All about Spanish Jamon - A Spanish tradition

All about Spanish Jamón (Spanish Ham)

Spanish Jamon - Spain is famous for many great foods, but non greater than the Jamón.

The Spanish tradition of ham making dates back more than 2,000 years to when the Romans controlled most of the country  For hundreds of years, cured ham legs were a specialty reserved only for royalty and clergy, it wasn’t until the 13th century that ham made its way to the general population.  Today the average Spaniard eats more than 7 pounds of cured ham a year.

Spain produces around 40 million hams a year, including varieties of the famous jamón serrano made from the dry-cured legs of the white pig and produced in regions such as Teruel and Trévelez in eastern Spain. Some of the finest Jamon is produced in the west in Dehesa which is an ecosystem of prairie-like grazing land dotted with encina trees, (known as holm oak in English) and in the regions of Salamanca, Extremadura, Andalucia and across the border into Portugal.

You will find a massive variation in price and quality. The most important variable is the breed of the pig.

This ham is considered the lower-level, everyday Spanish ham– though quality (and price) of Serrano ham still varies greatly.  This is a cured country ham made from conventional pork, cured in sea salt and hung.  A year to eighteen months later the jamones are ready.  With no cooking required.

You can spot ham made from white pigs by their hooves, which are also white or light brown.

There are three types of Serrano ham which is classified based on how long it has been cured.

Reserva – cured between 12 and 15 months

It is also worth trying some of these Serrano hams.

Jamón de Trévelez
Produced from white pigs which have been fed on commercial cereals, this is still a very fine ham, which fans say has a sweetness that comes from the climate in which the pigs are reared.

Jamón de Teruel
The first jamon in Spain to receive DO status, (Denomination of Origin) these mountain hams must be aged for at least 12 months after curing before being sold.

The best Spanish hams come from Iberian pigs, a dark-haired, black hoofed ancient breed that is known for its marbled meat. You can pick out the Iberian hams at the market or at a restaurant by the colour of the hoof, which are black. 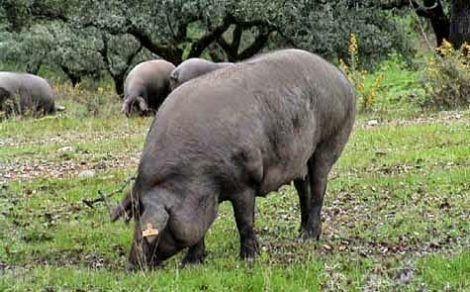 If the ham is sold already sliced and packaged, look for coloured labels that will tell you what type of ham it is.

Iberian hams are broken into three quality categories based on the pigs’ diet:

De bellota- The most prized hams in all of Spain. These pigs forage for acorns (bellotas) in open fields for most of their lives. Look for a black tag on these hams, which signifies it is a full-bred Iberian pig fed nothing but acorns.  Only about 5 percent of Spanish ham bears a black tag. Red tags also mean that that the pigs have roamed free in acorn orchards, but are a cross between Iberian and usually Duroc breeds.

De cebo de campo– These are what you might call “free range” pigs. They forage for their food in open fields, eating wild plants and some acorns. Because they do not eat nearly as many acorns as de bellota pigs, they are considered inferior in quality. Cebo de Campo pork gets a green label.

De cebo- These pigs are raised on cebo, farmed feed, and eat little to no acorns. Think of these as your conventionally farmed pigs. About 70 percent of all ham in Spain falls under this category, which bears a white label.

Curing these giant hams (25-30 pounds each!) takes time. Some of the best hams are cured 5 years or more.

Embutidos
The rest of the pig is not wasted and these other cured products are also well worth seeking out.

Chorizo de cerdo ibérico
A cured sausage made from chopped pork, pork fat and paprika. There are hundreds of regional varieties, some containing garlic and herbs.

Lomo de cerdo ibérico
The cured tenderloin of the pig. Señorio De Montanera make a stunning version covered in lard made from the fat surrounding the pig's kidneys.

Spanish Jamon is best eaten with a glass of vino, but is also used in lots of recipes such as

Corn on the Cob with Chile, Goat Cheese, and Ham 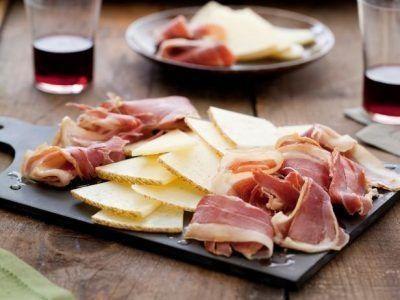