The places below will always advertise a rate slightly higher than everyone else s.

Do not be fooled you will only get the higher rate if you are changing over a large amount of money normally in the region of 2,000€, but they don´t tell you that until it is too late, and their normal rate is actually lower than it should be.  This is quite clearly stated, but people still fall for it. 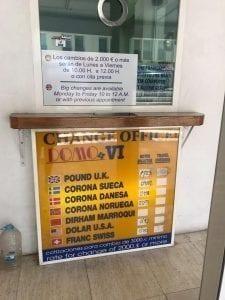 Always read the small print before signing anything, once you have signed there is no going back.

Between the hotels Sol Pelicanos and Flash

There is also another place to avoid, which is next to the Benidorm Centre Hotel, on Calle Gerona, towards the Old Town on the Avenida del Doctor Orts Llorca.

Over the last few months you may have noticed that a lot of new ATM machines have been installed all over the town.... DO NOT use these unless in an emergency.  The reason there are so many of these around is because they make money out of people using them...... 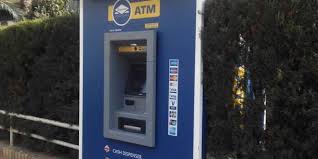 If you use a local Spanish bank card these machines are not to bad to use, but as a tourist using a foreign Bank Card, you are likely to loose up to 20% of your money on withdrawals and fees.

Firstly these machines give you the option to withdraw large amounts of money ie 1000€, they will then give you the worst exchange rate they can (decline their conversation offer), not only that but you may be charged up to 5 pounds with every transaction, as stated above this can amount to you loosing up to 20% of your hard earned money.

Always try to use the ATM machines at the main banks, where you will get a better exchange rate and will be charged less commission, (commission rates will vary depending upon your bank, so read the small print).  Also as a safe guard always inform your bank that you are going on holiday in Spain, that way they will be expecting some withdrawals from your account in Spain, if you don¨t do this you run the risk of having your card blocked.

Where ever you are in the world always use the Local Currency so if paying by card accept the EURO option in the shops.