BENIDORM FIESTA DATES FOR 2023 *NOTE: These dates are for guidance as events can be changed or cancelled without prior notice.

During EVERY fiesta you will see Mascletas listed on the schedules, these are the loud, thunderous firecrackers. They are fired randomly, particularly during the day. They are not for the faint hearted, they are really loud. The fireworks provide a spectacular view, but the Mascletas are meant to stimulate your body through rhythmic sounds and vibrations.

January 5th - The 3 Kings Parade, Grand Procession, unmissable if you are in town - The parade generally starts at around 18.00 from the Parque de Elche (Dove Park) in the Old Town, the parade will go up the Avd de los Almendros and back down the Avd Ruzafa before finishing up at the Town Hall square and finishing off the evening with a fantastic firework display.

The Carnival is an annual celebration, the date is dictated by when Easter falls, the Parades always take place on the Saturday before Ash Wednesday (22nd Feb 2023), this year the parade will be Saturday 18th February, there are 2, a children’s one in the morning around 11.00am and a main adult one in the evening about 9.30. The procession starts at the top end of Calle Ruzafa (nr Crystal Park Hotel) and ends up at the main Town Hall Square. There will be plenty of elaborate costumes. The Carnival finishes on Shrove Tuesday 21st February 2023 with the ritual Burial of the Sardine. This signifies the beginning of Lent. This is a solemn procession which again begins around 9.30 starting at Plaza Mayor, goes through the Old Town and ends up at Poniente Beach where the sardine is buried. (Times are subject to change), don’t forget to take your camera along…you’ll see some fantastic sights! The traditional Valencian festival of Saint Joseph the carpenter. Originally a contest amongst carpenters to create an effigy of the Saint, it has escalated to become one of the most spectacular fiestas of the calendar year. Festivities include processions with participants wearing elaborate traditional costumes, street entertainment, fireworks and live music.  For more details on this fiesta click HERE The Benidorm Elvis Festival - Running from 21st to 23rd April.

This is the largest themed Elvis party held in the Mediterranean. Join countless 1000´s of likeminded Elvis fans in this Three-day spectacular in the Hotel Melia and other venues nearby venues with top Elvis acts providing the entertainment. Fiesta of the Holy Cross, many districts in Benidorm will decorate holy crosses with flowers and organise holy processions through the streets.

The main event is 1st May and begins at 08.00 with the ringing of bells in the churches of San Jaime and Santa Ana, followed by a parade. At 11.00 festival entities and authorities will travel in pilgrimage from the church to the foot of the Creu (the cross), where the blessing of the municipality will take place.  After the offering of flowers, mass will be celebrated. The program of the Festa de la Creu ends on Tuesday, May 3rd with a mass of the deceased in San Jaime at 19.00.

16th – Fiestas of the Virgen Carmen. Head down to one of the Port areas in Benidorm, Altea or Villajoyosa where you will see beautiful floral processions through the town streets, ending at the Port when the local fishermen will go out to sea on a number of small fishing boats. From there the flowers are thrown into the water in remembrance of all who have lost their lives in the past and the present day to the Sea

July 25th – St Jaime Fiesta (St James Day) – St James is the town´s patron saint, and all the usual religious parades can be seen in the old town.  It is also the National Day of Recognition for the Spanish Military and if there are any navel frigates in the area many of the marines will come ashore to celebrate.  Expect quite a lot of cannon fire.

There are NO fiestas in August, but an incredible amount of cultural and artistic events. There are live concerts most nights in the Aiguera Park auditoriums, including ballet, opera, theatre and performances by leading popular international and Spanish groups and singers

A series of flamboyant events leading up to the Playa Levante big parade on the Saturday.

visitors can expect an exciting week in the resort that truly never sleeps. The main attraction for visitors is the old town which is where you will find the pumping heart of the gay village still very much local and Spanish where we visitors can blend in and mix with our lovely hosts. Enjoy up to 30 hugely friendly but small and intimate gay bars and eateries all nice and each other. 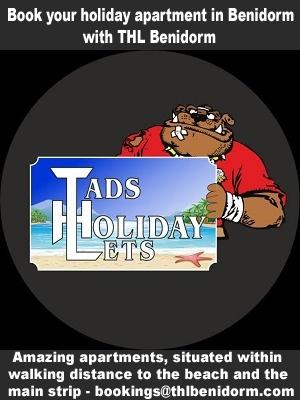 Dates vary – They always begin on the Friday of the second weekend of November and officially end the following Wednesday.

Each town has its Patron Saint, and a fiesta is held in their honour which usually last one week. During this time the towns commercial activity virtually shuts down as celebrations go on practically 24 hours a day. Festivities include processions, dancing in the streets, live music, sporting events and firework displays. In Benidorm the Patron Saints are the Virgin of the Suffrage and Saint James the Apostle. The most outstanding acts during the week are the staging of the finding of the Virgin, the flower offering, the comic parade, the parade of floats and the great firework display which takes place on the last day of the festivities.

This webpage will be updated with a full schedule of events, just a few weeks before.

Benidorm Fancy Dress Party, the biggest in Europe! Once the Benidorm fiestas finish in November, the unofficial British fancy dress party starts on the day after. One of the greatest highlights of the year, and a must for all to take part and dress up. Visitors have to do great efforts to showcase a spectacular day of fun, colour and an amazing atmosphere.

Takes place during the third weekend of November and is one of the most endearing and oldest in Benidorm This Fiesta is similar to a thanksgiving or harvest festival. The burning of the artichoke takes place in the Square in front of The Royal Queens Hotel. In the afternoon around 17.00 the square will be filled with music by local DJs

Later in the evening 21.00 a popular beer drinkers contest is held, and the Crema (burning) of the artichoke takes place at 23.00, music and partying continues until around 02.00.

New Year's Eve December 31st How better to end the year than at a traditional Spanish New Year's Eve party (Fiesta Cotillon) in front of the clock in the square. Free champagne and live music provide the entertainment. Don’t forget your 12 grapes which are eaten one by one on the strokes of midnight giving you luck in the year to come. PUBLIC HOLIDAYS FOR THE VALENCIA REGION 2023

Public Holidays are a national treasure as there are so many of them each year!! They include a mix of religious Roman Catholic, national and regional ones and are taken on the exact day they fall whether that be midweek or weekend. The holiday is not moved to the Monday or Friday to create three-day weekends as is often done in other countries. This means that a large percentage of people take days off, a ‘puente’ which means bridge, to create long weekends which last for four or five days! Known as ‘red days’, each municipality is allowed to have a maximum of 14 public holidays per year; a maximum of 9 of these are chosen by the national government and at least 2 are chosen locally.

BENIDORM FIESTA DATES FOR 2023 NOTE: These dates are for guidance as events can be changed or cancelled without prior notice.