Benidorm News - Local Police officers in Benidorm have arrested a man for brutally assaulting an 86-year-old woman whilst trying to steal the chain she was wearing around her neck. The events occurred this Tuesday, the 20th. The assult took place on the corner of Avenida Cuenca/Calle Ibiza and in broad daylight.

The victim  aged 86 and her husband were walking through this area of Benidorm when a man approached the woman and pushed her to the ground, once on the ground, according to the victim's statement the arrested "repeatedly hit her" pulled off an ear earring and then tried to pull her necklace off her neck. "Because he couldn't rip it off, he stretched it with all his might," causing the lady "various bruises on her neck." The victim reportedly defended herself by biting him in the forearm to prevent him from suffocating her, the woman at this time was "was running out of breath."

The victim's husband also tried to prevent the assault, beating the suspect with his cane, he managed to get the robber off his wife and the assailant ran off.

At the time, several witnesses to the events stopped a motorized Local Police patrol who were in the area. According to witnesses, one of the officers stayed to provide aid to the victim,  an ambulance attended the scene where the victim received care and medical treatment.  Meanwhile the other police pursued the suspect in a high speed chase.  At the time of the assault the suspect was wearing an orange hoodie, during the chase this was removed in an attempt to loose the police offers, but to no avail. 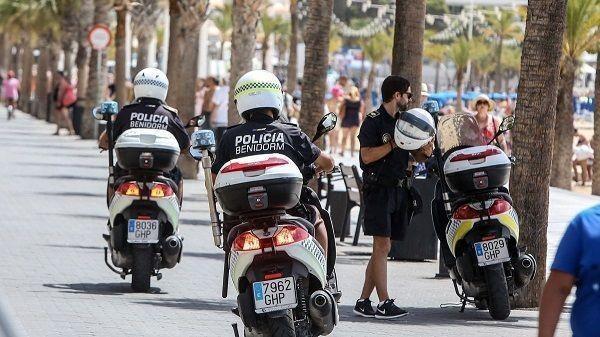 Local Police arrested the suspect in the middle of his escape.

Local Police caught the suspect on Calla Jaén, where he was arrested.  After his arrest, local police officers transferred the detainee to the Rincón de Loix health centre, where he was initially assisted before being transferred to the National Police Station.

The defendant, who responds to the initials A.A., was a 32 year old man of Bulgarian nationality. According to police, he is a habitual criminal of the so-called "guiri zone", where he would apparently offer sexual services to also commit criminal acts.

Please note the article above has been translated from Spanish to English, so some detail may be lost in this translation, read the original article at Diarioinformation

READ ALL THE LATEST NEWS FROM BENIDORM

Dazza
This comment was minimized by the moderator on the site

What’s wrong with people
Deport him send him back to we’re he come from but make sure he gets a very long prison sentence.
Hope the lady is ok

Well done to the Local police and we hope the lady makes a speedy recovery.