Benidorm´s famous Square to be renovated

11th April - A slight delay for unknown reasons to the renovation of the square but at last work has finally began.

Updates 2nd January 2021 - Benidorm is putting out to tender the renovation of Calle Mallorca.  The bidding period ends on February 8th.  The work covers the section between Ibiza and the Mediterranean, one of the main enclaves of British tourism, and which will become entirely pedestrian as the town hall have decided to add to the works, by extending the pedestrian area south of Calle Gerona to join the Av Mediteraneo.

José Ramón González de Zárate, has stated work "could be already underway by the end of this month. 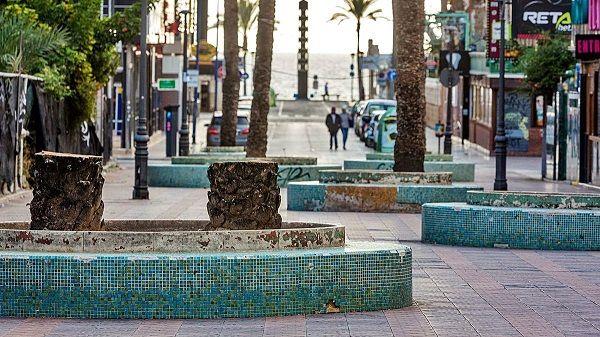 This renovation covers the stretch of Calle Mallorca between Ibiza and the Mediterranean and is valued at around 945,000 euros, which is financed through the 2020-2027 Renewal Fund of the water contract.

All  lighting will be renewed with the installation of "powerful" LED luminaires as it is a section "with a lot of passage of people"; the entire section of work will be repaved with asphalt printed in different colours. The project also includes “maintaining the existing palm trees and replanting the missing ones”. 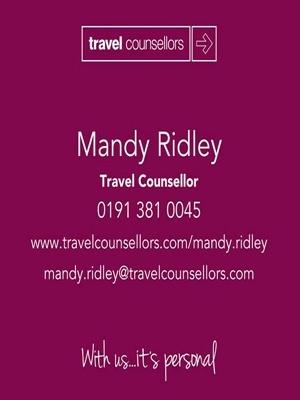 18th November 2020 - The City Council takes advantage of the total closure of business and the lack of British tourists to renovate the subsoil and give a new image to Avenida de Mallorca.  The project will be an incentive for the reopening of the international market and return of British Tourism.

Radical change inside and out. Benidorm City Council will take advantage of the "emptying" of British tourists in the city to completely renovate what could be called the heart of the *guiri area. That is,  Avd Mallorca, better known to many as "The Square·, which is a mostly pedestrian road where bars, hotels, pubs and nightclubs are concentrated frequented mostly by the British and which are currently closed due to the lack of customers caused by the pandemic of covid-19. 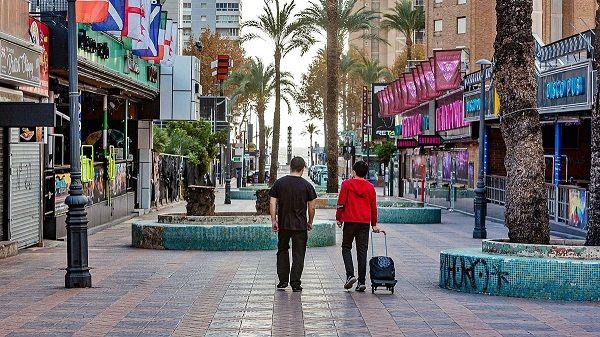 A stretch of Mallorca Street, which shows an advanced state of deterioration and which now the City Council will reform taking advantage of the absence of Britons in the area. | DAVID REVENGA

Benidorms famous Square to be renovated

The local government board has already approved the project of infrastructure renovation and reform of this road, which has been developed at the request of the City Council itself the water concessionaire, Hidraqua. The Councilor of Works, José Ramón González de Zárate, explained that the work will involve an investment of about one million euros and will cover an area of about 300 linear meters, in the stretch that goes from Calle Ibiza to Avenida Mediterraneo.

It will be a comprehensive reform; mainly, because the project proposes to renew all public services, from drinking water and stormwater networks, to sewerage and lighting, as well as to completely improve the urban scene of this street, which today is in an advanced state of deterioration. 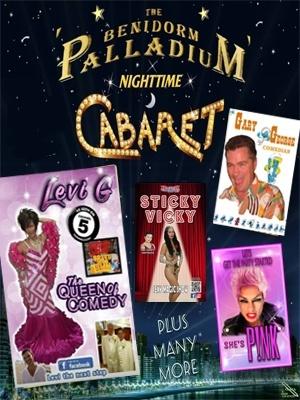 The work will allow infrastructure renovation to also make water management more efficient and prevent leaks in the grid. This has been moved by González de Zárate, who explained that hydraulic infrastructure "is in poor condition, with losses in the drinking water and sewerage network. It is the time to act to improve efficiency and reduce maintenance costs, replacing the current conduction of drinking water and the creation of a wastewater collector that connects with the new infrastructure of The Avd  Mediterraneo". Finally, it is also planned to replace the storm network, incorporating a new one, as well as the installation of hydrants.

As far as the urban scene is concerned, one of the performances will consist of the renovation of all the lighting with the installation of 'powerful' LED luminaires, as it is a section with a lot of passage of people'. Likewise, from the consistory it is also planned to pave the entire pedestrian section, which runs between the streets of Ibiza and Girona, as well as the road of the area open to traffic – between Girona and the Mediterraneo. The project includes the maintenance of the existing palm trees on this street and the replanting of the missing ones, which have been cut down in recent years and have never been spared until now. De Zárate has advanced that technicians are rated the use of printed concrete "of different colours and very striking" for the pedestrian section, so that the new design of the street is also an incentive for the return of British tourists once the health situation allows.

The local government has already given the green light to the project presented by Hidraqua. The next step will be to tender and start the works. José Ramón González de Zárate advanced that the intention of the popular is "to tender in two or three weeks, to be able to start work in early 2021", to take advantage of the little or no activity that is currently in this area due to the closure of borders and the quarantine imposed in the United Kingdom. "The idea is to try to execute the bulk of the work before the area's hotels, pubs and establishments reopen, so that when tourists arrive it is finished or very advanced," added the responsible councillor, who en suited the deadlines and the project is completed for the start of the new tourism campaign.

*zona guiri -  A colloquial Spanish name used in Spain applied to foreign tourists, particularly from countries in northern Europe or the Anglosphere. They are strongly associated with beach tourism and commonly stereotyped as blonde with pale skin and often drunk.

Please note the above has been translated from Spanish to English, some detail may be lost in this translation, read the original article in Spanish HERE at DiarioInformation

Have they decided where to rebuild the Western Saloon yet

more or less in the same spot

I think we can all agree on that, but that is nothing to do with budgets for maintenance but the police department.

Why hasn't the work started on Calle mallorca? Are they waiting for all the holiday people to arrive!! And the Mayer & Counciler needs to take a look at it from calle ibeza to calle kennedy, it badly needs renewing as well!!

Not sure to be honest, but there is a lot of work going on in the general area at the moment x

The whole of calle Mallorca should be renorvated, the paveing from calle ibiza to calle Kennedy is a disgrace all cracked and bodged up with plain white concrete in places.......

The Square is being renovated as reported above, ie the area where Cafe Benidorm/Beachcomber etc are.<br /><br />I presume your comment is referring to the Western Saloon, which is in the area commonly known as the Strip. The Western as you know...

The Square is being renovated as reported above, ie the area where Cafe Benidorm/Beachcomber etc are.<br /><br />I presume your comment is referring to the Western Saloon, which is in the area commonly known as the Strip. The Western as you know it has been taken down and will be being rebuilt.

Definitely and great news for the area.