Britons die after taking Spanish painkiller Nolotil - Update 13th November 2020 - Over 200 People who have been affected by the side effects of the painkiller Nolitil start a group action legal claim against the manufacturers and distributors.  The claim is for 500 MILLION euros.

At least 10 Britons have died after taking one of Spain’s most popular painkillers, which is already banned in United States, the United Kingdom, Sweden, and most recently India.

The medicines regulator in Spain confirmed back in October that it had launched an investigation into concerns that northern Europeans may be more at risk of side effects from the drug Nolotil, this drug is also know as metamizol. 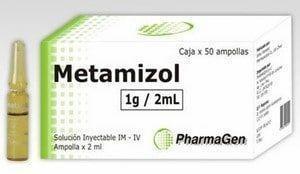 More than 100 British and Irish expatriates and holidaymakers in Spain have suffered devastating side effects after taking the drug. Read the story HERE

Nolotil  was first used medically in Germany in 1922 under the brandname "Novalgin" and for many years it was available over-the-counter in most countries, until its toxicities became apparent. Metamizole is marketed under various trade names.

It is primarily used for preoperative pain, acute injury, colic, cancer pain, other acute/chronic forms of pain and high fever which is unresponsive to other medicines.

Metamizole has a potential of blood-related toxicity (blood dyscrasias), but causes less kidney, cardiovascular, and GI toxicity than non-steroidal anti-inflammatory drugs which is why it has been used in the past (NSA-IDs).

Serious side effects include agranulocytosis, aplastic anaemia, hypersensitivity reactions like anaphylaxis and bronchospasm especially in those with asthma, toxic epidermal necrolysis and it may provoke acute attacks of porphyria, as it is chemically related to the sulfonamides The relative risk for agranulocytosis appears to greatly vary according to the country of origin of the patient.

The main compound of Nolotil is Metamizole. which can have a powerful analgesic, antipyretic and spasmolytic effect. The AEMPS also say in its official statement that Nolotil should only be sold with a prescription and that the results of a previous blood test should be available to avoid its use in patients with agranulocytosis risk factors, (a deficiency of granulocytes in the blood, causing increased vulnerability to infection) in short  it is not advisable to prescribe it to tourists.

The Spanish Agency for Medicines and Health Products (AEMPS) has banned the sale of Nolotil to British citizens after “the recent notification to the SSistema Español de Farmacovigilancia of cases of agranulocytosis which lowers the defenses and promotes the development of sepsis or multiple infections. It can even cause death, particularly in patients of British origin",

Link to the official Notice