One of the first biggest events of the year is the Benidorm Carnival.

The Carnival is an annual celebration, the date is dictated by when Easter falls, the Parades always take place on the Saturday before Ash Wednesday (26th February), this year the parade will be Saturday 22nd February, there are 2, a children’s one in the morning around 10.00am and a main adult one in the evening about 8.30.

There will be numerous parades through the Old Town, ending in the City Hall of Benidorm, next to the l’Aigüera’s park. The carnival will last until Sunday 25th with the traditional Burial of the Sardine.

The procession starts at the top end of Calle Ruzafa (nr Crystal Park Hotel) and ends up at the main Town Hall Square. There will be plenty of elaborate costumes.

Children's Carnival
10: 00 h: Concentration  at Calle Escuelas
10: 30 h: Departure with the following route:
Ruzafa, Herrerías, Plaza Doctor Fleming.  Finishing at la Plaza de SS.MM Reyes de España.
At the end of the parade a lunch will be distributed to all Participating children dressed up.
Playground in the Plaza de SS.MM Reyes de España and children's performance
At the end, the awards ceremony and a Candy candies.
Bar with popular prices.

Carnival Adult
20: 30 h: Concentration in Calle Tomás Ortuño.
21: 00 h: Departure with the following route: C/Venus, Ruzafa, Herrerías, Plaza Doctor Fleming.  Finishing at la Plaza de SS.MM Reyes de España..
At the end of the parade, snacks will be distributed and refreshments to all registered participants.
Next, party presented and entertained by the 40 MAIN. During the party will proceed to the delivery of awards.
Bar with popular prices.

Some roads will be closed for the processions.

25th February The Burial of the Sardine

21: 00 h: Concentration in the Plaza Mayor to carry out the funeral to our dear Sardina
21: 30 h: Beginning of the funeral procession with the following route:
Pl. Mayor, Tomás Ortuño, Schools (first stop), Ruzafa, Rioja,  Paseo de la Carretera  Finally on the Paseo de Colón  where the incineration of the sardine will take place along with some fireworks followed by finishing Party at Penya el Llondro in Calle Apolo XI

NOTE - The above has been translated from Spanish 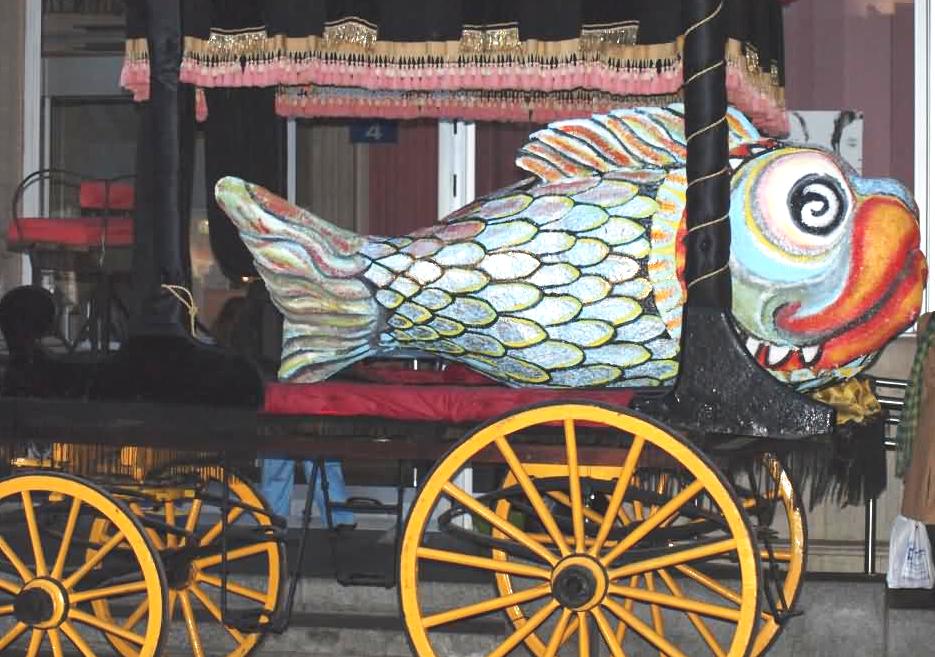 The burial ceremony came to replace older Spanish customs which were held to mark the end of the winter and is symbolic of the arrival of Spring, it is also seen as a good luck ritual to ensure the fishermen, who can now venture back out to sea without fear of the winter storms, had good hauls.

It’s also a symbolic burial of the past. The ceremony is stripping away the past, in a socially established ritual of chaos, burning out the mayhem of carnival and the long winter months, and ushering in from the ashes a new year, a society reborn and serious once again, ready to face the hardships of the future.