You’ll be hard pushed to find a tapas bar in Spain that doesn’t serve this dish. Yes I know it originated in Russia… but the Spanish have adopted it and made it their own. Enjoy!  Russian Salad, or in Spanish Ensaladilla Rusa

Half a dozen medium sized potatoes, peeled, diced and boiled until tender
A couple of roasted red peppers- diced – these are optional, but the ones in jars are great for this
Small tin of tuna, drained
A dollop or two of mayonnaise – according to taste
2 or 3 hard boiled eggs – grated, lightly mashed or crumbled 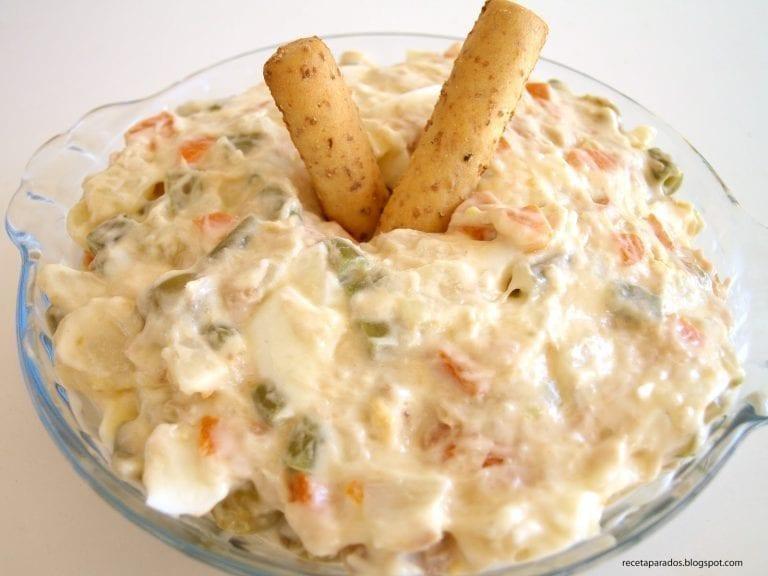 There’s not a lot to really add to this… but follow your instincts. If there’s something you don’t like omit it… well apart from the potatoes of course. But feel free to add a couple of extra flavours if you want to. I quite like the following – feel free to mix and match
a small amount of really finely diced red onion for some crunch and tang
a couple of fistfuls of olives – sliced as a garnish
a fistful of finely diced apple
Fistful of peas, cooked and cooled
Sliced cornichons (gherkins / pickles) – sliced
cherry tomatoes – halfed or quartered. But add those as a garnish rather than in the mix

You can press the salad into a mold, and refrigerate. or just serve it in a large bowl for people to help themselves… but it’s nice to do for a party if you’d rather be mingling than serving

Sangria and Tinto Verano Recipes - These are just the perfect drinks to enjoy on a hot summers day or whilst relaxing on a hot balmy summers night but you will hardly ever see the Spanish themselves ordering Sangria, they much prefer Tinto Verano.

Sangria’s origins probably date back to the Middle Ages, during a time when water was unhealthy to drink and drinking fermented beverages carried a much lower risk of causing illness. During this time, people would mix wine, which was much lighter and less potent than what we are used to today, with spices such as cinnamon.

The word “sangria” comes from the Latin word for blood, thanks to the original sangria’s reddish hue, a result of the red wine first used to make it 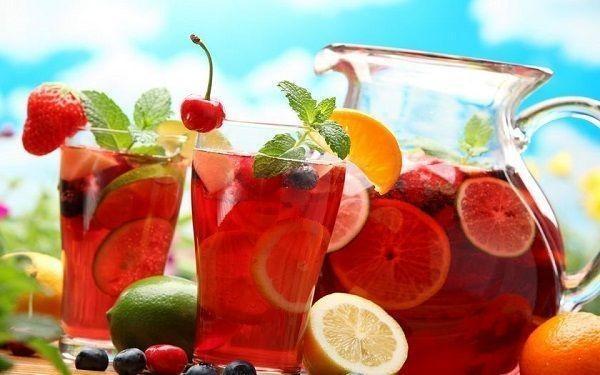 Mix all the ingredients together in a large jug and add more red wine, orange juice or lemonade according to tase and desired strength.

Pour into glasses, garnish with mint sprigs and ice.

1 1/2 cups seedless grapes sliced in half

1 can lemonade or soda water

In a large pitcher combine the wine and sugar, stir until the sugar has dissolved.  Add the remaining ingredients apart from the lemonade/soda and mix well.  Place to chill in the fridge for between 1 - 4 hours.

Just before serving add the lemonade/soda and ice.

Orange liqueur to taste (Cointreau or Grand Mariner, for example) 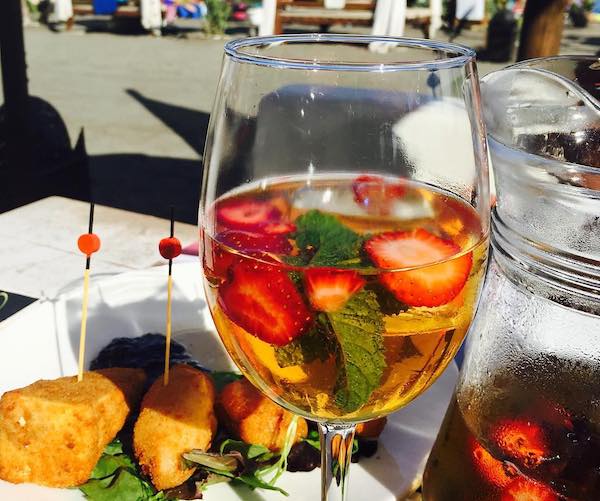 Chill all the ingredients in the refrigerator until cold.

In a glass pitcher, mix the orange juice, lemon juice, and orange liqueur.

Add sugar if you prefer a sweeter drink.

Peel and chop the fruit and add it to the pitcher.

Slowly pour the cava over the mixture in the pitcher. 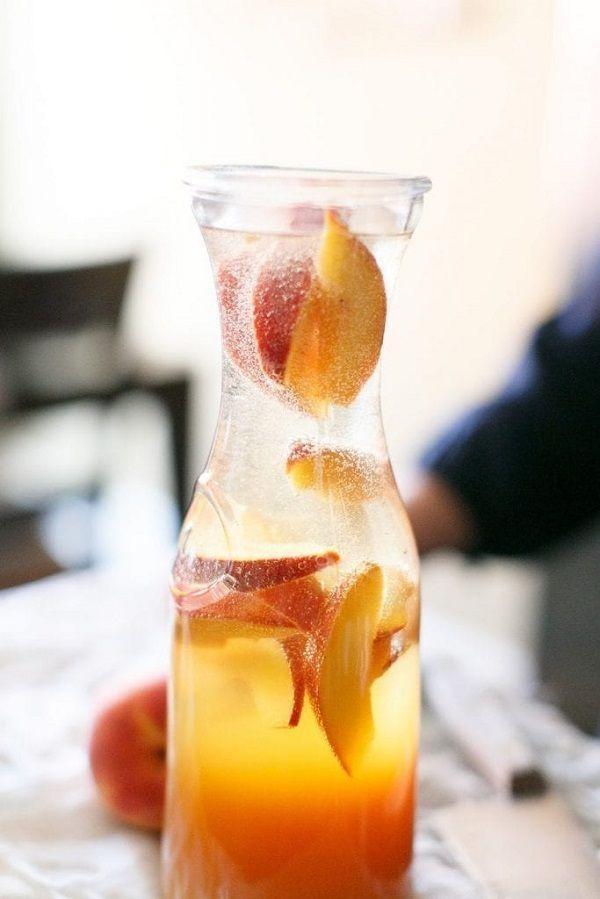 At least 1 hour prior to serving, combine brandy, peach & nectar. Allow it to infuse.

The name “Tinto de Verano” translates into English as “Red Wine of Summer.” It is a refreshing wine cocktail served in summer all over Spain. Although similar to sangria, it is easier to make and has less alcohol in it, making it the perfect to sip at a pool party or at the beach on a hot afternoon. Although the Spanish use what they call “gaseosa” or “Casera” which is a lightly sweetened soda, you can use any lemon-lime soda. If it is too sweet for your taste, add a splash of soda water or seltzer.

In a tall glass of at least 20 ounces, place 3-4 ice cubes. Add red wine and soda. Garnish with a lemon slice.

It is not important what variety of red wine that you use in this cocktail. Our rule on wine punches and cocktails is this: If you wouldn’t want to drink the wine by itself in a glass, then don’t use it in a punch or cocktail. You don’t have to use your best wine, but using a decent table wine will prevent you from having a bad hangover.

Find lots more Spanish Recipes in this section of the website

Share your own EASY SANGRIA AND TINTO VERANO RECIPES in comments below.

Spanish Garlic Mushrooms,  Champinones Al Ajillo.  This is a wonderful Tapas dish, often served as party food. Easy and quick to make and fantastic flavours. Also great as a side dish!  This dish is often served as part of a Tapas meal, alongside many other dishes.

Enjoy with a glass of Sherry or a cold beer, serve with some warm crusty bread to mop up the juices!

Garlic, did you know? Some studies have shown that one of the health benefits of eating fresh garlic is to help people improving their immunity system and eating fresh garlic regularly could help you reducing the high blood pressure level and promote healthier cardiovascular system.

1. Quarter the mushrooms, chop the parsley, crush the garlic.

2. Over a medium heat, add the olive oil and saute the mushrooms for a few minutes. Then add the remaining ingredients EXCEPT the parsley. Cook for a further 5 minutes, stirring. Then remove pan from heat, add the chopped parsley and stir through

Serve hot with some crusty bread.

Caramel vodka is regularly served as shots here in Benidorm, but if you are missing it at home, try this simply homemade caramel vodka recipe.

You will need a bottle of vodka (the cheap stuff is fine, but Smirnoff is tastier)

a packet of Werther’s Original (approx. 135g) and a sterilised Mason Jar. 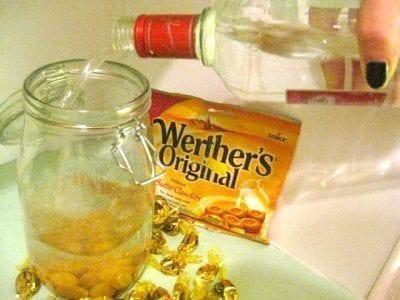 Simply mix the bottle vodka with a packet of Werther’s Original sweets in a mason jar.  Cut the sweets up for a quicker and stronger infusion.

Shake every few hours over 2 to 3 days until the sweets have dissolved and a frothy head has formed. If you want a smoother vodka you can choose to filter the vodka using a coffee filter at this point.

*Please note it will not look like the caramel vodka you can find in the shops which is clear, this will have a creamy look to it, but tastes just as delicious*

When Sealed, store in a cool dark place for up to three months, shake well before serving.

Or for a creamy version 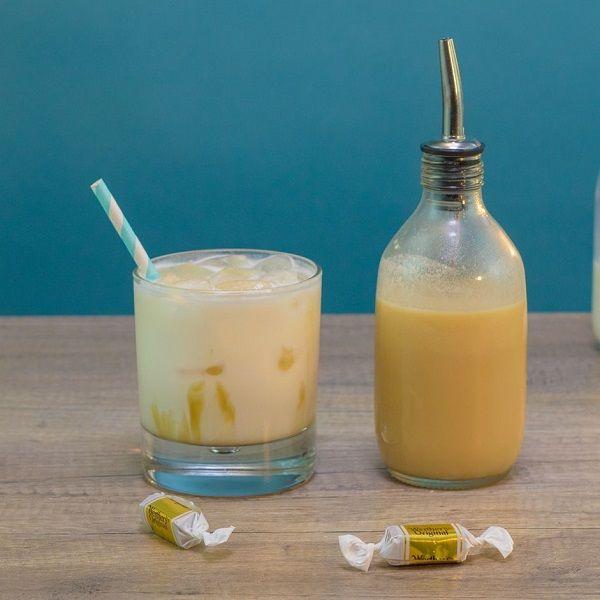 Chuck a bag of Werther's Originals in a bowl, and pour a bottle of vodka over the top.

Stick it in the fridge for three days, shaking frequently, strain, add 250ml cream, and whisk.

Pour back into the empty vodka bottle, and serve in shot glasses.

Wash them in boiling water, dry them, and put them in the oven at 100C for 10 minutes.

Smirnoff Vodka, Did you Know?

Pyotr Smirnov,  was responsible for what has come to be known as the world’s #1 vodka. Born as a serf in Russia, Smirnov lived out a true rags-to-riches story by becoming one of Russia’s richest men by the time of his death in 1998

Pyotr Smirnov began making vodka in 1964, using only the finest ingredients to make his brand of vodka the most prestigious. To market his product, he became one of the first people to advertise in newspaper ads and even made charitable donations to the clergy to keep them from preaching anti-vodka sermons.

Smirnoff survived through periods of political unrest and factory strikes in Russia, and later was introduced to Europe in the 1920s and America shortly after that. It is now a best selling brand on both sides of the Atlantic, being sold in over 130 countries.