HOW TO AVOID HAVING YOUR DRINK SPIKED

HOW TO AVOID HAVING YOUR DRINK SPIKED

Avoid having your Drink Spiked - Every year across the world, hundreds of people are thought to be victims of drink spiking, where alcohol or drugs are added to someone's drink without them knowing. In some cases, so-called 'date rape drugs' may be used to spike a drink before a sexual assault.

Drink spiking may be done with the intent of stealing from the victim, assaulting the victim or as a prank.  Whatever the reason, drink spiking is illegal and can result in prison sentence for anyone who is found guilty.

If an assault, rape or robbery has also taken place, the sentence will be very high

Sexual assault is an act that is carried out without the victim’s active consent. This means they didn’t agree to it, even if they have taken drugs or alcohol voluntarily.

What substances are used to spike drinks?

Alcohol is the most common substance used to spike drinks.
It can be added to a soft (non-alcoholic) drink without you knowing, or double measures can be used instead of singles.

Drugs used in drink spiking are often referred to as "date rape drugs", although they are not always used for sexual assault.

Some examples of drugs that have reportedly been used for drink spiking include:

Tranqulisers - most often benzodiazepines, including Valium (diazepam) and Rohypnol

Date rape drugs are particularly dangerous when mixed with alcohol, because they combine to have a very powerful anaesthetic effect. In extreme cases, it can lead to a coma or even death.

Date rape drugs may come in powder, tablet or liquid form, and don’t always have an unusual taste or smell.

This is how quickly and easily it can happen.

Avoid having your Drink Spiked

How do I know if my drink has been spiked?

Most date rape drugs take effect within 15-30 minutes and symptoms usually last for several hours. However, if you pass out it will be hard to know the full effect. You may still feel some of the symptoms of a date rape drug after a night’s sleep.

Although your symptoms will depend on which substance has been used, they usually include some of the following:

loss of balance and finding it hard to move

feeling confused or disorientated, particularly after waking up (if you've been asleep)

paranoia (a feeling of fear or distrust of others)

hallucinations - (seeing, hearing or touching things that aren't there) or having an "out of body" experience 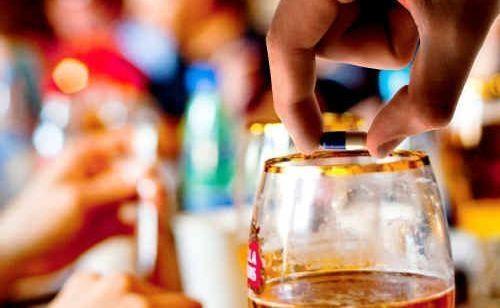 How to Avoid having your Drink Spiked

If your drink has been spiked, it's unlikely that you will see, smell or taste any difference. Some drugs, such as GHB, may taste slightly salty or smell unusual.

If you start to feel strange or more drunk than you should be, get help immediately.

Binge drinking - where you drink lots of alcohol in a short space of time, can increase the risk of having your drink spiked or being the victim of a sexual assault.

Try to avoid drinking too much alcohol, especially in unfamiliar situations. You could lose control, make risky decisions and become less aware of danger.

Stay with the drink service. If you are offered a drink by somebody you have only just met or barely know, stay at the bar as the drink is ordered and served. You will be able to see the bartender make it and hand it across the bar. Or, request that drinks be brought to the table by staff.

Drink bottled drinks or cans over glass drinks. If you are not with people you can trust, have your drink from a bottle and watch the top being removed by the bartender.

Hold your drink on the top. If you get a glass drink, hold it in such a way that your hand covers the top of the glass. Holding it with your palm over the top instead of against the side of the drink will make it harder for anyone to slip anything in without you noticing.

Always keep an eye on your drink. Do not leave your drink unattended for any time. Give it to a friend to guard or finish it off before racing off to dance or visit the bathroom. If you have to leave it and you return uncertain as to its safety, leave it and get a new one.

Accept drinks only from people you trust. If you cannot keep an eye on the serving of your drink, or you have any misgivings about the person offering you a drink, it is best to politely decline. If you are having drinks with friends, you will usually be fine; and ask them to keep an eye on you if you do go off with anyone unknown during the night so that if anything untoward does happen, someone else will be onto it straight away.

Avoid sharing other people's drinks. This could be a ruse to lull you into a false sense of security. Never grab a drink or steal one off someone you don't know; you never know what is in their drinks and just because they can handle it doesn't mean you can.

Look for obvious signs of tampering. Things such as your drink being moved from where you left it, the straw having been taken out or one put in, less or more liquid than you remember, odd bubbling or fizzing, a different color or odor, floaters of any kind, empty medicinal packets next to the glass or on the floor, etc.

Cease drinking anything that tastes funny. When you drink something that tastes off or unusual, stop right there and have no more. Immediately presume that the situation has become unsafe and either leave as soon as possible, or grab a friend to stay with or, better yet, leave together.

Don't give out your address/hotel room and number etc to someone you've just met.
Before going out, let someone know where you're going and what time you expect to be home.
Make plans for your journey home.
Avoid taking expensive equipment with you or anything that could be a target for thieves.
If you are travelling abroad, be aware of the local area and where you can find help.

What should I do if I think my drink has been spiked?

First, tell someone you completely trust, such as: a close friend, a relative, a medical professional, the police dial 112 - for a full list of emergency phone numbers click HERE

If you aren't with anyone, call someone you trust and get to a safe place. Ask to use a phone if yours has been stolen.

If you need urgent help, call 112. Be wary of accepting help from a stranger and don’t leave with someone you don’t know.

If you feel unwell, someone you trust should take you to the nearest A&E or the 24 hour medical centre. Tell the medical staff that you think your drink has been spiked.

Arrange for a trusted friend or relative to take you home and stay with you until the drugs have fully left your system.

Report it to the police as soon as you can. They may ask you to provide blood and urine samples.

If you have been physically assaulted, robbed, or both, you should report this to the police. They will want any information you have about your attackers, such as:

The police will need to keep a record of your injuries, and you may need to receive medical treatment.

If you have been sexually assaulted, you should get medical attention as soon as possible. You may need tests to determine whether you have any  sexually transmitted infections or whether you are pregnant.

You don't have to report an attack to the police immediately if you don't want to. but the sooner you do the better.

Any forensic evidence that is obtained during tests can be stored while you decide whether to report the attack to the police.