The name of the dish Paella comes from the vessel it is cooked in, quite simply a “La Paella”. This is a Valencian word and describes the round shallow pan with two handles that the ingredients are cooked in and traditionally then served in directly from the fire. The dish we all know and love today originated in Valencia and was a poor mans meal that has developed into one of Spains most popular and beloved dishes with variants of the recipe across the different provinces in Spain.

Some La Paellas are huge and you may have seen them being used at social occasions for large parties as the showcase centre piece.

Paella was originally the meal of peasants, cooked over an open wood fire in the rice fields that they worked in. The original dish was made of the rice from the fields and anything else they could throw in... Onions, tomatoes, snails, green beans anything for taste and texture. Duck and rabbit were also popular when available and this dish soon became such a popular meal of convenience that on special occasions chicken and saffron were added.

Due to the location of Valencia the Mediterranean Sea soon became a resource for the dish and sea food was added to the recipe. A real Valencian Paella today though is still the traditional peasants recipe and has no shell fish added and is simply a choice of chicken, duck, or rabbit, snails, green beans and garbanzos. 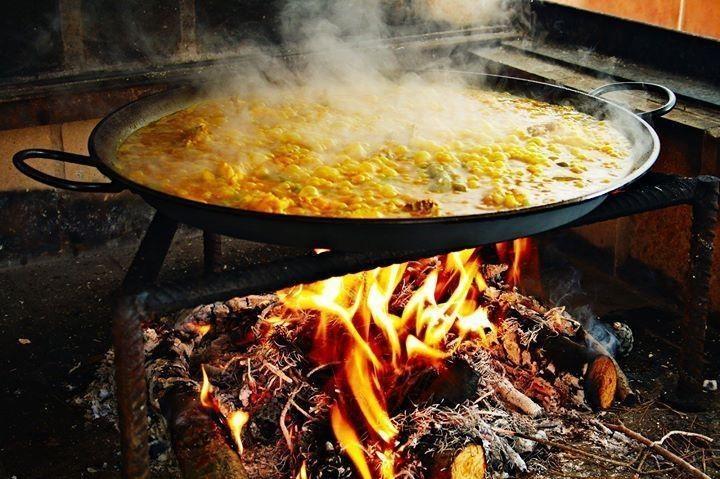 This is the typical Spanish paella. This recipe is the best known one throughout Spain and is prepared with a tomato, pepper, onion and garlic sofrito. Water must be measured well for this dry rice dish to be sure that the rice doesn’t become overdone. Specifically, if you want to prepare paella, use two glasses of water for each cup of rice. Rabbit is the premium meat used for this dish.

This is the typical Sunday paella in Spain. People often sunbathe in the countryside and make this recipe with chicken for their family. It is very important to add a good amount of black pepper and paprika so that the meat will absorb the flavour, in addition to red peppers and peas.

This is one of the recipes that best define Mediterranean cuisine. Also known as paella marinera. It is usually prepared with squid, prawns, mussels and clams. It is one of the most popular dishes in coastal areas and, in summer, it is very commonly eaten on beach bars.

Mixed paella combines two flavours: Meat and seafood. It is also one of the most popular dishes and is usually cooked in every house. It is made using the meat sofrito and then adding squid and prawns. It has a very strong taste as the tender meat takes on the flavour of the seafood.

This Paella looks totally different from the rest, because the rice becomes black due to octopus or squid ink. The ingredients are the same as the seafood paella, but this additional affects not only appearance but also the taste.  If you like strong tastes, this is the paella for you; give it a try!

White paella is very simple dish to make which, nevertheless, achieves excellent results. The ingredients that accompany the rice this time are ham and salami. These are mixed without adding colouring, giving the dish a white appearance.

The basic ingredients are: artichokes, asparagus, mushrooms and olives. It’s a different combination which doesn’t detract from the original dish and you can try if you fancy a light lunch.

Although it may be classified together with seafood paella, its unusual flavour sets it apart. This is a very much sought after recipe which is cooked often in Huelva, becoming one of the top dishes. This province is well-known for its seafood and this variety is not usually mixed with other ingredients. If you come to this area, don’t forget to order this delicious treat for your taste buds.

9. PAELLA WITH PORK IN BEER

This paella is harder to find in restaurants but in coastal areas, it is often prepared upon request. Lean pork meat is used instead of chicken or rabbit, which gives a completely different texture from the rest. Part of the secret in this recipe is also beer which is added when frying the onions. The alcohol evaporates after five minutes but leaves that taste of barley soaked in rice. An interesting dish, it is served most often in summer.

10. PAELLA MADE TO TASTE

Paella is really a different way of cooking rice. This ingredient is loose and dry, which is the essential part of paella. Although this is the main secret of this Spanish dish, the positive thing is that you can cook it in a thousand different ways. Although some recipes are widespread, you can make paella to your own tastes. The rice absorbs the flavour of any ingredient you add, and you can mix as you please. There are many restaurants which allow diners to choose what items to include in their paella. As such, if you come to Spain with very specific tastes, add them to this dish and it will give you fond memories of good Spanish cooking