This is not a national holiday but one for the whole Valencian Region, of which Benidorm is part of, it is a day off for the general population, and schools and most businesses are closed.

Most stores are closed, although some bakers and food stores may be open. Public transport services may run to a reduced schedule. Parades and other public events may cause some local disruption to traffic, especially in the centres of towns and villages.

Known as 'Día de la Comunidad Valenciana', this holiday commemorates the capture of the city of Valencia from Moorish forces in 1238 by King James I of Aragon.

Founded as Valencia by the Romans, the city passed from Christian to Moorish control from the 8th century to the 13th century.

In the spring of 1238, King James I of Aragon laid siege to Valencia and after five months, the Moors finally surrendered on 28 September. On 9 October, James took possession of the city.

Whilst many people from different religions were allowed to stay, fifty thousand Moors were forced to leave. After the Christian victory the city was divided between the forces who had participated in the conquest.

James granted the city new charters of law (known as the 'Furs of Valencia'). The changes brought by James redefined the city and the region in many ways, forming the basis of the character and key traditions of the Valencian region.

The Valencian region gained full autonomy within Spain in 1982.

The autonomous community of Valencia's flag is widely displayed on the Day of the Valencian Community. It is based on the heraldic symbol of the ancient kingdom of Aragon, known as the Senyera. This flag has been in use since 1159. Valencia's flag is often displayed with the national flag of Spain and the European flag. The flag of the Valencian Community and of the city of Valencia, known as Reial Senyera (Valencianpronunciation: [reˈjal seˈɲeɾa], "Royal Senyera"),

October 9 is also the Day of Saint Dionysius (Sant Dionís), a saint also known as "the Areopagite". This saint is traditionally considered as the patron saint of lovers and there is the custom of giving the gift of a Mocaorà, a silken scarf containing marzipan pastries handcrafted by Valencia’s confectioners. Valencian men traditionally give their sweethearts gifts of marzipan sweets on this day. These sweets are wrapped in a piece of silk or placed in a decorative box.

This is a National Holiday and celebrated all over Spain. Schools, businesses, offices, banks etc will be closed.

The king of Spain supervises the raising of the Spanish national flag in the centre of Madrid on Hispanic Day. He and the prime minister lead a military parade after that. The parade includes representatives from most of Spain's military units and various military vehicles. Armed forces' planes perform aerobatics above the parade route and display yellow and red smoke to represent the Spanish flag. Radio, television and Internet news services broadcast live on these events.

Hispanic Day is a day off work and an opportunity to spend time quietly at home or in the company of family members and close friends.

This national holiday commemorates the exact date when Christopher Columbus first set foot in the Americas. 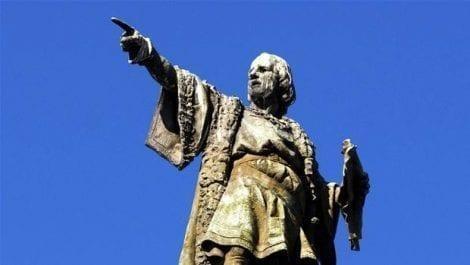 Columbus was attempting to find a western sea route to India. After leaving the Canary Islands, Columbus' ships had been sailing west for five weeks, when on the morning of 12 October 1492, land was spotted.

The sighting is recorded as having been made by a lookout, but Columbus insisted that he had seen a light from land a few hours earlier, therefore making sure that he was awarded a lifetime pension from the Spanish Royal family for being the first person to spot land.

They then made landfall at an island in the Bahamas, which he named San Salvador, though it is not sure which islands in the Bahamas this actually was.

Columbus' voyages across the Atlantic Ocean initiated the European exploration and colonization of the Americas.