This page will be continually updated with any Ryanair updates 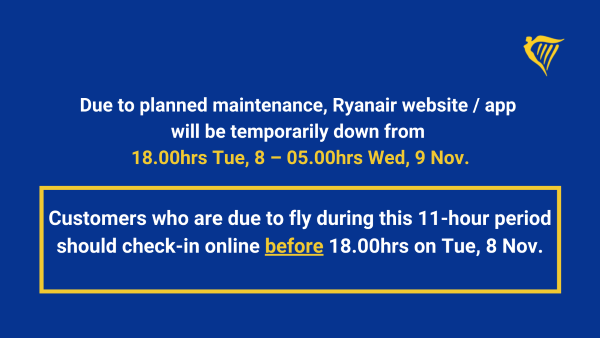 Information on other airlines can be found here

13th October - From 28th October until 7th January (unless they come to an agreement) all Ryanair ground staff in Spain are going on strike. This affects 14 airports including Alicante.

Handing staff includes check-in staff, ticket desk, baggage handlers, gate staff. What does this mean? Well, expect delays basically as bags will come out late, be boarded late, check in queues longer - perhaps only 2 desks open instead of 6/8. The minimum service levels mentioned below should still have to be in force.

9th August - You may have seen in some tabloid newspapers the reporting of the Ryanair cabin crew strike in Spain being extended until Jan 7th?? what hasn't been reported much is that the Spanish government department of transport has set by law a "minimum service" level of 83%..... limiting by doing this the effects of any action. This minimum service level is set to drop during the months to January 2023, but never below the 75% figure. This means that the action will see very few if any cancelled flights to/from Alicante, with any action likely to be restricted to delays, which would mainly be from Monday to Thursday. Ryanair has pointed out that the actions so far have affected just 1% of the total number of their flights.

27th July - Ryanair's Spanish cabin crew union members plan strikes on four days of every week until January 2023 to press demands for higher pay and better working conditions, a leader of the USO union said in a statement on Wednesday.  They are also looking for reinstatement of members dismissed during the strikes in July.

The strike action, which is backed both by the USO and Sitclpa union groups, will take place from Monday to Thursday during every week from Aug. 8 to Jan.7, the statement said

27th June - A total of 54 flights with origin or destination Spain were cancelled yesterday (up to 19.00hrs), by Ryanair, due to the third day of industrial action by Spanish based air crew. Malaga airport was most affected with 20 flights cancelled, followed by Barcelona with 14 cancellations....With the rest spread between the other eight airports affected. There were numerous delays across the board. Three more days of action are planned, 30th Jun, and July 1st and 2nd.

25th June, so far during these strikes there have only been several delays, but no cancellations - If your flight has been affected by any disruption, you will receive an email and SMS notification from Ryanair.

Ryanair staff are set to walk out on June 24th, 25th, 26th and 30th and July 1st and 2nd, due to discontent about working conditions and pay.

This would affect the ten bases the company has in Spain, those of -Madrid, Málaga, Barcelona, Alicante, Sevilla, Palma, Valencia, Girona, Santiago de Compostela and Ibiza. This by no means signifies that there will be no flights on those days, action to be taken by the cabin staff has yet to be decided.

While UK Ryanair staff have not announced a strike, the industrial action could impact Brits flying to Spanish destinations this summer.

They will stop flights from Belfast international to six destinations – Alicante, Málaga, Kraków, Gdansk, Warsaw and Milan – by 30th October.

And they will withdraw eight services from City airport – to Alicante, Barcelona, Faro, Ibiza, Mallorca, Málaga, Milan and Valencia – on 12th September.

Ryanair blame government passenger duty and the absence of any Covid recovery incentives.  “Due to the UK government’s refusal to suspend or reduce APD [air passenger duty], and the lack of Covid recovery incentives from both Belfast airports, this winter. Ryanair will cease operations from Belfast international and Belfast City airport from the end of the summer schedule in October, and these aircraft will be reallocated to lower-cost airports elsewhere in the UK and Europe for the winter schedule, which starts in November,” it said in a statement issued on Tuesday.

Ryanair pulled out of Derry airport earlier this year.

Yet another blow for the travel industry.

Ryanair has stepped up its war against online travel agencies , which it accuses of charging high commissions for an unnecessary intermediation service. The low-cost airline on Wednesday issued a warning to customers about the "fake" boarding passes provided by the travel site Kiwi.com and has informed that they will no longer be accepted by the airline.

Ryanair state that in accordance with EU regulation 2015/1998, it is mandatory for passengers to complete Ryanair's check-in process directly to ensure they are informed of all necessary regulatory and safety protocols when travelling. However, it considers that Kiwi.com circumvents these aviation regulations by issuing its own boarding passes, "which are not valid on Ryanair flights".

Therefore, from this Wednesday (18th Aug), any Ryanair passenger with a boarding pass issued by Kiwi.com will be denied boarding for not having complied with Ryanair's safety and security protocols during check-in. Customers who wish to retrieve an official boarding pass can do so by accessing their reservation through Ryanair.com or on the airline's app.

Ryanair urges travellers to only book directly on its website or mobile app and to avoid buying through third-party agents who are not authorised to sell Ryanair flights or to issue boarding passes.

Ryanair has obtained a court order in the Czech Republic requiring Kiwi to stop replacing customers' email addresses with fake email addresses, preventing the airline from communicating directly with its passengers.

Other online travel agencies may also be affected by the above.

Ryanair implemented the "Verified Seal",  which is a guarantee for customers that they are booking directly on Ryanair's website.

Dara Brady, Ryanair´s Marketing Director said in a statement that customers who have booked through Kiwi.com should contact the agency to obtain the Ryanair booking reference.

3rd February - Ryanair has been ordered to remove an "irresponsible" advert depicting misleading claims about coronavirus vaccinations by the advertising watchdog. (advert pictured below)

The Advertising Standards Authority (ASA) said it had received 2,370 complaints about the advert - which was shown from December to January - making it the third most complained about advert of all time.

Ryanair stated the advert was meant to be "uplifting" and did not consider the content was insensitive to people who had had COVID-19 or who had lost people to the virus".  Others felt the advert trivialised ongoing restrictions and effects of the pandemic.

Ryanair have once again come up with an advertising campaign that seems to have upset many and has caused massive backlash all over social media. The new television campaign tells travellers to “jab and go!”.  This advert show a gloved handholding a syringe and a vial labelled “vaccine,” .  The advert is also on the front page of their website. 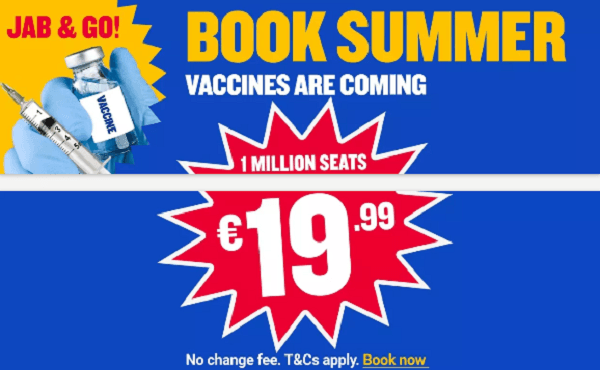