Sticky Vicky retired on 13th February 2016 after being a Benidorm legend for many many years.  No trip to Benidorm was complete without seeing her act.

NEWS UPDATE 2021 - Demaria Leyton (María Gadea Aragues) carries on the family tradition and returns to the stage after announcing her retirement back in April 2017 See when and where you can see Demaria perform HERE. 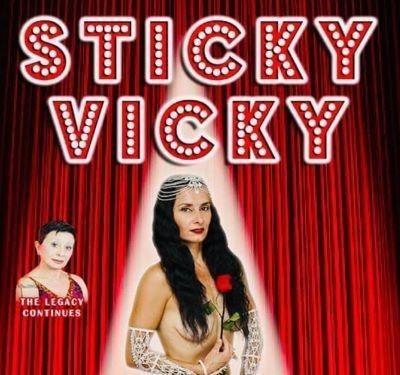 The history of Sticky Vicky - The Early Years

Victoria´s mother, María Gadea met her husband whilst travelling, in Santa Cruz De Tenerife, sadly he became an alcoholic and was wanted by the police he eventually left his wife and children, Maria was just 20 years old and his eldest daughter Victoria (Sticky Vicky) was three, so the early days for the Gadea family were very tough. 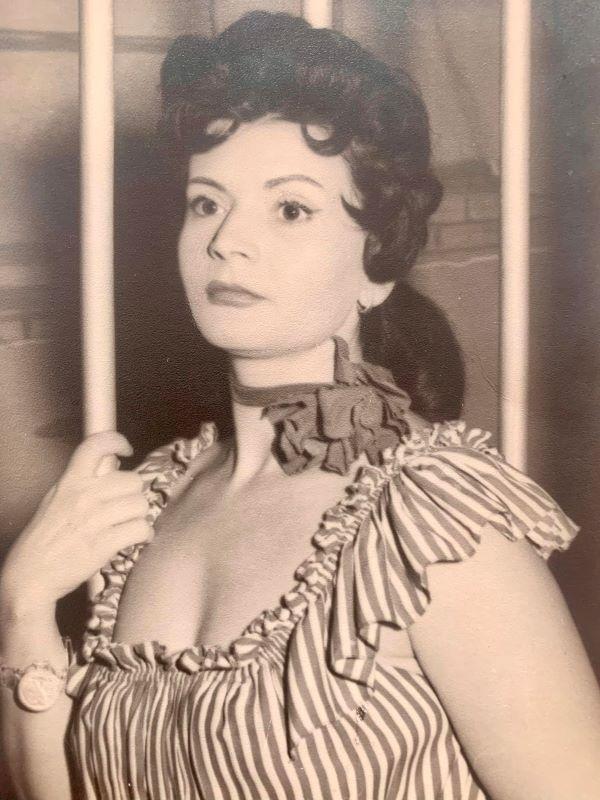 Sticky Vicky comes from a family of artists, and military, her father and grandfather were military and army musicians.  Vicky´s grandmother was a also a talented opera singer and her mother sang Zarzuela.  (Zarzuela is a type of Spanish musical theatre which is very dramatic and is a combination of song and speech. Most zarzuelas work as trios and duets, solo songs are known as romanzas, it also contains various types of local folk music and dance).

At the age of 6 the family moved to Barcelona to be with her grandparents.

Sticky Vicky was only 8 when she began her dancing career with her sister Chantal who was a contortionist.

When Victoria was around 11 years old, she began work in a radio factory on the assembly line later moving to another factory with her sister packaging baby food.

Did you know? - Victoria studied classical ballet for 15 years.

In the afternoons she attended classical ballet school, with a Russian teacher called Margot. 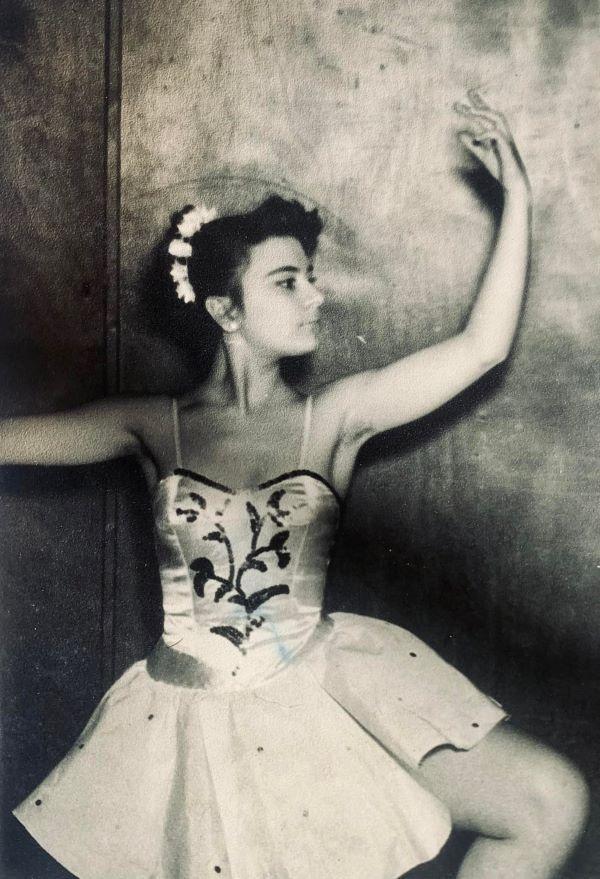 The sisters and a classmate from the ballet school were asked to go on tour with a show called "Women of the Championship", which was a show dedicated to a variety of dance styles, although this seemed like a great opportunity, Vicky was not happy as it was her dream to become a classical ballet dancer, it was also a disappointment for her ballet teacher who expected her to go far in classical ballet.  Vicky asked ​​an adult friend of the family to sign documentation renewing their work contract in the factory so they would not have to go on tour, and leave the ballet school which she loved, but this plan upset their mother who wanted to leave the theatre and accompany her daughters on tour.

The photo below shows Sticky Vicky (approximately 22 years of age) on the right and on the left her sister Chantal (21 years old). 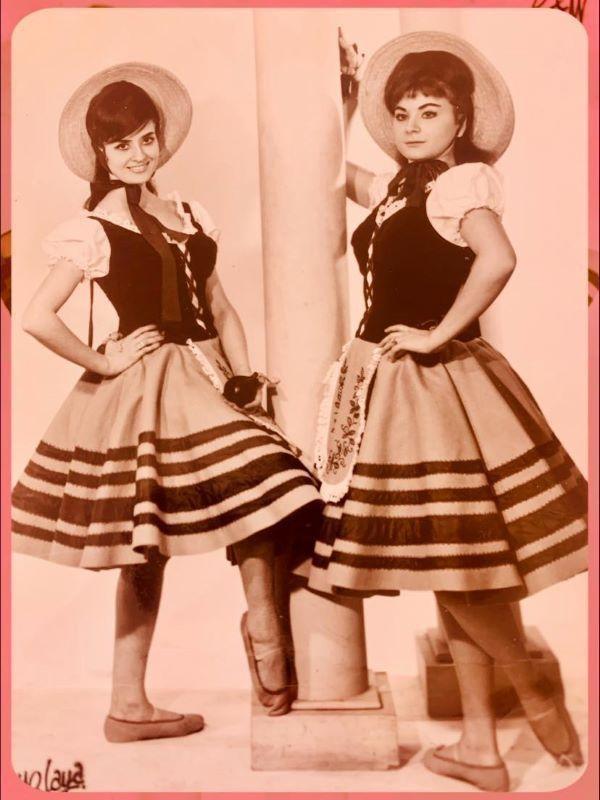 Below Vicky with her mother (María Gadea) and sister Chantel. Maria Sadly passed away at the age of 50. 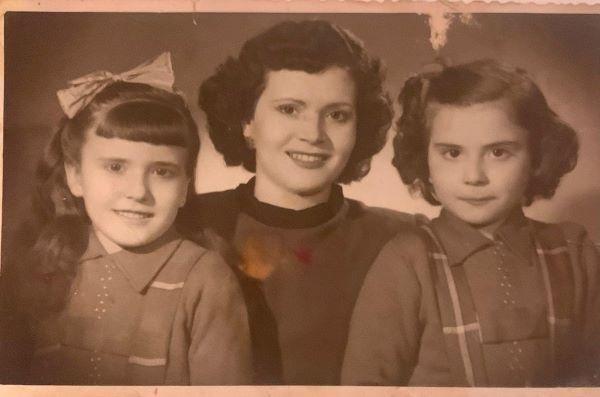 The sisters act began to be highly respected by other artists and the public and shared billboards and stage with many of the great artists of the time. 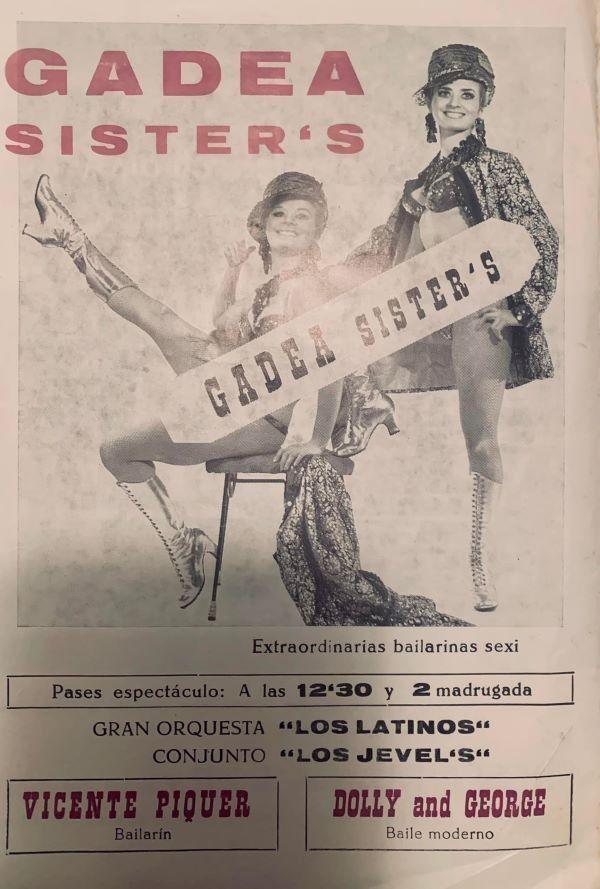 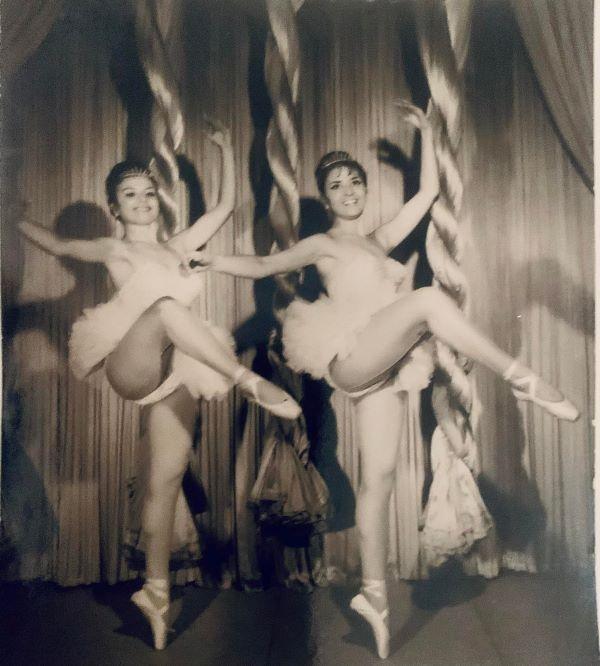 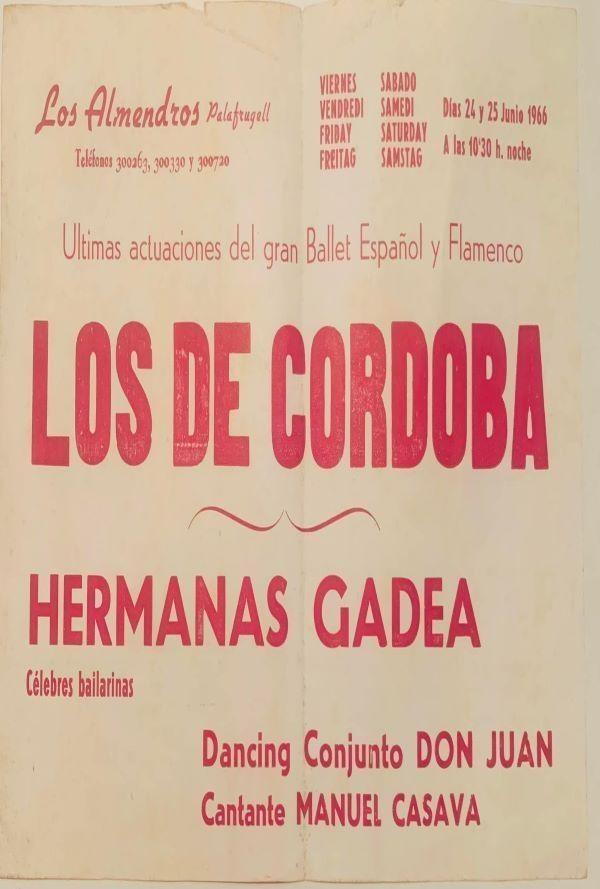 The sisters travelled all over Europe, and whilst in Sicily where Vicky was performing as a classical ballet dancer she met and fell in love with a Sicilian man who frequented the theatre, Vicky became pregnant and gave birth to a baby boy named Eduardo.

When Vicky became pregnant, she was told that it was Sicilian tradition that the family raise the child and she as a woman would not have a voice and would have to stop working, more importantly that this man was a dangerous mobster, after hearing this news Vicky and her mother returned to Barcelona and were later joined by her sister Chantal.  During her time in Barcelona, see became involved with El Molino theatre, which was known as Le Petit Moulin Rouge, where she was offered a job as their ballet choreographer. 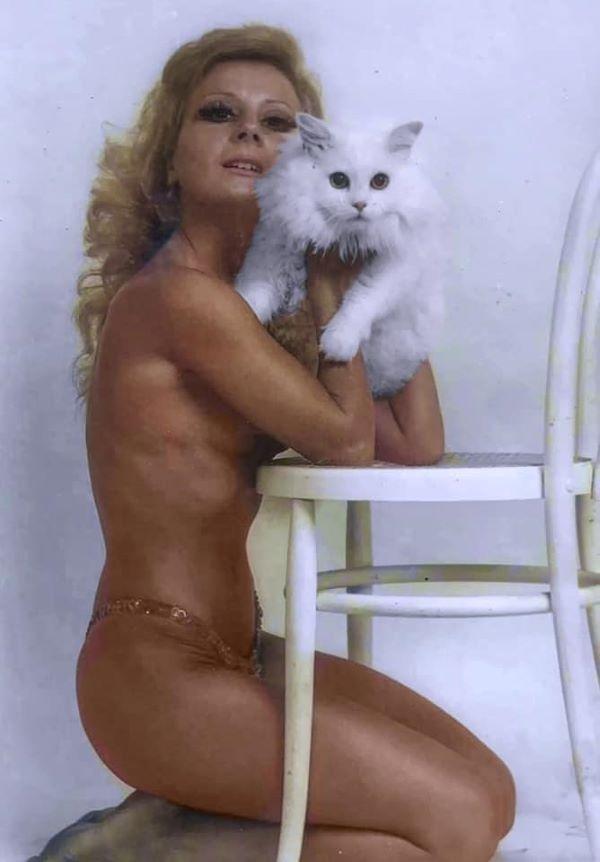 Vicky has two children Eduardo who has delighted her with two grandchildren and a grandchild and of course María Gadea Aragues known as Demaria who continues the family tradition with her famous artistic act here in Benidorm. 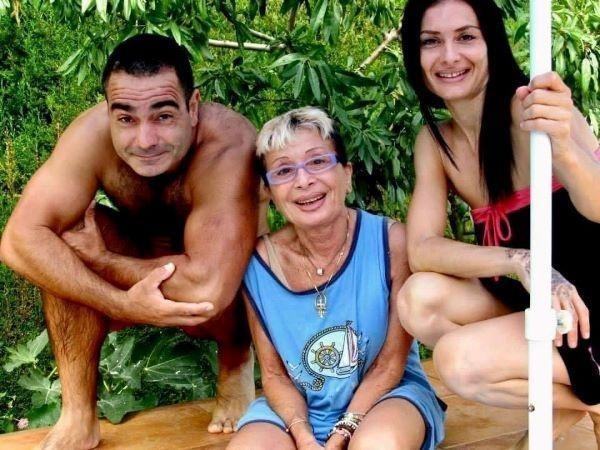 Life was tough in the early days as Spain was under the iron rule of General Franco which meant that even a glimpse of naked flesh was frowned upon.

With Franco´s death in 1975 Spain went mad with the sudden freedom and you needed to be doing something very different to get noticed. 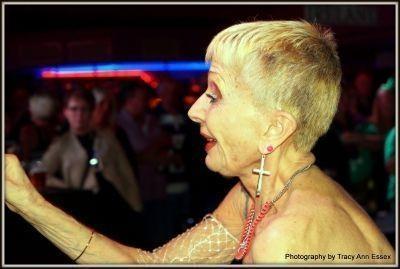 Vicky was told the place to get noticed was Benidorm and moved here from Barcelona where she was managing the La Molino theatre.  She realised on arrival in town in the early 80´s that she needed an act that was totally original, and a sexy magic show was certainly that, it took a lot of practice, and indeed a couple of nasty accidents (you know where) before she was happy with the show.

Her notoriety spread rapidly, and even after more than 30 years of performing the sexy magic show and right up until the day she retired she could fill any venue in Benidorm.

In 2001 Vicky sued her fellow performer, for using the stage name Sticky Vicky. Although Vicky won her case in the Benidorm court, the ruling was overturned on appeal by the Audiencia Provincial of Alicante, which, however, ruled that the name could be protected as a choreographic work. In 2009, and the court determined that María Rosa had acted in bad faith and generated confusion by registering the name and awarded Vicky the legal trademark for her stage name Sticky Vicky.

Their fame was not just limited to Spain, Vicky and Demaira attracted a huge amount of media attention back in the UK after being on the TV Series "Benidorm" and Demaria performed her first ever UK show in Blackpool in 2016. 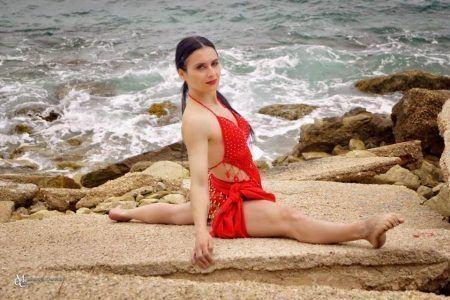 Behind the famous faces you will find two lovely ladies, who love nothing more than relaxing at the house they share, they enjoy looking after the garden and the multitude of pets they have. 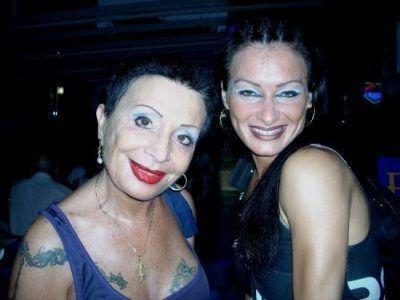 Maria and Vicky enjoying a stroll in Benidorm January 12th, 2022 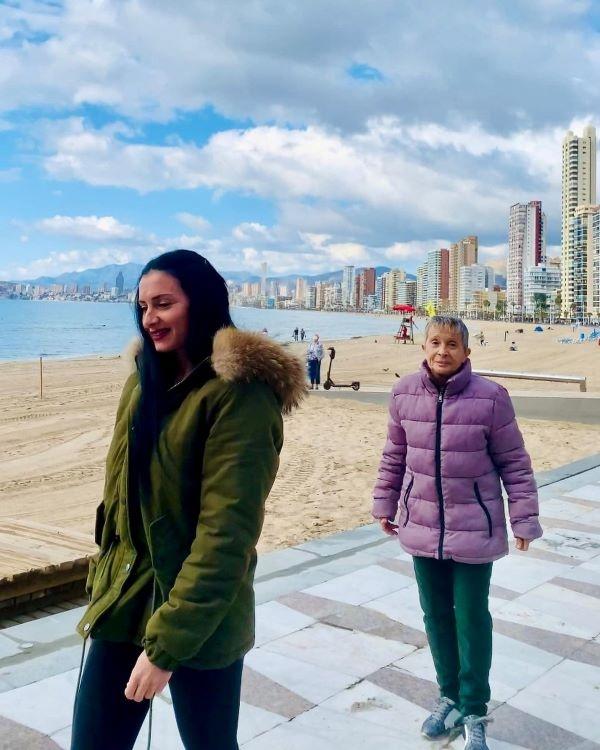