The History of Benidorm

THE HISTORY OF BENIDORM

Benidorm to many people equates with a modern day Sodom & Gomorrah, full of lager-crazed youths on a 15-day bender; stags and hens sleeping all day and drinking all night.

Obviously if you go looking for it then you will find plenty of evidence that such activity takes place, but its mostly in the area known as ‘The Square’ where you will more than likely encounter that sort of behaviour.

But there is another Benidorm; a very Spanish resort, that actually has a lot of history and its a great place to holiday and has something to offer everyone young and old.

Benidorm has existed since 1325 when it gained it´s town  charter from Admiral Bernat De Serria at Polop castle which was then part of the kingdom of Valencia. The giving of town charters was carried out until the 17th century as a way of removing the Moors and allowing Christians to inhabit the area. 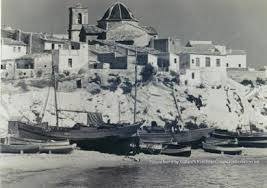 The first settlements in the area can be found at Montbenidorm a hill in Cala Finestrat that you can see at the far end of the Poniente beach. Here there are burial grounds and remains of an Iberian settlement that dates back to the first century B.C. Archaeologists discovered remains of fishing nets here firmly tying Benidorm to the sea even then. A figure of  Tanith who is a Phoenician goddess of fertility and the heavens was also unearthed here as were remains of Roman settlements nearby.

It is the long history of fishing which created the myth that Benidorm was a small charming fishing village when in fact it never was.  The fishermen of Benidorm were actually deep sea fishermen who spent many months in the Atlantic, South America and north of Spain. They were famous all over Spain for their skills with trap netting and were much sought after in the 18th century.

They had for many years used Almadraba netting an ancient Arabic tradition to catch Tuna by placing a maze of deep sea netting to progressively smaller inshore pools. A tradition which continued until the 1950´s at the Rincon De Loix to catch Tuna as they migrated across the Mediterranean.

Benidorm grew around the rocky outcrop now known as El Castillo (in the old town) but it´s beginnings were hampered by raids from pirates during the 15th century and the town was almost destroyed as inhabitants fled. In the 16th and 17th centuries the town was strengthened by the castle being rebuilt and made larger ( it is sad but today nothing remains of the castle). In 1665 the town really began to grow as water from inland was bought to the town along channels. This was the single biggest cause of the population increasing at this time. 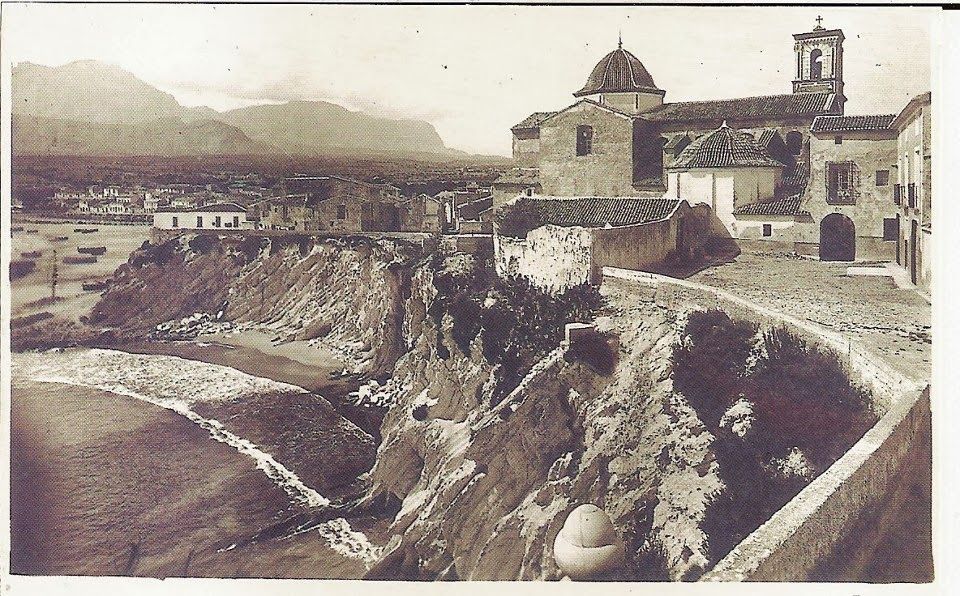 With water came agriculture and olive groves sprung up all over Benidorm with every spare meter of land being used to cultivate this valuable commodity as well as Orange and Lemon groves. It was the sea and agriculture that would maintain the town until the 19th century when the road to Alicante was built.

Once road access opened from Alicante and the national railway joined Benidorm to Alicante and other parts of Spain in 1914 the first tourists begun to arrive in Benidorm from Alcoi and Madrid. It was also at this time that Spain lost many of the colonies in South America so the much needed income from deep sea fishing began to decline. The first tourist hostals were built on the Levante in 1925 which was the start of the holiday industry for the town. The Hotel Bilbaíno was set up by Pedro Cortes Barceló and was the first hotel to be opened in Benidorm. It opened its doors in 1926 and ever since then has been in continuous operation on the seafront of this famous beach on the coast of Levante.

It was not however for another 30 years that the foreign invasion slowly began in the form of package holidays to the Costa Blanca.  In 1952 the Almadraba netting which had earned an income for many local families was closed in the Rincon de Loix now known as the Rincon in the center of the  Levante Playa tourist area of Benidorm. This meant a loss of income and the need for a plan to regenerate the town for it´s now dwindling resident population.

Alicante airport did not open until April 1967. Once opened this was the biggest contributing factor to     Benidorm´s success as a holiday resort, together with the introduction of modern jet airliners. These made flying more cost effective and for the first time enabled the ordinary family to enjoy a basic holiday abroad. This was the beginnings of the end for many seaside destinations in Britain such as the channel islands which saw tourist numbers decline rapidly as tourists headed to the beaches of Benidorm.  Passenger numbers reached 8.9 million in 2005 .

Benidorm was the model that all early holiday resorts were based on. The success culminated in 1977 when Benidorm entertained 12 million visitors a figure that has never been bettered.

A visit to Benidorm needn't lack contact with authentic Spanishculture. The Old Town in particular is an evocative maze of cobbled streets and inviting establishments to drink and shop in. With its blue-domed church and white houses, visit Tapas Alley for some authentic Spanish food and atmosphere.  Benidorm manages to retain its character amongst the forest of tower blocks to the east and west. Do yourself a favour and time your visit to coincide with one of the more than 55 fiestas that occur in Benidorm every year. For the main fiesta dates click here

The Bikini War and Zaragoza´s influence on Benidorm

When Zaragoza - took over as mayor of Benidorm in 1950 a former phosphate miner and railway porter.

This transformation of Benidorm was largely the work of Zaragoza,  who remained mayor for 17 years. Not that he initially envisaged development on such a scale: in the early days he visualised a small town with agreeable plazas and boulevards, lush gardens and comfortable hotels.

Having arranged for water to be pumped to Benidorm from 10 miles away to service the village, Zaragoza set about encouraging package tour operators who could fly planeloads of tourists to Spain. Initially he contacted airlines in Germany and Scandinavia, and came up with the less than snappy slogan "sun and beach" to attract visitors from northern Europe and the British started to flock to Spain.

With the British came  the bikini, leading to the most celebrated episode in Zaragoza's career as mayor. He had seen the two-piece swimming costumes in magazines, and knew that - in northern Europe - they were considered unremarkable. In Spain, however, they were banned by General Franco's regime.

In 1953 - on the principle that "you couldn't stop it" - Zaragoza authorised the wearing of bikinis at Benidorm. No one in the country had attempted this, and there was uproar. As members of the Civil Guard scuffled with scantily-clad girls on Benidorm's beaches, the local archbishop threatened to excommunicate Zaragoza, who decided to appeal directly to Franco.

At 6am one morning he set off for Madrid on his Vespa motor scooter, arriving in the Spanish capital eight hours later. "I changed my shirt but I went in to the General with my trousers spattered with motor oil," he later claimed. "He backed me, and the bikini stayed." 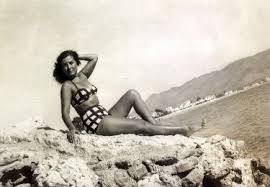 The Spanish economy had never really recovered from the devastation caused by the Spanish Civil War, which lasted from 1936 to 1939. Zaragoza realised that tourism was an opportunity to revive national fortunes, and his example was to be followed throughout Spain.

In 1956 Zaragoza approved plans to build the now famous avenues along the Levante which would welcome at first Spanish tourists and later those from Holland then Germany and later from Britain. However Benidorm is a Spanish holiday resort and the Spanish do make up the majority of visitors, despite the myth that Benidorm is today only for the British.

As Benidorm was gradually transformed, he became an enthusiast for high-rise architecture: "I realised that if we built upwards we could have more space around. People could be near the beach, they could have balconies, fresh air, a sea view." 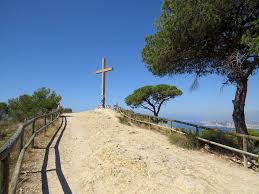 The first cross appeared on top of the Sierra Helada in 1962 and was the culmination of a mission by local Catholic monks to prove that the village had not lost it´s “soul” from the terrible “frivolous” Bikini wearing tourists. Deemed to be committing a terrible sin by wearing such clothes, or lack or clothes! at the time despite having permission direct from Franco to allow the Bikini on beaches, Just two years earlier the Bishop of Orihuela, Alicante threatened the then Mayor, Pedro Zaragoza that he would place signs on roads into the village stating that the Mayor and residents would likely go to hell for allowing the wearing of these “garments of sin”.

Today, visitors will see a large metal Cross  which was erected in 1975 and is made from parts of railway tracks. The original cross which was made of wood and erected in January 1962 was carried on the shoulders of the entire village from San Jaime church in the old town. The day became known as the “day of forgiveness” for the villagers, whom, by their very participation had proved that they were indeed spiritual and religious, unlike the tourists flocking in every increasing numbers for the sins of fun, sun and other such fleshy pastimes.

The views from the cross are spectacular both day and night it is well worth a visit to see the stunning views right across Benidorm and the surrounding area.

In 1954 Pedro Zaragoza Orts, the then young Mayor of Benidorm, created the Plan General de Ordenación (city building plan) that ensured, via a complex construction formula, every building would have an area of leisure land, guaranteeing a future free of cramped construction seen in other areas of Spain. It is the only city in Spain that still adheres to this rigid rule, and if you climb to the top of the Sierra Helada, the promontory at the end of the Rincon de Loix, you get a stunning view of how green the city is and just how close it is to the mountains.

Benidorm has to import sand from Morocco to maintain its beaches.

This little gem originated when a tour rep made a joke to his clients while on the coach bringing them from Alicante Airport to their hotel in Benidorm in the early 70s. Unfortunately his comment passed into media history. The resort’s seven kilometres of silky soft sand are absolutely natural, and the city is actually an exporter that supplies high-grade sand to a number of the local resorts.

Benidorm spends more on keeping just its beaches clean than most cities do on all their streets.

Alicante and; Benidorm in 1961