Spains most Popular Tapas Dishes, is yours listed?

Popular Tapas Dishes, but What is tapas?

Tapas are a variety of small savoury Spanish dishes, often served as a snack with drinks, or with other tapas as a meal. To “tapear”, going from bar to bar for drinks and tapas, is an essential part of the social culture of Spain, and is something that every visitor to Spain should experience.

Because tapas are informal, and the bars are often busy, they are commonly eaten standing up at the bar or at small tables or even upturned barrels, and the atmosphere is convivial and noisy. In most tapas bars you will see traditional cured hams hanging from the rafters.  The more rubbish on the floor the more popular the bar.

TO FIND OUT ABOUT BENIDORM´S FAMOUS TAPAS ALLEY CLICK HERE

History of tapas
There are a number of theories of the origin of the custom of eating small snacks with drinks. Legend has it that because of illness the thirteenth century Castilian king Alfonso X (the Wise) had to eat small snacks with his wine between meals to maintain his strength, and after recovering passed a law that wine or beer served in taverns had to be accompanied by food. More probably the origins were practical, with bread or a small plate of ham or olives being used to keep dust or insects out of the drink (the literal meaning of “tapa” is “lid”). It was also the custom for agricultural and other manual workers to eat small snacks so that they could continue working until the main meal of the day. 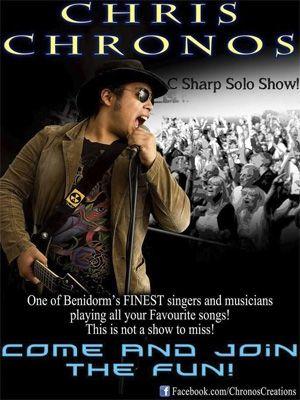 How to order
The first thing to do is check whether you can order tapas at the tables. In some places they only serve tapas at the bar and you have to order raciones (large plates) at tables or out on the terrace. Once seated, don’t order everything at once. Many tapas are already prepared and you could end up with 5-6 dishes arriving at once. Also, you may see something “walk by” that looks good, so best to start with just one or two tapas each and take it from there.

The barman will usually run a tab for you, which is paid after you have finished eating. Some bars, where food and drink is taken outside, charge with each round of tapas and drinks.  it is a general rule to tip 10% if you have been served at the table (and have had good service). If it´s only had a quick snack and a drink standing at the bar then just leave the change.

Tapas has evolved over the years and varies depending on region and the selection is vast to say the least and most are so beautifully presented that they look like little works of art. The British normally associate the word tapas with all the little snacks, but officially they are categorized as either tapas, pinchos and montaditos.  Traditionally Tapas come in little terracotta dishes, which can be hot or cold but need to be eaten with a folk.  Pinchos or Pintxos are more from the North of Spain and are served on a toothpick, pintxo" in Basque language or "pincho" in Spanish means thorn or spike.  Montaditos more from the South of Spain are slices of bread with things on top and generally served cold, just to confuse things these can also be found with toothpick in them to stop toppings falling off the bread.  Basically they are all tapas ie small portions of food.

HERE ARE SOME OF THE MORE POPULAR TAPAS DISHES, BUT THERE ARE 100´s AVAILABLE.

Patatas bravas are served across Spain, though how they are served can vary depending on the region. Potatoes are cut and fried in oil before being served with either a spicy tomato-based sauce

Croquetas are fried balls of deliciousness that are served across bars and restaurants in Spain. They can come with a variety of meat, fish, and vegetable fillings with some of the most popular including ham and cod.

Montaditos  Small sandwiches that are often served toasted with a variety of meat, fish, and vegetarian fillings.

Ensaladilla Rusa  Potato salad mixed with tuna, mayonnaise, and vegetables like carrots and peas, may have its roots in Russia, but the dish is popular across eateries in Spain.

Pimientos de Padrón Small peppers that come from Galicia, in the northern part of Spain. They’re fried in oil and salted, and every so often a few of them will have an extremely spicy flavor.

Gazpacho A cold soup originally from the southern Spanish region of Andalusia. Vegetables like garlic, onions, peppers, and cucumbers will be chopped and mixed with oil and vinegar to create a refreshing soup that's especially great in the hot summer months. 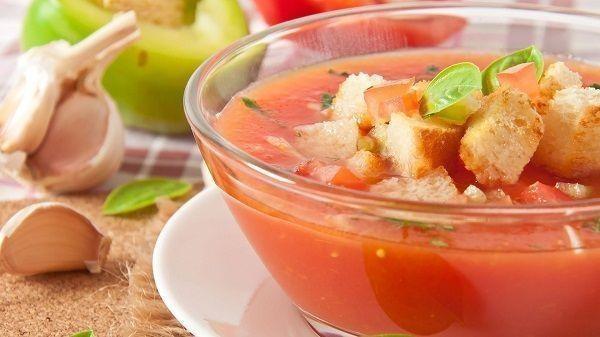 Gildas are a simple assembly of anchovy, olives, and chili peppers, The name means Lollypop  Make your own 3 1/2 oz marinated anchovies in olive oil, 10 oz guindilla chillies, cut into 3/4-inch pieces, 8 oz pitted green olives.  Curl up each anchovy and thread it onto a cocktail stick, along with two or three guindilla chillies and an olive. Stack the gilda onto a plate and serve immediately.

Gambas a la plancha are whole, unpeeled shrimps that are salted and cooked on a flat iron grill. The heads are left on for extra flavour.

Papas arrugadas are very small potatoes that are boiled in salt water, drained, and slightly roasted before being served with mojo, a sauce consisting of garlic, paprika, red pepper, olive oil, and sometimes cumin.

Chipirones are small squids that are usually fried or grilled whole to offer a healthy and delicious snack.

Albondigas Spanish meatballs that come with a wide range of dishes at tapas bars. Pick up the saucy meatballs — made with pork, beef, or a mixture of both — and pop them into your mouth with toothpicks for a succulent bite. 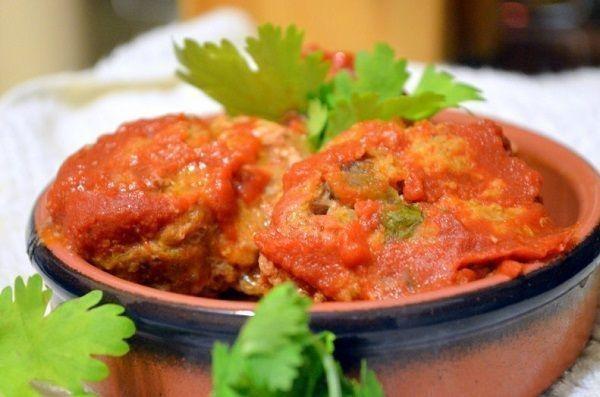 Zamburiñas  Galician scallops that are cooked in a tomato sauce and elaborated with olive oil. The scallops themselves are firm and take on the flavour of the tomato broth.

Morro Frito - If you like pork scratchings then you’ll like this dish. It is essentially pieces of fried pork snout covered with a liberal coating of salt and a very popular tapas in Spain to snack on whilst enjoying a drink. When it’s perfectly crunchy, it’s a delight to eat. 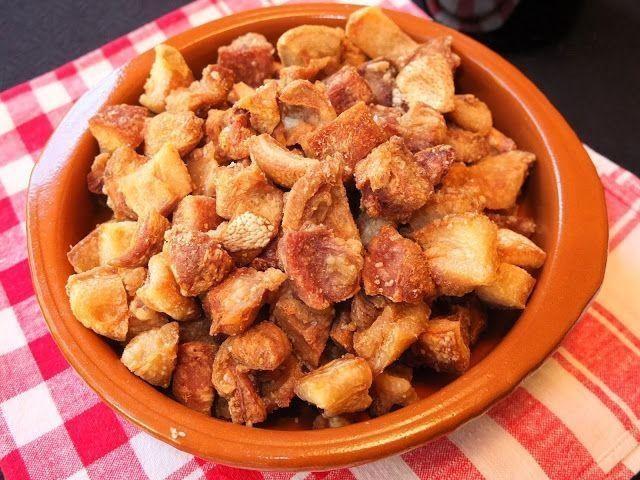 Queso con membrillo is a sweet and savoury tapa made using manchego cheese layered with a paste of quince, vanilla, lemon, and sugar.

Pulpo a la gallega consists of octopus cooked in boiling water, seasoned in paprika, and served hot in olive oil. Find out how to cook an octopus HERE 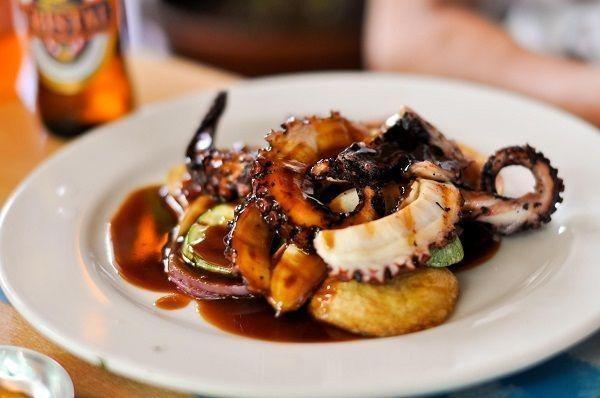 Calamares a la romana are battered and fried squid rings.

Ham  Jamon. And if it is Iberian, even better. This is one of the Spanish products most-liked by visitors and as a tapa is usually served with bread or picos and colines (small dish of crunchy bread typical in Spain).

Cheese In Spain there are many varieties and you will most typically be offered a local cheese. Some of the most well-known are Manchego (typical of Castilla – La Mancha), Idiazábal (Basque Country), Roncal (Navarre), Mahón (Balearic Isalnds) and Majorero (Canary Islands). More information on Spanish Cheese HERE

Tortilla de patatas, or tortilla española, is an omelette made with potatoes bound with egg and is usually flavoured with onions. As tapas, they are commonly served in small wedges. 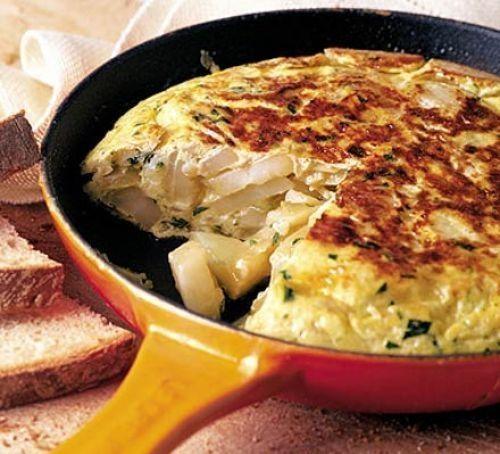 Arroz del Día rice of the day, with meat and/or seafood, served at lunchtime

Huevos rotos - Also known as huevos estrellados, these are fried eggs with a runny yolk served over a bed of ham and fried potatoes. The yolk is broken up and runs over the other ingredients. It is usually served with bread to dip into the egg yolk. There are other popular versions which substitute the ham for baby eels, prawns or other cured pork products.

Cuttlefish - Served grilled with mayonnaise or alioli sauce In many places, fried chopitos (similar to cuttlefish but smaller in size) are popular, which in Andalusia are known as puntilliutas.

Paella - The most popular dish in the Valencia region. Its main ingredient is rice and it is made with vegetables and, depending on the type, with meat or seafood. 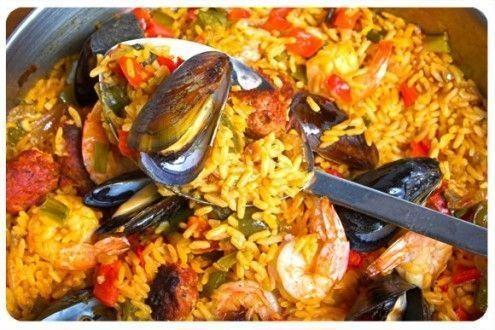 Pescaíto frito - Fresh breaded fish and fried in olive oil. This is found mostly in Andalusia where it is often served in a paper cone, prepared with a flavourful spice mix. There it is also known as bienmesabe.

And to drink?
The most popular drinks are beer and wine. Also common are cider, vermouth and sangria.Beer is often served in a caña (20 cl. glass) but can also be a doble (double the quantity), quinto or botellin (20 cl. bottle), or jarra (half litre). Lager is the most popular beer. As for wine, the most well-known is Rioja.

What are your favourite Tapas Dishes? comment below, we want to hear from YOU.