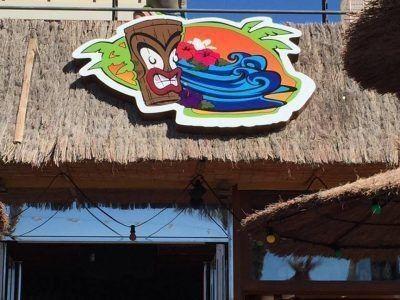 15th March - The venue has re-opened, looking very much the same, but at this moment according to management has not been given an official name. He quoted it would be known by the public as Tiki Beach.

9th March - The Venue is still closed and undergoing refurbishment.

Thank you for  the update.

THE END OF AN ERA

20th February -  "Tiki Beach" will reopen under a new name in about 2 weeks time.

A company (no names have been stated) have already requested a licence from the Town hall, updates as and when we receive them.

18th February 2019 - Tiki beach has today CLOSED its doors after years of battling court orders etc. The bar is being completely emptied and ripped apart.

Or is it being refurbished?  Rumours flying around today that it is being refurbished and will re-open in two weeks time.    We will update this post here when we know more confirmed details.

The Tiki Group, owners of Tiki Beach have reopened the judicial battle to avoid the closure of this controversial seafront bar, which was ordered to close by the Supreme Court last September, now the owners have filed an appeal with the Provincial Court of Alicante against the sentence handed down on December 10 by the Criminal Court No. 1 of Benidorm, which acquitted of the crime of false testimony.

If this remedy is successful and it is confirmed that there was false testimony, the Tiki will request the revision of the sentence of the Supreme Court, already firm and ordering the closure of the bar.

Source www.diarioinformacion.com  Story translated from Spanish so some information may have been lost in translation

The appeal, which according to the lawyers of the Tiki Beach would also have joined the Prosecutor's Office of Benidorm, puts in doubt the arguments of the magistrate of the Criminal Court about the declaration of said neighbor.  The judge concluded in his ruling that, although the accused did not count the facts in a reliable manner, he would not be guilty of a crime of false testimony since these statements were not related to the main purpose of the procedure ie the closure of the establishment due to excessive noise. Specifically, the neighbor was taken to the bench for the story he offered about an alleged altercation between the owners of Tiki Beach and the community of neighbors. The acquittal sentence recognized that his words could "affect the honor of the people to whom they refer,

However, the owners of the Tiki Beach maintain that the testimony of this neighbor of the Santa Margarita building, on whose ground floor the bar is located, along with other establishments, the Tiki Beach.

On June 22, 2015, the First Court Instance 1 of Benidorm issued the first closing statement against Tiki Beach, by building "a false account of proven facts, that the successive appellate rulings before the Provincial Court of Alicante and the Supreme Court have been limited to confirm, without attending to the merits of the presented resources".

Specifically, according to the statement, this witness allegedly attributed "collusion between agents of the Local Police of Benidorm and the wife of the owner of the pub, an investigating judge" to "benefit the Tiki Beach in front of the community of owners." In the opinion of the Tiki Group, this was the reason why the Court considered that "the various acoustic measurements made by the Local Police of Benidorm, which denied any excess noise from the Tiki Beach, should be rejected" and only attended to the presented by the neighborhood community.

The judge concludes that the Testimony of one of the residents of the Santa Margarita apartments, claimed to have been false testimony. was unrelated to ongoing events and the process that ordered the closure of the Tiki Beach and is therefore irrelevant - more updates to follow.

Update 22nd November -  One of the witnesses from the Santa Margarita apartments which is situated directly above the bar is being taken to court with regards to a false statement, prosecutors are asking for a jail sentence after they falsely accused a judge and her partner – who is the owner of the establishment of involvement in an undisclosed incident  in May 2014 which related to the Tiki Beach.

Update 20th November - Staff have suggested that it may close in around 17 days to reopen in a new location some time in February, but this has not been confirmed.

It has now hit the tabloids that Tiki beach is CLOSED....... Headlines read 'END OF AN ERA' Benidorm’s famous Tiki Beach bar closed forever after superfans fail to stop government-ordered shutdown over noise complaints" and a quote from said tabloid "POPULAR Benidorm watering hole Tiki Beach has finally closed its doors after being forced to shut up shop by the Spanish courts".  but as you can see from the photo below it was well and truly open today as usual.

19th November - Panic today as photos were posted all over social media stating that Tiki Beach was closed...... yes it was but only due to the bad weather.

Update 5th November - According to information from our members  The high court have said Tiki Beach must close but at this time they have NOT been given a specific closing date, this date can come at any time.

Tiki beach as stated below hope to continue at another beach front location, watch this space.

As the owners don't have any further legal options to pursue,  they are currently looking for an alternative spot on the resort's seafront that is not surrounded by as many residential properties, and they hope to reopen next year.

Claims today state that Benidorm bar Tiki Beach is set to survive – at a new location on the resort’s famous seafront strip.

The owners have not been told they cannot trade, it is simply that the Tiki Beach must close.

A source in the resort revealed: “They believe all they need to do is simply move along a bit, perhaps give the name a slight tweak, and they are back in business.”

Spain’s Supreme Court ordered the bar to close following a long-running dispute over the alleged "noise and disturbance".

The order to close was first given in April 2016 but the owners went to the Spanish Supreme Court to appeal, which they subsequently lost.

The place is now expected to stop trading in its current location in November.

Loud music and the behaviour of the customers, mostly British tourists, were cited by the community of owners of the Santa Margarita building in their call for action against the bar.

This article was issued in a UK paper and currently there is no official notification that there are any plans to open Tiki Beach in a new location but keep checking this article for updates.

The END of Benidorm? Brits vow to never go back after ‘favourite bar is forced to close'

Stating that "Some holidaymakers even vowed to never go back to the Spanish destination, saying there would be no point after Tiki has closed."

Tiki Beach will remain open until the company receives the official closure order.... which is expected to be in about one months time.

The Supreme Court forces the closure of the Tiki Beach after years of neighbourhood pressure.

Tiki Beach has been one of the most controversial cocktail/beach bars in Benidorm, located right on Levante Beach, but over the years it has been the subject of a string of complaints from neighbours in the Santa Margarita building in whose grounds the controversial pub is located. Residents have complained repeatedly over the years about the loud music and boozy tourists and the atmosphere the bar has created also the partying in the middle of the road making walking and vehicular access difficult at times.

Now more than a year and a half later, as back in April 2016, the Provincial Court again gave the reason to the owners when ratifying the closure. However, the owners of the controversial bar again appealed to the Supreme Court to avoid closure, these complaints from neighbours have now been upheld by judges after years of legal wrangling.

The Spanish Supreme court have now ruled in favour of the residents and ordered the closure of the pub in a decision that can’t be appealed.