There are over 150 different types of Spanish cheese, below you will find a description of the most popular.

Spanish cheeses can be divided into three main classes:

Fresco: fresh cheese which has not been cured or aged

Semi curado: semi-cured cheese which has been aged for two or three months

Curado: cured cheese that has been cured for upwards of 4 months

Spanish cheese-makers use three types of milk - Sheep, cows and goats.  Blends of these milks are also used to produce different cheeses. 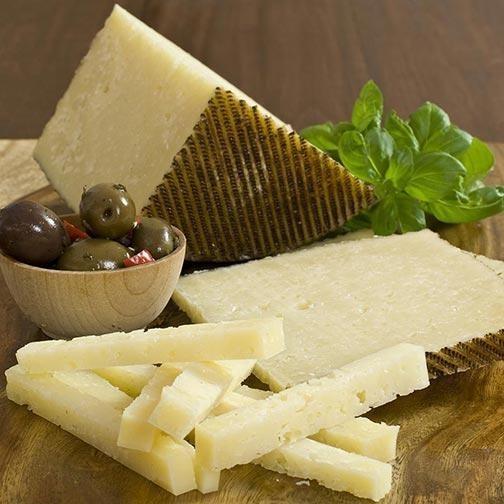 The Manchego is produced in the La Mancha region of Spain. It is made from unpasteurised sheep's milk. It is one of the popular cheeses from Spain.

The rind is inedible with a distinctive, traditional herringbone basket weave pattern, pressed on it. A typical ear wheat pattern is pressed onto the top and bottom wheels of the cheese. There are specific differences in Manchego cheeses, depending on their aging period.

Semi Curado - Young Manchego cheese is aged around 3 months are supple and moist. The flavour is fruity, grass, hay with a tangy note. 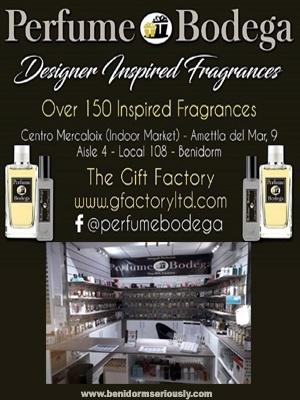 Curado - Manchego cheese aged for 6 months acquires a caramel and nutty flavour. It has distinct acidity.

Viejo - Manchego cheese aged for a year becomes crumbly in texture while the interior of the cheese acquires a butterscotch colour. It has a sweet, lingering taste. 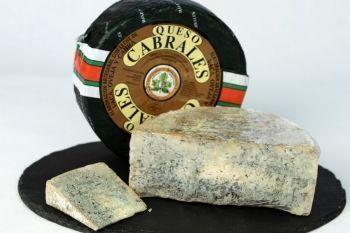 The cheese is a mixture of raw cows, goats and sheep's milk aged for between two and four months in natural formed limestone caves. Chilly and humid conditions in the caves facilitate the growth of bluish-green penicillium mould on this highly prized cheese. Unlike other blue cheeses injected with penicillium, Cabrales cures from the outside of the cheese to the inward.

A finished Cabrales can be characterized by its strong, penetrating aroma and sharp, acidic, slightly salty taste. It pairs well with red wine, fresh figs, salami, sweet sherry and dry sausages. The cheese is treasured as a base for sauces, for melting over grilled or roasted meats and goes well along with baguette slices, crackers, or fruit.

Regulation requires the cheese be sold in a dark-green-coloured aluminum foil with the stamp of the PDO Queso de Cabrales. 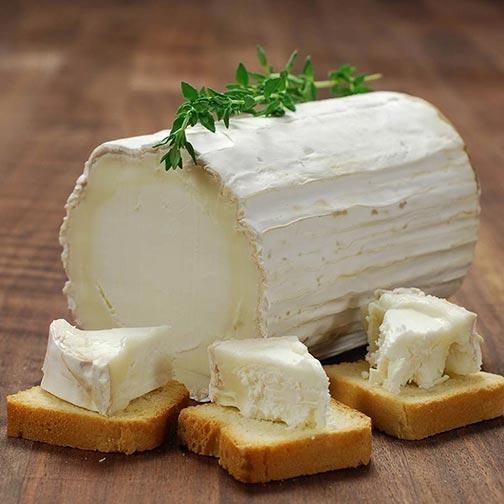 This is a soft log-shaped goat’s milk cheese, made from pasteurized goat's milk , it´s creamy and dense, young caña is mild and creamy, savoury, salty and with a citrusy taste,  as it ages, the cheese gets a sharper more intense flavour. The thick, broad log has a dry bloomy rind. The Murcia region is famous for this cheese.

This is the perfect cheese for any Spanish cheese board and can often be found served at tapas bars all over Spain, just sliced onto thick fresh crusty bread. its also perfect for salads and can often be fried coated in breadcrumbs and coated in honey and sesame seeds or served with a spicy tomato sauce. 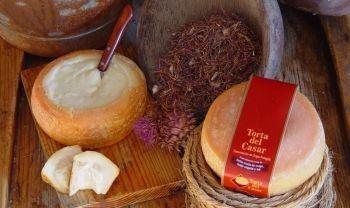 Torta del Casar Spanish cheese made from raw sheep’s milk in the Extremadura region, near the Portuguese border. Named after Casar de Cáceres, its city of origin, the shepherds who made the cheese used to call it ‘atortao’ because it was shaped like a cake or ‘torta’.

Torta del Casar is a vegetarian produce coagulated with cardoon, a wild thistle which adds a slightly bitter note to the rich and slightly salty tasting cheese. The cheese is aged for at least 60 days upon which it develops a semi-hard, yellow to ochre crust and a soft, spreadable, creamy, almost runnier paste. Its insides are yellowish in colour and the aroma very unique. Torta del Casar should be enjoyed as an appetizer or a dessert, spread on bread with a glass of dry, red wine.

Rather than slicing it into triangles as is typical with most Spanish cheeses, you cut the top rind off of the entire small wheel creating what look like a pot of cheese. Dive your knife in and spread the deliciousness on bread or just dive in with a spoon!

Zamorano is a famous Spanish sheep’s milk cheese made in the region of Castile-Leon, Zamora. This hard cheese takes almost 6 months to mature fully. It has a pale-yellow colour with crumbly texture and contains 45% fat.

Zamorano has  buttery and nutty taste, which is served as a table cheese with White, Red as well as Zinfandel wine. It gets characteristic flavour because of the breed of sheep – the small, scruffy Churra and the Castilian sheep.

Due to a distinctive zigzag pattern and cylindrical shape, Zamorano appears similar to Castellano or Manchego. 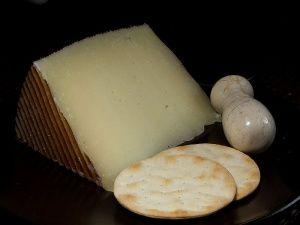 Castigliano (also known as Castellano) is a traditional, creamery, hard cheese made of milk from Churra and Castellana's breeds of sheep. It is either round or half cylinder shape with rind that is engraved with the mark left by the wooden mould. The grayish-dark brown colour of the rind conceals a yellow coloured pate. This cheese comes from the Spanish region of Castile-Leon, which accounts for 85% production of pure sheep's milk cheese. Castigliano best represents the cheese-producing region.

The ripening process of Castigliano lasts at least two months to develop a medium mature and mature age cheese. It comes in pieces ranging between a kilo and 3.5kg. The cheese is similar to Manchego but comparatively it is quite moist, and has a few rice-sized holes. Cheeses made with raw milk such as Castigliano have a spicy, cream-caramel, buttery flavour that is perfectly offset by the fresh acidity and hint of salt. 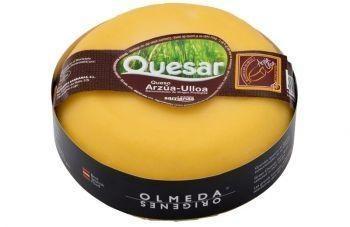 This is a cow's milk cheese made in the Spanish  region of Galicia.

It is a soft cheese, made from raw or pasteurized milk, has a minimum maturity period of six days, and has a lenticular shape, or cylindrical with rounded edges. Its rind is thin and pliant, medium to dark yellow, bright, clean and smooth. The cheese itself is uniform in color between white and pale yellow. It is soft and creamy without cracks but may have a few small holes or bubbles. The flavour is slightly sweet and grassy. 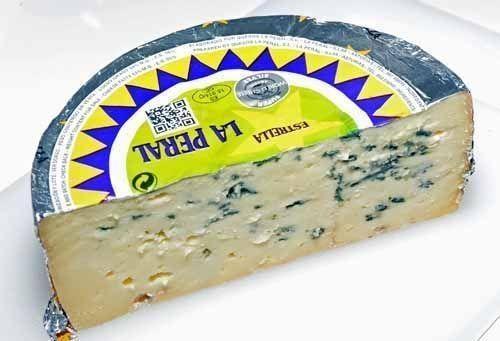 La Peral is a pasteurized blue cheese made in a Asturias in northern Spain. It is a very modern cheese by Spanish standards (in the 1920s) and is named after a local village.

A small amount of sheep's cream is added to a blend of cow's milk and then inoculated with Penicilium mould to give the cheese its characteristic blue veins. The cheese is then matured for a minimum of two months and up to five months before being sold. When young, La Peral is firm, moist with a somewhat granular texture. With age, the paste becomes soft and slightly weepy as it loses its moisture. Flavours are very delicate in its initial days of ripening but as the days advance it acquires a full, slightly spicy flavour. 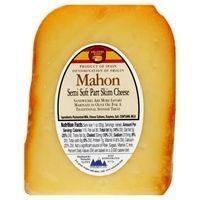 Mahon, named after the port of Mahon on the Minorca island, Spain, is a cow's milk cheese, produced by various dairies. Mahon is soft to hard cheese with buttery, sharp, salty in taste. During maturation the cheese is hand rubbed with butter / paprika or oil. Mahon is sold at different ages ranging from 2 months to 10 months.
Artesano Mahon / Artisanal Mahon, made using raw milk is aged for 2 to 3 months that is superior in flavour than the aged version. The texture is close, dense with occasional hole throughout the paste which is ivory in colour.
Mahon Reserva / Aged Mahon is harder and drier in texture, more salty in taste.
Industrial version of Mahon is made using pasteurized milk what has milder flavour.

A traditional way of eating Mahon is by sprinkling it with black pepper, tarragon and olive oil. 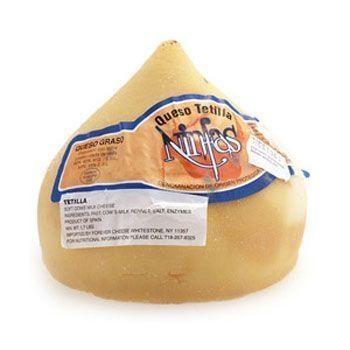 Tetilla is a typical Galician cheese made from the herd of Friesians, Alpine Browns and Rubia Gallega cows. Since 1992. The name Tetilla is Galician for “small breast”, which describes the shape of the cheese – a pear shaped cone topped by a nipple.

This cheese has a pale yellow, thin, natural rind or sometimes no rind can be seen at all. Its texture is soft, thick and smooth with scatterings of air pockets. Yellowish ivory in colour Tetilla has a creamy mouth feel with buttery, slightly bitter and tangy flavours surrounding the palate. The maturing, which takes place between 10 and 30 days, happens in the hot and humid climate of Galicia. 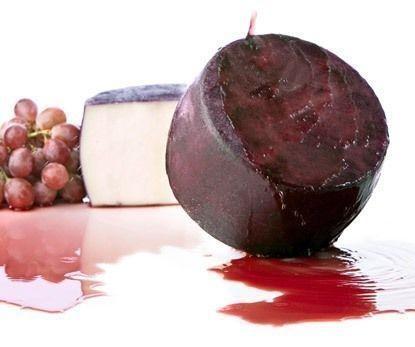 Queso de Murcia or Murcian Wine Cheese is a pasteurised goat's milk cheese from the Murcia region of Spain. It is a pressed, washed, uncooked cheese aged for a minimum of 45 days in case of wheels over 500 grams or 30 days for others.

The pate is semi-soft with small eyes, ivory white, slightly acidic and creamy to taste. On the outside, the rind appears purple, characteristic of red wine baths during maturation. As with other Spanish cheeses, Queso de Murcia is eaten with beer or wine or as a part of meal with fruits & nuts.

All About Spanish Chorizo