Benidorm approves the request to reforms of the law so that the trile (Peamen) are considered a crime.

This is fantastic long awaited news.

Story reported in Spanish by www.diarioinformacion.com.  Some detail may be slightly lost in translation, read the original story HERE

Keep up to date with all Local News Stories HERE

The plenary session of the City Council today approved, unanimously and urgently, a motion urging the General Courts to reform the law so that the practice of "illegal activities", such as 'the trile', "do not enjoy the impunity with which current legislation treats them "

The purpose of this motion, agreed last Friday at a Board of Spokespersons convened by the mayor, Toni Pérez ( PP ), is that 'the trile' be criminalized in the Criminal Code in order to provide the Security Forces with " agile procedures "and" effective legal measures "to" eradicate "this" fraudulent activity "of the streets, according to municipal sources.

An activity that, the same sources have agreed, " damages the image of the city of Benidorm and tourism in general ."

The proposal approved today advocates "to undertake the necessary legislative reforms so that the practice of activities such as the game of 'the trile' and other frauds of this nature" are adequately addressed.

"It is an illegal conduct in itself, as it is an improper game that does not conform to the corresponding regulations and its activity is not classified in the Criminal Code," he says.

Therefore, the proposal points out, "it is essential and urgent that a typification of this activity to indicate a higher level legal figure", through which to articulate "effective measures" against 'the trile' that " this is to ensure that both residents and tourists, can feel more security during their stay in Benidorm. "

According to the motion, since the early seventies, 'the trile' "has been affecting and damaging the image and the safety of  Benidorm without the effective formula to eradicate the activity being found to date", despite the fact that "All the governments of the city have tried to orchestrate strategies to eliminate the painful image of the 'trileros' acting on public roads." (story HERE) 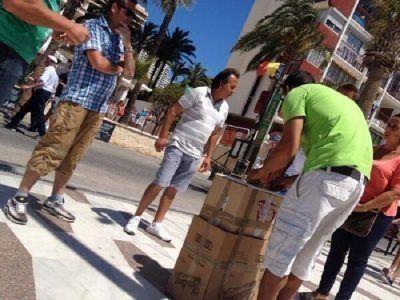 For this, among other actions, campaigns have been launched in the last three decades and warnings have been published about this game, informative talks have been held with tour operators and clients, and efforts have been made to harass the promoters through police presence and intervention. of the fake game.

However, "it has not been enough to tackle a problem," sanctioned in the Game Law of the Valencian Community and in the Municipal Ordinance number 2, the motion indicates.

More recently, he recalls, "from the Department of Citizen Security, the Headquarters of the Local Police and the Police Station of the National Police Force" new legal figures have been sought to address the problem. "

Thus, it has tried to link the repetition of the practice of 'the trile' to a crime for disobedience to an agent of the authority and to obtain restraining orders .

"Although the first initiative has been dismissed in higher instances, in terms of restraining orders, there is currently a final sentence, for the crime of theft, towards a group of members of 'the trile'," says the motion.

The municipal plenary session in which this motion has been unanimously approved has taken place after the recent dissemination of a video through social networks about an event that happened a few days ago in Benidorm in which a young Briton received a beating at the hands of a group of trileros for warning other tourists that they were being scammed . The victim of the aggression suffered several injuries, one of them in the head.