FIND INFORMATION ON OTHER FIESTAS HELD IN BENIDORM HERE

This fiesta goes back to Pagan times and comes from the Latin word Facla which means Torch.  This is one of the biggest most popular and unique of all the fiestas held through out the year, it is colourful and very very noisy with lots of firecrackers from the early hours until late at night. This fiesta always end on 19th March which is another very important day here in Spain, Fathers Day.

Today the Pagan side of it is forgotten and San José (Saint Joseph), the patron saint of carpenters, is the official focus for the festival. Carpenters used to hang up planks of wood called ‘parots’ in the winter to support their candles when they were working. At the beginning of spring these pieces of wood would be burned as a way of celebrating the end of dark, winter working days. After a while they began to put clothing on the ‘parot’ and then started to try to make it identifiable with a well-known local personality giving the people the opportunity to publicly mock and/or criticise unpopular events or people. These are what are today called the  ‘ninots’, the enormous cardboard, wooden, polyurethane, Styrofoam, cork, plaster and papier maché figures of today. The authorities later decided to link the burning of the ‘parots’ with Saint Joseph’s Day to try to stop it getting out of control!.  So basically this fiesta marks the beginning of SPRING and fresh beginnings. 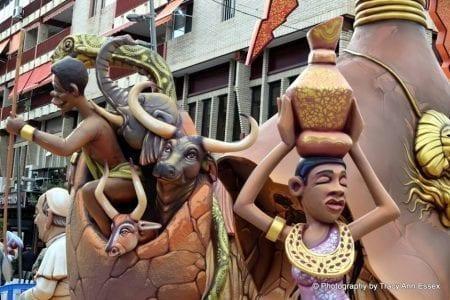 Each district and in Benidorm there are three, Es Tolls, Benidorm Centro and the Rincon de Loix will spend the entire preceding year constructing these elaborate giant Ninots. 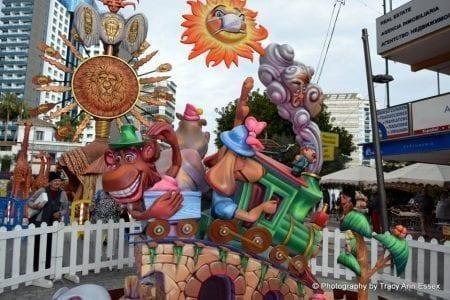 These Ninots are displayed for 4 days to give people time to inspect and admire them, they are placed in each of the 3 districts one can be found at the end of Levante beach, near Burger King, the 2nd  in the Old Town in the Plaza Triangular in front of Mc Donalds, the 3rd again in the Old Town on Calle Tomas Ortuno.

These are burnt (the Crema) in that order from midnight on the 19th starting around midnight then every 30 minutes. 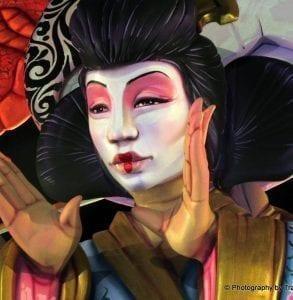 And please don’t think you can rest up during the day to prepare yourself for the evening’s bombardments. After you’ve been unceremoniously startled awake at 8 o’clock.

Falla - Although this fiesta is called THE Fallas, the falla is the name of the effigy/statue.

Plantà - This is the name given to the act of assembling and placing of the statues.

Ninot - This is the name given to the figures

Cridà -  This is a call made by the authorities and the falleros / to the citizens and visitors, encouraging them go out to celebrate.

Mascletà - Not to be confused with normal fireworks, the mascletà is one of the most important acts of Fallas. The word comes from masclets, which are a type of firecrackers the sound can reach over 130 decibels. However loud you think this is going to be you’ll be wrong. There is no way of beginning to describe the amount of noise generated. Pregnant women are forbidden from attending, keep your mouth open to allow the sound to escape and not echo around your head – so they say – but be prepared to feel the ground shake beneath your feet.

Despertà -  The falleros (men) and falleras  (women) walk through the streets of the town at 8 in the morning, accompanied by a band, while throwing firecrackers and wake up the neighbours so that they take to the streets for the celebrations.

Ofrena: This is the flower offering  where the falleros and citizens dressed in typical traditional costumes will give gifts to their patron saint.

Nit del Foc -  Thisis the night in which the longest fireworks display of all the Fallas will be held, it  always takes place in the evening/night before San José (Saint Joseph’s day)

Cremà - The main event of the Fallas, this is held late at night/early hours of the morning of the 19th, this is when the beautiful monuments are burned.

12:15 Entrance of the music band "L'Illa de Benidorm", through the streets of the Falla neighbourhood "Rincón de Loix". Next, parades from the Falla "Rincón de Loix" to the Falla "Benidorm Centro", from where both will depart (around 12:30 p.m.), in a parade, to visit the Falla "El Tolls".

12:00 - Parade of the Falla "Els Tolls" through their neighbourhood, while waiting for the visit of the Fallas "Benidorm Centro" and "Rincón de Loix".

17:30 Parade of the Falla "Rincón de Loix" through their neighbourhood, while waiting for the visit of the Fallas "Benidorm Centro" and "Els Tolls".

08:00 - DESPERTÀ, (firecrackers) in charge of the Falla “Els Tolls, through the neighbouring streets.

12:00 - Parade of the Falla "Rincón de Loix" and the Falla "Els Tolls", through their respective neighbourhoods.

12:30 - Parade of the Falla "Benidorm Centro" through his neighbourhood.

18:00 - OFFERING OF FLOWERS to the Virgen del Sufragio and San Jaime, organized by the Central Fallera Board, in charge of the different Fallas, which will be concentrated in the Elche Park (near the port). ITINERARY: Elche Park, Paseo de la Carretera, Alameda del Alcalde D. Pedro Zaragoza, C/ Mayor and Plaza de San Jaime. At the end of the offering, a FIREWORKS CASTLE will be shot.

08:00  -  DESPERTÀ WAKE UP in charge of the Falla "Rincón de Loix", through the streets of his neighbourhood

11:00 - Els Tolls fault. Mass in honor of Saint Joseph in the Church of the Good Shepherd.

12:00 - Falla Rincón de Loix Mass in honor of Saint Joseph in the Church of Our Lady of the Sea.

13:00 - Failure "Benidorm Center". Mass in honor of San José in the Church of San Jaime and Santa Ana.

The Benidorm Falls fireworks on Saturday are postponed due to rain forecast.  The Local Board Fallera, the three Failures and the City Council adopt the decision and will announce the new date shortly

Together with the Fallera Local Board, the joints of the Fallas Els Tolls, Corner of Loix and Benidorm Center, and the Benidorm Town Hall, have agreed to postpone the fireworks shows  due to the forecast ion of adverse weather phenomena.

A new date will be revealed shortly. The rest of the acts experience no change.

23:00 - All children's monuments (All three locations of the fallas have a children’s falla).

Please note all of the above is translated from Spanish. - IMPORTANT: The Tourist Information Office and Benidorm Seriously are not responsible for any changes that may occur in the schedule.

FIND INFORMATION ON OTHER FIESTAS HELD IN BENIDORM HERE