Obviously here in Spain we still get all the normal insects such as Bees, wasps, ants, flies, centipedes and spiders  etc these are more annoying than dangerous unless you have an allergy to them.

FOR INFORMATION ON DANGEROUS INSECTS AND REPTILES IN SPAIN -  CLICK HERE

The mention of cockroaches can often make your skin crawl and your hairs stand on edge, unfortunately they are part and parcel of living in a hot country.

Cockroaches have been around for millions of years, evolving into some of the most adaptable pests on Earth. There are approximately 4,000 living species of cockroaches in the world.

Cockroaches are commonly found in buildings and homes because they prefer warm environments close to food and water, it does not mean a place is dirty, even the cleanest of places can play host to these common pests. 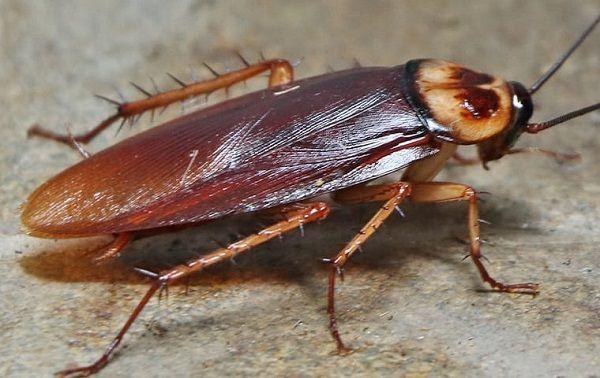 Cockroaches aren’t fussy eaters at all, they will eat nearly anything, fruit, glue, faeces, you name it! They will even eat each other if food is scarce.

Evidence suggests that Cockroaches have been around since the time of dinosaurs!  fossil evidence shows that cockroaches have existed for over 300 million years!

The average lifespan of a cockroach is approximately one year.

Cockroaches can squeeze through the tiniest of gaps!

Just like rats and mice, cockroaches can squeeze through the smallest of cracks!  This is all down to their  exoskeletons. Cockroaches are able to fit through a gap as small as a quarter of their body height by flattening their flexible exoskeletons and splaying their legs to the sides.

Although not dangerous as such, i.e they don´t bite or sting studies have shown that cockroaches have been linked to triggering asthma as well as other allergies! the saliva, faeces, and shed body parts of cockroaches can trigger asthma when they are kicked up in the air.

Cockroaches can survive a week without a head

Cockroaches can live for approximately one week without a head! The reason behind this is, that unlike us, cockroaches don’t need their mouths to breathe. Instead, they use spiracles (tiny hole) in their body to inhale and transport oxygen. Combine this with the ability to survive without food for a month and you have an insect that can last without it’s head for a week!

Some female cockroaches only mate once and stay pregnant for life!

Cockroaches are insanely quick. Being the prey of many predators, it’s they only defence mechanism. They can run up to speeds of 1.5 meters per second, the human equivalent is around 200 miles per hour!

Even though many species of cockroaches have wings, they can’t fly, well not very well,  their wings only allow them to glide and flutter for short distances. It is much quicker for a cockroach to scurry around the place than it is for them to try and fly.

Cockroaches can hold their breath for 40 minutes

Studies have shown that cockroaches can hold their breath for 40 minutes, and can survive underwater for 30 minutes!

Studies have shown that cockroaches are quite fond of a nice cold pint of beer, they are attracted to the sugars and hops found in beer.

Fortunately, the theory of cockroaches being able to survive a nuclear explosion is just a myth. Well, to some extent.

The myth first appeared after the events in Hiroshima and Nagasaki in 1945 where cockroaches were the only survivors. After various testing it was found that cockroaches can’t actually survive a nuclear explosion as no crawling insects survived radiation levels of 100,000 rads, but they can endure far greater levels of radiation than humans.

Cicadas are oval-shaped, winged insects that provide a buzzing and clicking song heard in nature throughout the summer.

Their wings are transparent and can seem rainbow-hued when held up to a light source.

The buzzing sound they make is a mating call. Male cicadas vibrate a white, drum like membrane on their abdomens called a tymbal. A group of singing cicadas is called a chorus. The singing attracts both males and females to a certain area. The males join in on the singing and the females mate with the males.

Some cicada calls can be heard up to 1 mile (1.5 kilometer) away.

Cicadas do not sting or bite. .

Each species of cicada has a different song.

Completely harmless to humans but deadly to the local palm trees.  The red palm weevil is a member of Coleoptera: Curculionidae. The male and female adults are large reddish brown beetles about 3 cm long and with a characteristic long curved rostrum; with strong wings, they are capable of undertaking long flights.

Damage to palms is done mainly by the larvae. Adult females lay about 200 eggs at the base of young leaves or in wounds to the leaves and trunks; the grubs feed on the soft fibres and terminal bud tissues.  Spanish authorities work continually to try and eradicate these beetles.

All the above can be found here in Spain and are completely harness to humans, you will hear them in the summer months as the males make very loud noises both during the day (grasshoppers) and night time (crickets),  the noise is made by  them rubbing a row of pegs on the hind legs against the edges of the forewings (stridulation). These sounds are produced mainly by males to attract females, though in some species the females also stridulate. In terms of size, a grasshopper is larger than a cricket, the grasshopper comes in colours of: neutral, green, grey, or light brown. On the other hand, crickets come in bright or dark colours 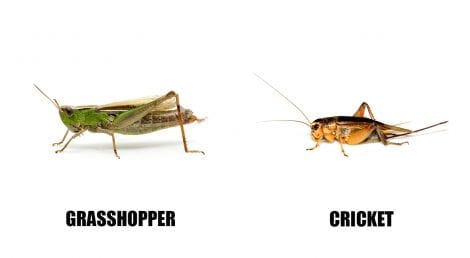 While grasshoppers can fly and jump, crickets just only jump. Only some cricket species fly. 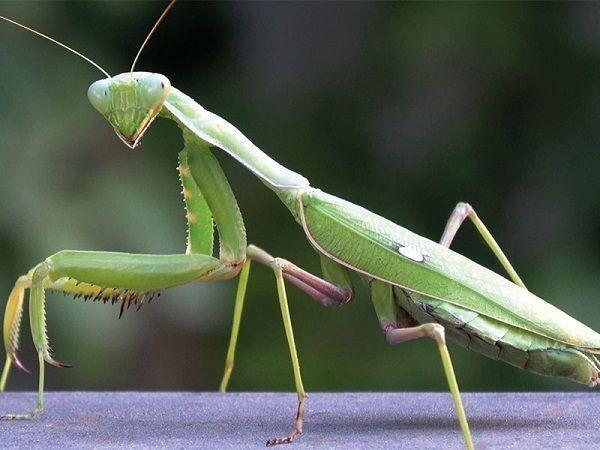 They do not bite humans, or spread disease. However, when handled, their spiny-like forelegs can be readily felt as a "sharp pinch." they can vary in colour from bright green to brown, During the summer seasons praying mantis grow in size, gain dimension, and during autumn begin their breeding season Mantids are most commonly seen in late September, October and early November depending upon weather conditions, and yes the females do eat the males after mating, these are fascinating insects to watch. HARMLESS Snakes - Don´s panic you will not see any of these in Benidorm town centre.

Pretty much all the snakes are protected by law in Spain, so don't even think about harming one. 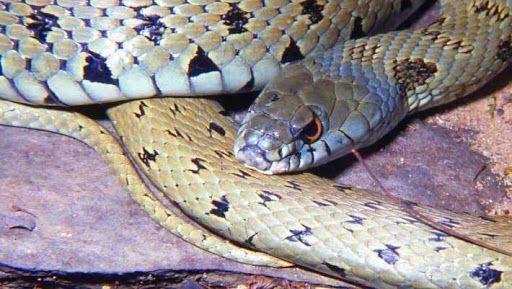 The Grass Snake is typically dark green or brown in colour with a characteristic yellow collar behind the head, which explains the alternative name ringed snake. The colour may also range from grey to black 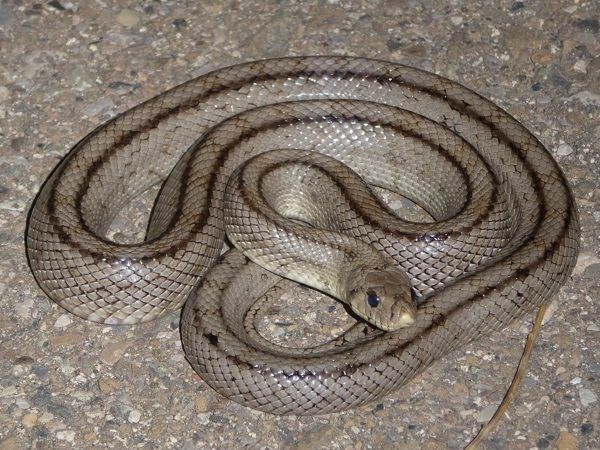 It is found in France, Portugal, Spain. Its natural habitats are forests, shrub-land, Mediterranean-type shrubby vegetation, arable land, pastureland, plantations, and rural gardens.  It usually eats eggs, insects, and small mammals such as mice, also known as the ratsnake. 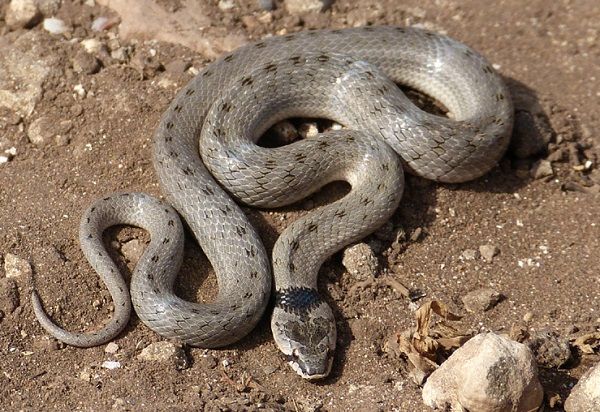 This snake is not aggressive and is mainly found in Catalonia. But it is advised to stay away if you do spot on. False smooth snakes are totally harmless for us humans. They are venomous, yes, but their venom is only effective against tiny lizards and other small animals.

Spain has around 16 species of Lizard,  Here are some you may see. Two very common geckos that frequent rock walls and houses are the Moorish gecko and he Turkish gecko which is slightly smaller than the Moorish Gecko and found more in coastal regions. These are great insect hunters  and are a familiar summer sight and are quite entertaining to watch.

The largest of the lizards is the ocellated lizard. This blue-spotted green reptile grows to 20 inches or longer.

The Large Psammodromus ( Psammodromus algirus ) This is probably the most common lizard in Spain, they prefer shrubby habitats, Mediterranean forests and hedges. Snout to vent length is up to 8 cm, but the tail is twice or even thrice times that length. 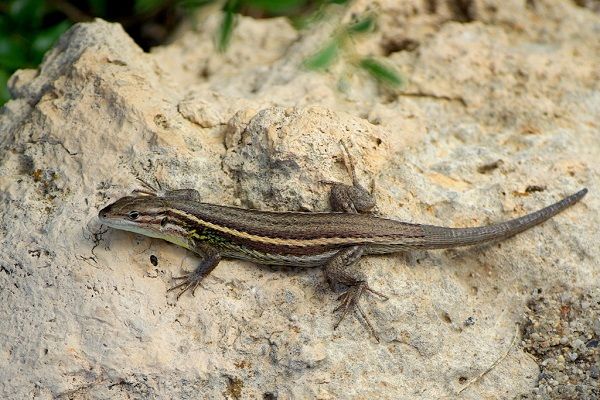 This is a medium sized lizard (approximately 20 cm head-tail length). they have strong bodies and long tails (almost two thirds of the total length), it`s snout is short and blunt. They look as though they have eyebrows. Their body is covered by smooth and very thin scales, shaped like small seeds.

These are daytime reptiles and are active during the warm months of the year. In coastal areas they can be active almost all year round, they prefer areas of loose and cleared soils (coastal or dolomitic sand), without disregarding some low scrub cover. It avoids agricultural land, but it is present in mountain areas at high altitude.