Earthquakes in the Valencia region (this includes Benidorm)

Earthquakes (Un Terremoto in Spanish) in the Valencia region - Earth tremors are not that unusual in our area, and most are minor and nothing to worry about and are just part of the natural way energy is released, caused by the fact that beneath the Mediterranean there are vast tectonic plates which are in constant motion.  This coastline was once attached to Africa and there are a series of fault lines right along the Murcia, Almeria and Alicante coastline.

The south of Alicante is an area of strong tectonic activity and the last tremor of medium intensity occurred on March 24th, 2019 off the coast of Cape Palos (Murcia), where the IGN recorded a 4.3 on the seismic scale of Richter.

The southeast of the peninsula is the region with the highest seismic risk.

What is an Earthquake?

An earthquake is an intense shaking of Earth’s surface. The shaking is caused by movements in Earth’s outermost layer.

Why Do Earthquakes Happen?

Although the Earth looks very solid from the surface, it’s actually very active just below the surface. The Earth is made of four basic layers: a solid crust, a hot, nearly solid mantle, a liquid outer core and a solid inner core.

The solid crust and top, stiff layer of the mantle make up a region called the lithosphere. The lithosphere isn’t a continuous piece that wraps around the whole Earth like an eggshell. It’s actually made up of giant puzzle pieces called tectonic plates. Tectonic plates are constantly shifting as they drift around on the viscous, or slowly flowing, mantle layer below.

This non-stop movement causes stress on Earth’s crust. When the stresses get too large, it leads to cracks called faults. When tectonic plates move, it also causes movements at the faults. An earthquake is the sudden movement of Earth’s crust at a fault line.

How are Earthquakes measured?

Scientists can determine the time, location and intensity of an earthquake from the information recorded by a seismometer. This record also provides information about the rocks the seismic waves travelled through.

Are there volcanoes of the Valencian Community? Yes we have 2, both classed as dormant

The most spectacular of those we have in the Valencian territory is perhaps the Cofrentes Volcano,located in the Cerro de Agrás,500 meters high. This volcano was the subject of research in the mid-seventies, due to the upcoming construction of the Cofrentes Nuclear Power Plant. Studies show that the crater experienced its last activity about 2 million years ago. However, in its depths there is still some activity, which some nearby spas take advantage of, through its thermal waters. 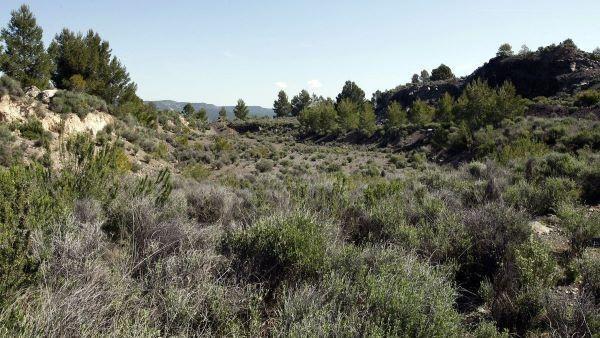 Crater of the Cofrentes volcano.

The other volcano in our territory, and the youngest, is located in the Columbretes Islands (Castellón). These islands are known to be of volcanic origin. Several studies suggest that this area had volcanic activity only 300,000 years ago. Specifically in one of the Islands that form this small archipelago off the coast of Castellón, in the so-called Illa Grossa.

For a volcano to be considered active it must have undergone an eruption in the last 10,000 years

During the 19th century several earthquakes in the Valencia region caused serious damage and casualties. The most notable was the Torrevieja earthquake on March 21st in 1829, which completely destroyed the town and caused serious damage in Guardamar, Almoradí and Orihuela with hundreds of fatalities.  This earthquake, reached a magnitude of 6.6 (measured on the scale used at the time) and resulted in 389 dead and 377 wounded.

February 2021 - The national earthquake institute has just finished fitting the latest generation detectors in Guardamar del Segura and Elche, which work in real time, and will enable scientists to measure any increase in activity quicker.

Recent earthquakes in the Valencia Region

22nd September - An earthquake occurred in Guardamar del Segura at 08.15 this morning, registering 2.6 on the Richter scale, the epicentre was recorded just southwest of Guardamar.  No damage has been reported. 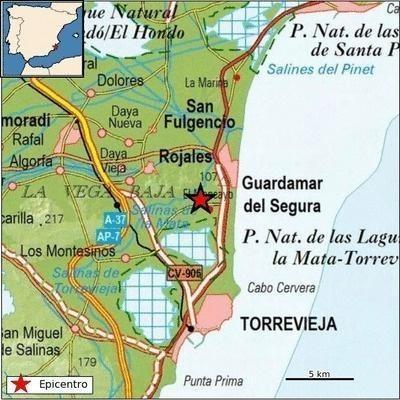 29th August - The province of Alicante has registered three earthquakes, in less than 24 hours. All three were in the areas of l'Alcoià and el Alto Vinalopó, in the interior of our province. The three quakes came relatively close to each other, in time and also situation...With the first the strongest at 3.0 on the Richter scale, which is the strongest of the year, not just in our province, but also our region.

20th July - A small earthquake was registered yesterday at 10.17, with the epicentre just off the coast of Alicante, 20km from the coast. The quake of registered 1.8 on the Richter scale, at a depth of 1 km.

22nd June - Wednesday afternoon at 14.21 saw an earthquake of 2.1 on the Richter scale registered in the area of Gata de Gorgos, in an area north of Benidorm and inland of Javea.  The epicentre  was registered 30 kilometres deep, very close to the urban area and near Carrer Sant Josep.

This is the third earthquake that has occured this year in the region of Marina Alta, after the two registered on March 8 in El Verger and Els Poblets. 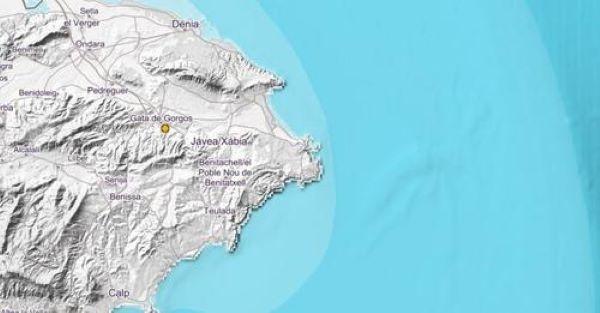 14th March - Santa Pola Area, recorded at 05:06  and registered 1.8 on the Richter scale and was located 19 kilometres from the coast off Cape Santa Pola, northeast of the island of Tabarca.

8th/9th March Two earth tremors with 13 minutes between them were registered in the early hours of Tuesday night/Wednesday morning in the area of the Marina Alta, They had their epicentres in El Verger and in Els Poblets. 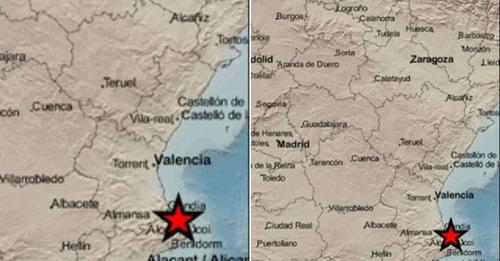 The first measured 1.7 degrees magnitude on the Richter scale, occurred at 01:58 in the municipality of El Verger, 10 kilometres deep.

The second earthquake, of 1.8 degrees of magnitude, was registered at 02:11 in the municipality of Els Poblets, also 10 kilometres deep.

24th January 2022 - Santa Pola area, (just south of Alicante city). The quake measured 1.8 on the Richter scale had its epicentre between the island of Tabarca and the mainland at Santa Pola and was recorded at 14.22, 7km deep. 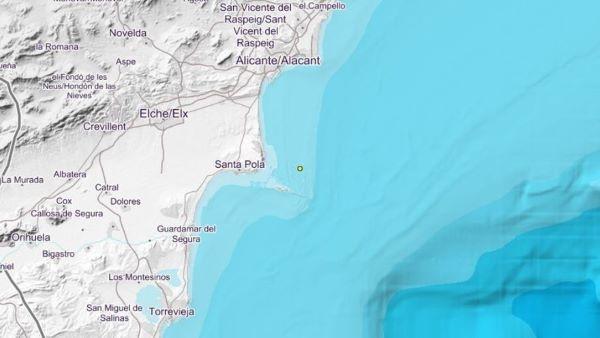 This is the seventh earthquake registered this January, in the province of Alicante, counting those registered in Salinas (Alto Vinalopó), Crevillent (Baix Vinalopó) and Planes (El Comtat) and the two of Tibi (L ́Alcoià) and two of Santa Pola.

4th December - Many residents were woken early this morning by an earthquake, which occurred at 02.36.  The epicentre was to the south of Torrevieja port and it measured 2.2 on the magnitude scale.  The tremor occurred at a depth of just 3km, which meant that it was felt more strongly by residents in their homes.

A second smaller tremor occurred later in the morning, which is yet to be confirmed by the national geographic institute (IGN).

13th October - Fortuna (Murcia Region 127km from Benidorm) registered during the early hours of Tuesday a tremor of 3.4 on the Richter Scale at 04.50.  The depth of the earthquake was 2 km and could be felt in neighbouring towns such as Santomera. The tremor did not cause personal or material damage, according to the emergency services of the Region.

26th September - The municipality of Sella, Marina Baixa, registered this morning at 09.30 seismic movement measuring 2.1 on the Richter scale.  The epicentre was located in a mountainous area of pine forest and near the CV-770. 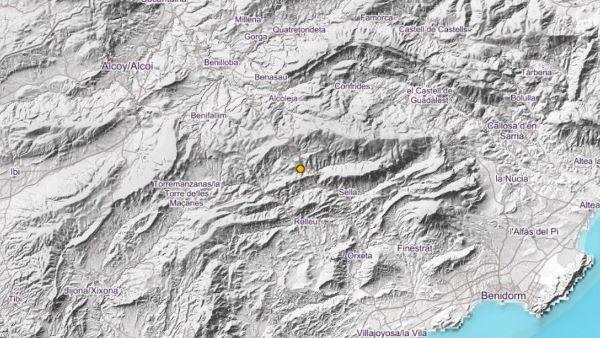 31st Aug - Four earthquakes were registered in the space of a few hours, just off the coast of Alicante early yesterday.

Experts say the quakes could be connected to a wave of them that are being experienced further south in the area of the "Mar de Alborán", where 72 quakes have been measured in the past 24 hours.

17th August - Recorded in the northern area of the Salinas de Torrevieja, between the municipalities of Los Montesinos and Torrevieja at 00:42, measuring 1.8 on the Richter scale, with the epicenter located at a depth of 5,000 meters.

8th August -  NE of Petre (this is the 3rd this month in this area) Sunday afternoon at 16.21 and was recorded measuring 2.8 on the Richter scale with the epicentre at 3,000 meters deep

August 15th 2021 will be the 18th anniversary of the last earthquake that produced victims in the province of Alicante. That earthquake also occurred in Petrer at 8:51 a.m. on August 15, 2003 and with a magnitude of 5.8 on the Richter scale, which caused two fatalities due to a landslide in the Mountainous Area of El Cid.

5th August -  Santa Pola, measuring 2.5 on the Richter scale. The epicenter of the earthquake was located in the coastal waters off Santa Pola and 11,000 meters deep at 14:12 hours on Thursday.

20th July - Elche records an earthquake measuring 2.2 on the Richter scale at 12.13 and at a depth of about 7 kilometres.

12th July -  Off the coast between Torrevieja and Alicante measuring 2.4 degrees on the Richter scale recorded at 22.31 at a depth of 19,000 meters 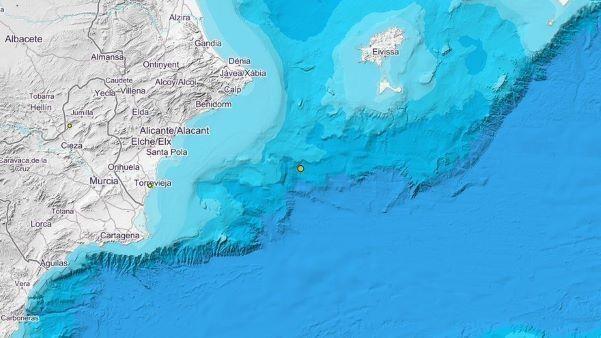 14th June - Benifallim, in the region of L ́Alcoià, (just inland of Benidorm) has suffered an earthquake at 09.00 on Monday, as reported by the National Geographic Institute. The epicenter of the quake registered 1.6 on the Richter scale, located 4,000 meters deep

This latest earthquake turns this small town of L ́Alcoià, Benifallim, into the municipality with most earthquakes in the province of Alicante, with four recorded so far in 2021. 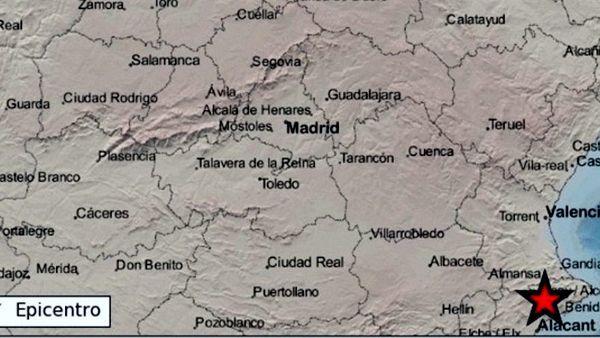 Usually, tremors of a magnitude less than 2.5 degrees are not usually felt by the population.

13th June - El Campello, magnitude 2.3 on the Richter Scale.  Recorded at 12.58 by the National Geographic Institute, just northwest of the municipality of El Campello at a depth of 11,000 meters.  Local Police received no calls, despite this being the most intense in the Alicante province so far this year.

2nd May - Epicentre Tous, (between Gandia and Valencia), magnitude 3.5 on the Richter Scale,  depth 1 km, recorded at 08.24.  The earthquake was felt in other nearby municipalities such as Alberic, Almussafes, Benimodo, L'Alcúdia, Picassent, Rótova and  Xativa, and others. emergency services received calls from Xativa and Canals. 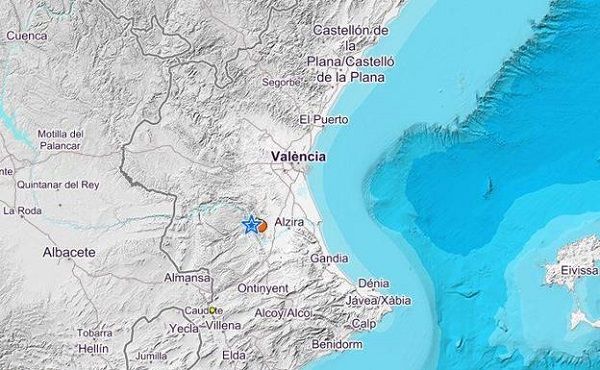 27th April - Recorded just off the coast of Torrevieja, magnitude 2.5 on the Richter scale, depth of 2 kilometers recorded at 01.20hrs. 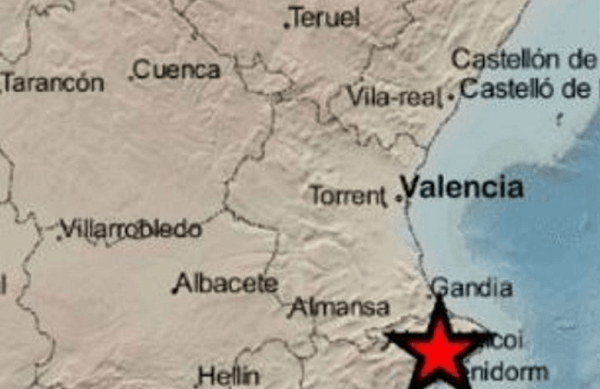