Children in Bars, Spanish Law.  We are always being asked about children in bars here in Benidorm are they allowed?

In plain English children are allowed in bars but only when accompanied by a sensible adult.

However the local police have the right to consider the environment harmful to children which could result in a significant fine for the bar concerned, not to mention a potential arrest for the responsible adult.

This is the reason many bars opt to disallow children completely, whilst other bars use periodic discretion, depending on the individual circumstances on the night which here in Benidorm could just mean the type of clientele in at the time, just how busy the venue is or the type show on stage.

A heavy police presence in the area will often result in the bars choosing the safe option on that night.

Use the Whats ON Guide to find suitable entertainment

Things to do for Families in Benidorm

Spanish law defines anyone under 18 to be a minor. Any unaccompanied minors that come to the attention of the Spanish authorities (for whatever reason, but particularly in connection with criminal incidents or when in hospital) are judged to be vulnerable and may be taken into a minors centre until a parent or guardian can be found.

You must provide photographic ID (your passport) if requested by a police officer. This includes the Guardia Civil and national, regional and local police forces. The police have the right to hold you at a police station until your identity is confirmed. Ignoring direct requests or challenging a police officer may be viewed as ‘disobedience’, which is a criminal offence.

The legal drinking age in Spain is 18 years old

You can drink alcohol at a restaurant if you’re with older people....The law applies to the restaurant as well but you can do it as long as you are supervised by older people. The waiters cannot intervene if you mum ordered it and then gave it to you but be sure to don’t overdo it and take advantage of it. The restaurant could be fined.

Those under the age of 16 may purchase beer or wine if accompanied by parents - If children under the age of 16 who wants to try the wines in Spain, then a parent or an older person would proxy the person under 16 to buy alcoholic beverage. The law does state that it is illegal for minors to buy alcoholic beverages but the law does not make any reference about drinking inside homes.

It’s okay to let minors have a taste - As we all know, Spain is famous for its high-quality wine production so it wouldn’t hurt to let minors just to have a sip, so they would know what it tastes like. The law is about buying or selling any alcoholic beverages to minors but if the parent is the one who gave it, it is an exemption but just a minimal amount enough for minors to taste.

Usually, bartenders and sales people are not really concerned - We are not suggesting it is totally okay to drink alcoholic beverages if you are a minor but if you look older than your age, bartenders usually won’t ask for your age or your identification card. But you still have to be careful. Better safe than sorry.

There is another law that does not allow stores to sell drinks after 10:00pm - Well, if there is a law about minors being forbidden to buy alcoholic beverage, then there is also a law that forbids store to sell drinks after 10:00pm to avoid “botellion”. It is a Spanish phenomenon where there is a street party with lots of noisy drunken people, disturbing neighbors, and damaging public places.

Legal alcohol drinking age in Spain is a federal law - In Spain, every state or region should follow the law about the legal drinking age of 18 years old. No exemption.

Children can come if accompanied by their parents or legal guardians demonstrating that they are full, under his/her responsibility, as long as the establishment's activities do not cause harm in their physical, psychological and moral.

Harmful Places:
Spanish law does not allow children and young people under 18 years being in these kind of places. If parents or legal guardians will allow children (or even accompany them) this can be seen as committing a crime and they may lose guardianship. 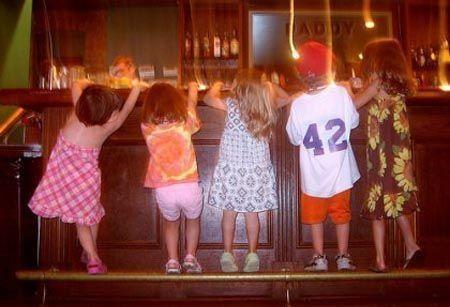 Places for gambling:
Spanish Law do not allow this for people under 18 years.