Why not have a day out with a difference and enjoy a day trip to Ibiza (Eivissa) which is easily accessible via ferry from Denia.

Currently there is just the 1 ferry company operating this ferry service, Balearia.

The crossing operates up to 21 times each week depending upon the time of year.

Balearia makes the ferry crossing from Denia to Ibiza in just two or three and a half hours, depending on the type of ferry you book the modern Super Fast Ferry or the ferries where you can take your own car, Ibiza is 124,1 Km from Denia. 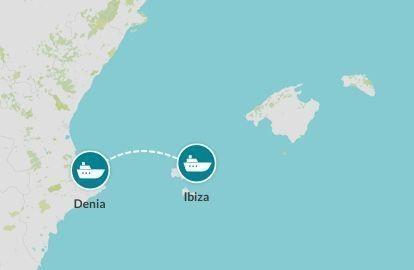 Ibiza is situated in the Mediterranean Sea, located to the east of the Iberian Peninsular off the coast of Valencia. Ibiza ferry port is situated in the main town and is easily accessible, by road and public transport. The port offers a full range of passenger services and facilities

Baleria are the leading shipping line for passenger and freight transport for Balearic Islands crossings. 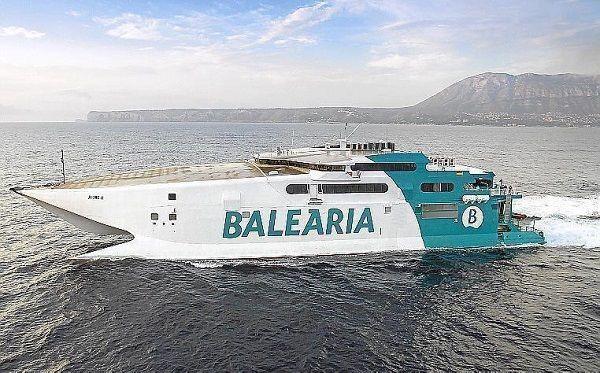 They are global pioneers in the use of natural gas: in 2019 Baleària was the first shipping line to use this clean source of energy on the Mediterranean and in the Canaries, they will have a gas-powered fleet of 9 by 2021, including newly built ships and engine replacements, an investment of 380 million euros.

Travelling with your pet by ferry from Denia to Ibiza 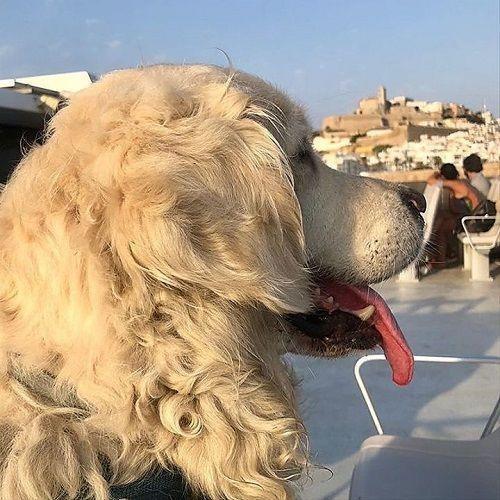 It is important to contact the company before booking the ticket.  It is important for passengers wishing to travel with a pet to be familiar with the company's regulations so as to make their booking correctly and have all the required valid documents available.

Documentation: to move around Spain it is necessary for the animal to have the vaccination card, you must carry the boarding pass or ticket corresponding to the animal.

Embarking and disembarking with pets

At the point of embarkation you may be asked to show your pet's valid health card. Remember that it is your responsibility to fulfill the necessary requirements in order to travel with your pet in accordance with the legislation in force regarding the possession of animals and compliance with the necessary health and safety measures for the animal's well-being.

Food and water : it is important not to vary the dog's diet during the holidays, water is needed regularly, the silicone folding containers are very handy they are lightweight and take up little space.

Excrement bags: ALL waste must be lifted. Baby wipes are also very handy in case something gets dirty or stained.

Leash and collar with identification plate: although dogs should be micro-chipped, a leash/collar with details is also useful

Sweets/treats to reward him when he behaves well and toys to relax and enjoy during the holidays, he is also entitled to his leisure time!

A towel: essential if you are going to a beach or river. It can also be used for sleeping.

If you know or suspect that your dog may become dizzy or very nervous during the journey, talk to your veterinarian about the possibility of supplying any drug to make the trip more bearable.

Things to do on Ibiza

The port area itself is full of bars and restaurants and the shops remain open until midnight, reasons that make it one of the liveliest areas of the island.

Ibiza City - Located in the south of the island, Ibiza is especially known for its lively nightlife 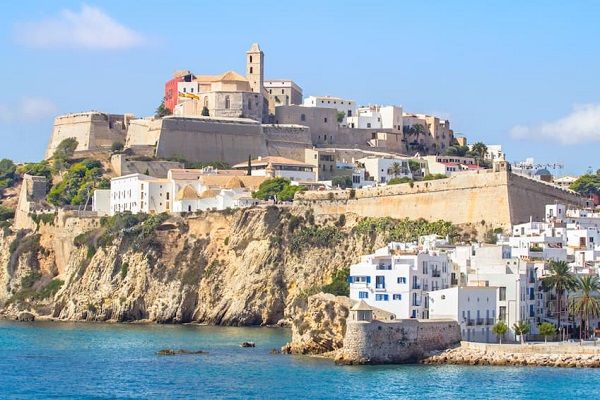 Located in the upper part of the city, the old quarter known as Dalt Vila is surrounded by a wall built in the 16th century to protect the city from pirates and Ottomans

The steep cobbled streets of Dalt Vila are full of small whitewashed houses, walk to the highest point where  there are exceptional views. In this area there lots of restaurants.

The Ibiza Cathedral, located at the highest point of the walled city of Dalt Vila and is one of the most characteristic symbols of the island, on a clear day you will be able to see the island of Formentera.   The Cathedral is an architectural mix, since although originally built as a Gothic temple, only the tower retains in this style. The subsequent construction of the city's Renaissance walls endangered the stability of the Cathedral and it has since been remodeled in the Baroque style.

Its official name is the  Cathedral of Santa María or Virgen de las Nieves and it has a curious history. Before the Catalan conquest in 1235, the Christian troops took the oath that they would dedicate a temple to the Virgin. After the troops entered the city on August 8, they decided to dedicate a temple to the Virgen de las Nieves due to its proximity to its name day, which was on August 5th.  On August 5th, Santa María is celebrated as the Patron Saint of Ibiza and it is a holiday throughout the island (in addition, on August 8th it is a holiday in the city of Ibiza). Plaza de la Vila the bastions of the wall (great views)

Masses are celebrated throughout the year in the Ibiza Cathedral (Thursdays, Sundays and holidays at 10:30 am.

The temple opens its doors from Tuesday to Sunday, Entrance is FREE

This is the biggest open area inside the fortified town, after the Portal de Ses Taules and the Portcullis. This square, that is tranquil and solitary in winter, becomes a vibrant and bright space, full of terraces, restaurants, boutiques and art galleries in summer. 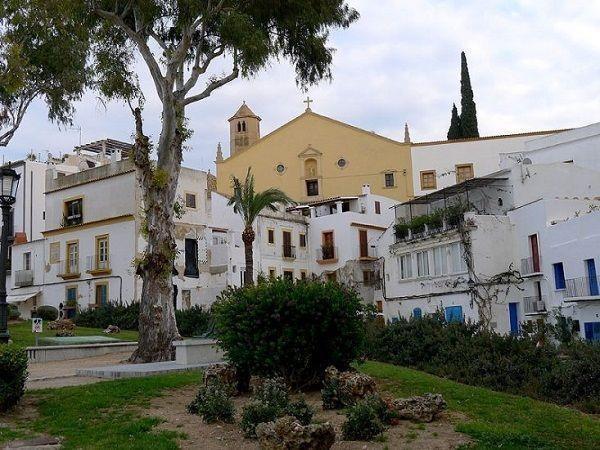 The former Dominican monastery has been the home of the Eivissa City Council since 1838.

This monastery was one of the last ones founded by the Dominican monks in the Balearic Islands during the 16th century. The monastery was first located in the village of Jesús, in the premises of the parish church until it was relocated to within the city walls in 1587. The following year, the premises bought by the Universitat (the regional autonomous government at the time) were handed over in a formal ceremony for the construction of the monastery, which lasted throughout the 17th century. By 1674, the cloisters were still not finished and the monks did not have comfortable rooms.

The community of monks was dissolved in 1835, the building passed into state property and became the site for the City Hall, prison and other services.

Having undergone various necessary alterations due to usage requirements, today’s building preserves only one of the monastery’s cloisters and the former refectory, which was previously used for the plenary meetings of the Council. This room has a barrel vault decorated with painted murals and is today the temporary home of the Eivissa Contemporary Art Museum. 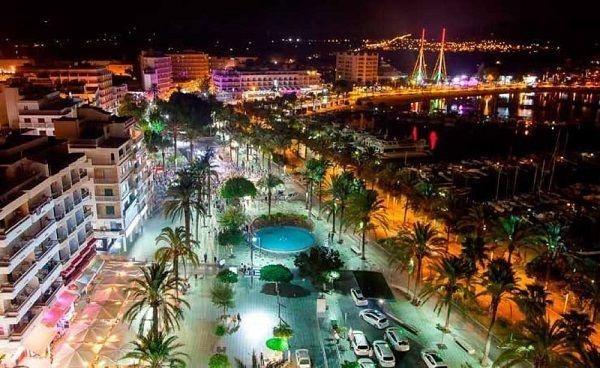 Called Portus Magnus in Roman times due to the remarkable breadth of its bay, San Antonio (Sant Antoni de Portmany) is an old peasant and fishermen town that has become one of the main tourist centers of Ibiza.  This area has a wonderful promenade which is a pleasant place to walk during the months of May, June, September and October. During July and August it fills up with young foreigners looking for a party.

One of the most peculiar places in San Antonio at night is Calle de Santa Agnes, a meeting place where during the night, this street becomes busy with people in costume looking for a party

Cala Salada is one of the most visited coves on Ibiza and is usually very busy, but after walking a winding path through the rocky cliff on the shore, it is possible to reach Cala Saladeta, a somewhat quieter beach, both have golden sands and crystal clear waters. 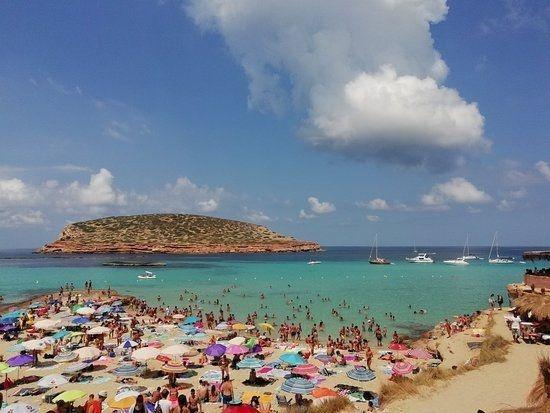 These again are formed by two pleasant coves, Cala Conta and Racó d´en Xic, two entrances located in front of several islets that emerge to create a postcard image

Las Salinas Beach owes its name to the large expanse of land in the south of the island where the sea is allowed in to allow the water to evaporate and obtain salt. Next to the beach, the only train tracks on the island that the trains that transported the salt circulated years ago still remain.

Located in a beautiful natural enclave in the north of Ibiza, Can Marçà is an impressive cave more than 100,000 years old, located inside a cliff in Port de Sant Miquel.

The cave was discovered by groups of smugglers who used it to hide their goods in the past and you can still see the marks which they used to marked the entrance and exit. Since the 80s the cave has become one of the important tourist destinations on the island.

One of the most important parts of the visit takes place during the outdoor walk on the beautiful cliffs that leads visitors to the entrance.

During the 40-minute tour through the cave it is possible to enjoy some amazing stalactites and stalagmites which were created due to the water that flowed through the cave.

This island is known for its shopping areas with streets lined with everything from luxurious boutiques to quirky traditional shops selling one-off items. Whether you’re looking for big-name labels or local bargains.

Have you experienced the ferry from Denia to Ibiza? if so share your experience in the comments section below.