Sierra Helada Benidorm is a natural park and includes the areas of  Benidorm, L'Alfàs del Pì and Altea. Sierra Helada means Ice mountain in Spanish. The name is said to come from the way the cliffs look from the sea on a moonlit night. Fisherman on the Mediterranean Sea found that the rocks looked like an iceberg and also due to the cliffs orientation which creates a colder macro-climate.

It is a protected site with a total surface area of 5,564 Hectares, 4,920 hectares of which are a marine reserve and in these waters are some of the most interesting underwater areas of the Mediterranean peninsular.  The coastline is one of the most beautiful in the Valencian region.  The park also includes three islands: Illot de la Mitjana, the Illot de Benidorm and the Illots of Olla and la Galera.

The summit of the Sierra Helada is 439 meters above the Mediterranean Sea.

The terrestrial part of the park is mostly made up of limestone which is millions of years old and protected fossil dunes, you will find a large variety of protected native plants.  This area also incorporates Benidorm´s famous Cross (La Cruz), Watchtowers and Albir Lighthouse.

In ancient times, the main use of the Sierra Helada was for mining for the extraction of ochre. There is evidence of its use since the time of the Phoenicians. This resource was exploited until the middle of the last century. The main remains are found on the way to the lighthouse of L’Albir and in the Cala del tío Ximo area.

There are 3 walks available  - Albir lighthouse,  Punta del Cavallo. For the more adventurous, the crossing of the Serra Gelada is perfect for hiking, with a distance of 8 km and a duration of about 4 hours.

Start the tour at the end of the Levante beach head up hill on the road leading to the  Benikaktus hotel on the street Alcalde Manuel Catalan Chana.

Via the paved road, we will proceed straight up, passing to the left  the route to the cross (route 2, yellow) and proceed until we  find a detour which descends to the viewing point of the Punta Llisera and Tio Ximo Cove.

Along the cove you can see the old ocher mines, where, not long ago, Tio Ximo worked with his donkeys.

Watchtower: back on the road and to the right hand side access a road with restricted to motor vehicles, where we will go to the Punta del Cavall,  a seventeenth century watchtower. 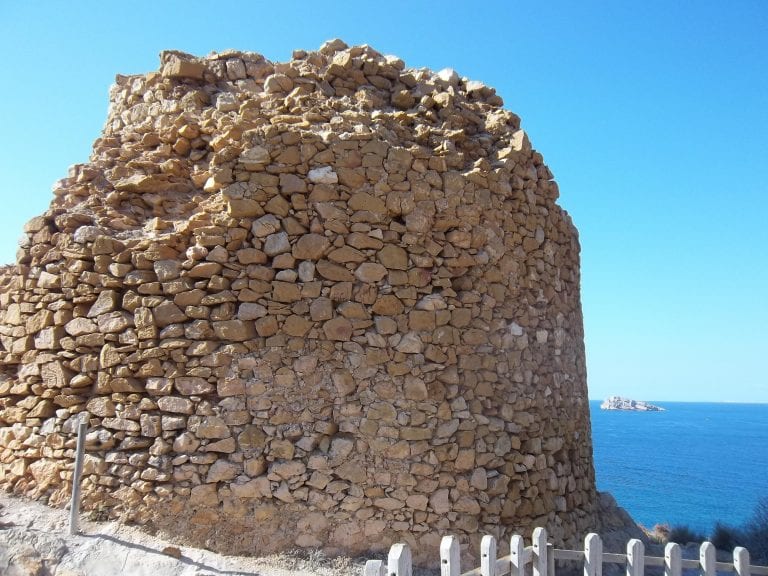 From here there are some of the best views of the cliffs of the Serra Gelada and very close to them, Illa Mitjana. Both here and the Punta Bombarda in Albir, are excellent vantage points, hence why in medieval times, the watchtowers were built to alert the public of the presence of pirates.

Starting from the Information Point Albir (Alfas del Pi), walk up the  street "Cami de la Cantera," which as its name suggests ends in an old quarry from which stone was quarried, turn to the left at the streets "Syrio" and "Neptuno", until we reached a parking area where one of the entrances to the Natural Park can be located, the route to the  Albir lighthouse.

A few metres ahead there is a small recreation area. From here also the yellow route  starts that climbs to the crest of the Serra Gelada.  "Caleta del Metge" and viewpoint We head up the paved route towards a tunnel in the mountain, but just before on the left hand side is a dirt track which descends to a small cove known as " Metge Cove, "and soon after there is a circular balcony with  a magnificent view of the bay of Altea in the background the  Penyal d'Ifach (Calpe), surrounded by spectacular mountains. Arriving at the entrance of the tunnel, we can find another smaller viewing point. 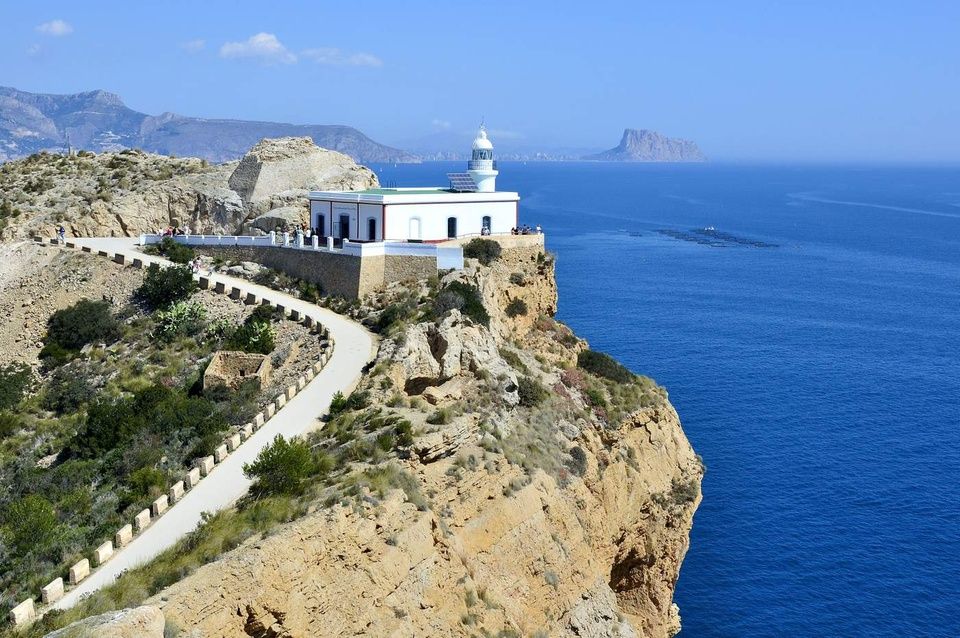 Ocher mines cove "La Mina" We continue to the lighthouse and after travelling 300 metres, we come across the path that slopes down gently to the mines of Phoenician origin and subsequent Roman exploitation, from which ocher was extracted to be used as a dye well into the century, when it fell into disuse after the introduction of other new substances for this activity. The "Boca of the Balena" About 500 metres after  the tunnel we arrive at  a bend in the road  where to the right and above you can see in the shade of the mountain a natural hollow known as the "Mouth of The Balena "or" Cova de Bou ". Albir lighthouse at the end of the road we reach the El Faro del Albir  where access is not permitted. Just before reaching the light house there is another viewing point to the right.

Off the coast of Albir, there are lots of fish farms which attract dolphins. These Fish farms help repopulate the fish in the Mediterranean sea by allowing the fisherman to only catch fish from the farms.

Due to being quite a moderately strenuous route it is suggested you take plenty of drinking water with you as there is no where to stop along the way. The route in some areas is steep up and down..

We start our tour from the recreational area of the Albir, on  (red), with a steady climb in zigzag that starts with a stone step path to reach the access road to telecommunication station , passing next to an old quarry.

"Alt del Governador" At the end of this path we will reach the highest point of the Serra Gelada (438 m), where a telecommunications station is located. Continuing down a paved road will link back to the path (4).

Near the edge of the cliff is a trig point where we can see the magnificent cuts of the cliff, and view specimens of the  yellow-legged gull flying several hundred feet below our feet.. "L'Illa Mitjana" The route through the Sierra continues with continuous ups and downs, passing the ruins of an old coast guard house and a small well in the valley.

Halfway we find an area where there is a small area of pines where we can relax for a few  moments, offering a beautiful view of the "Illa Mitjana." 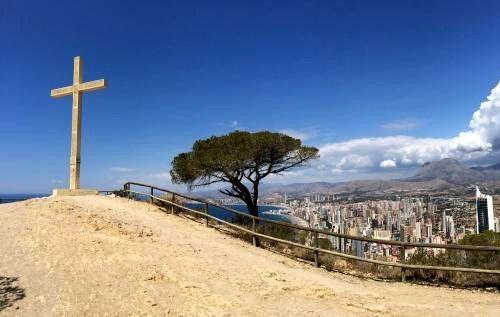 The Cross The last stretch of mountain route passes through a high area where we can contemplate again the view of Benidorm from Sierra Helada and the  cliffs. From this milestone we must be careful to keep to the path that passes through low vegetation or on bare rock. A few minutes later you come to a cross  located above the Raco de l'Oix, where there is a tarmac track which connects to the blue route.