All about Spanish Chorizo

All about Spanish Chorizo

A guide to the types of Spanish chorizo, learning how to cook with it, and enjoying spicy and delicious sausage.

Basically its a sausage

It’s made from chopped or minced pork meat and fat, sometimes with beef as well, macerated with sweet and hot pimentón (paprika) or the pulp from choricero peppers, plus pepper, garlic and oregano. The pimentón gives chorizo its distinctive ruddy-red colour. The sausage also acquires a subtle smoky flavour from the use of smoked pimentón, pimentón de la Vera. After stuffing in casings, the sausages are air-dried. Lactic fermentation gives chorizo an appetizing tangy flavour.

Chorizo is made in short or long and hard or soft varieties; leaner varieties are suited to being eaten at room temperature as an appetizer or tapas, whereas the fattier versions are generally used for cooking.  (Mexican chorizo differs totally from Spanish Chorizo, Mexican is usually highly spiced and is a fresh sausage and must be cooked before eating). Spanish chorizo is made with garlic and pimentón (Spanish smoked paprika, either sweet or hot), which gives it its deep brick-red colour and smoky flavour.  It is generally classed as either picante (spicy) or dulce (sweet).  A rule of thumb is that long, thin chorizos are sweet, and short chorizos are spicy, although this is not always the case.

Chorizo is Available Both Fully-Cooked and Semi cured

“Soft” chorizo is tied off into short links, en ristra. It has more fat content than hard chorizo and is semi-cured. Although soft chorizo can be consumed without cooking, it is best when added to stews, such as that aforementioned Lentil Pot; grilled (over charcoal or on a grill pan), or fried (super with a pair of eggs fried in chorizo fat) 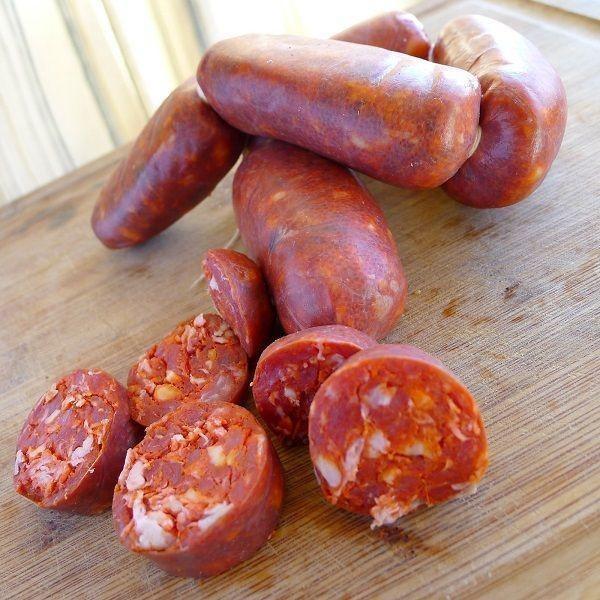 Dry-cured, hard chorizo, while it can be used in cooking too, is meant to be served sliced as a cold cut. The mixture of pork and fat is very compacted, giving a texture somewhat like salami. Served with bread, sliced hard chorizo is a delicious tapa or snack.

Hard chorizo comes in several shapes, such as thick rolls, cular, or thinner “candle” ones, vela. Pamplona chorizo is a version that is more finely chopped. Chistorra is a skinny loop of Pamplona-type chorizo. Chorizo from Asturias, in northern Spain, is smoke-dried. When chorizo is made from the meat of ibérico breed of pigs, it is labelled Ibérico and is considerably more expensive than chorizo made from ordinary pigs. There is also chorizo made from jabalí, wild boar.

Spanish chorizo is often made from cuts like cabecero (from the neck to the fifth rib), lomo (loin), papada (jowl), and panceta (belly). Pork shoulder is a good substitute if those cuts aren’t available, but with a total fat content around 40 percent, the use of tocino (pork back fat) in chorizo is non-negotiable. Spanish-style chorizo gets its flavour and bright red colour from pimentón (smoked paprika), but other types of chorizo lean more towards pink, brown, or even green.

Spanish chorizos are classified both by level of curing and by their ingredients, but they always include pimentón (smoked paprika), which gives Spanish chorizos their bright red colour.

1.  Spanish soft chorizo can be loose (known as picadillo) or in a casing (chorizo fresco). This fresh, raw sausage is typically made from pork meat, pork fat, paprika, crushed red pepper, and garlic and must be cooked before eating.

2.  Spanish chorizo semicurado is semi-cured: It’s fresh sausage that has been fermented and possibly smoked, but not dried. The fermentation process adds acidity and extends the shelf life of semi-cured chorizo, but this type of sausage still needs to be cooked before eating.

3.  Spanish chorizo curado is cured or fermented and dried until hard and shelf-stable. This type of chorizo typically eaten uncooked, thinly sliced for a simple tapa.

4.  Chorizo riojano is produced in Rioja, Spain, and seasoned with garlic and both pimentón picante (spicy) and dulce (sweet/mild). It’s available cured or semi-cured.

6.  Spanish chorizo Navarra is seasoned with pimentón dulce and garlic.

Remove the Outer Wrapper Before Cooking with Chorizo

If you're new to cooking with chorizo, this tip will come in handy: You're supposed to remove the casing before cooking.

It lasts two weeks in the refrigerator. Once you slice it, however, it is only good for another week.

Chorizo is Not a Health Food

Delicious as it is, chorizo is a high-calorie, high-fat, high-sodium food. It is low carb, though.

Before cooking with chorizo, make sure to read the recipe carefully to see which type of sausage is called for. If the recipe specifies Spanish cured chorizo, do not substitute Mexican chorizo and vice-versa. Mexican chorizo needs to be fully cooked before it can be eaten.

Cooking with chorizo is amazing. It adds so much flavour to recipes. Enjoy the cured sausage in appetizers, rice dishes (like paella), and soups. For the fresh sausage, choose to grill, braise, or fry them. Or remove the sausage meat from their casings, saute the crumbles, and use as a filling for tacos or as a topping for omelettes. There are so many possibilities! Is there any difference between Chorizo and Pepperoni?

Yes, there is. Pepperoni is an Italian-American dry-cured sausage generally made with a mixture of pork and beef, although sometimes other meats such as turkey or horse are also used in the making. Chorizo is made with pork meat only, and as we already mentioned, it can also be fresh.

The other element that differentiates Spanish chorizo from any other paprika-powered sausage is the use of Spanish pimenton, a type of paprika which is always smoked using oak or holm oak wood. This gives the pimenton a very characteristic smoky flavour which makes it unique and different from any other sausage or dry-cured meat.

What should you drink when eating Chorizo?

Chorizo has an intense flavour and aroma. If you are eating it as part of a stew or simply on its own, a full-body red wine seems to be the right choice to pair it with. Try it next to a glass of Somontano, Ribera del Duero or Rioja wine.

If you are having a dry-cured chorizo sandwich, grab a cold beer and welcome yourself to heaven!

Pork Braised in Sherry with Tomatoes and Chorizo

Spanish Chicken with chorizo and potatoes

All about Spanish Wine

All about Spanish Cheese