La Vila Joiosa, Villajoyosa literally means the 'joyful village'. It is famous as a centre for the production of chocolate, which could be the reason for its name! The town has three chocolate factories, all of which can be visited. The Valor Chocolate factory is perhaps the most famous, but there is also the Perez Factory and the Clavileno Factory, so you'll be spoilt for choice!

La Vila Joiosa has over 3 kilometres of beaches, a lovely marina, a beach front promenade all along the central beach and the iconic multi coloured houses of the fisherman. La Vila joiosa is also well known for its impressive Moors and Christian Fiesta usually held during the last week of July where there is a live re-enactment of the landing of the Moorish Army on the beaches at dawn, an all-day battle which is finally brought to a close when the Arab leaders and their armies are thrown into the sea. 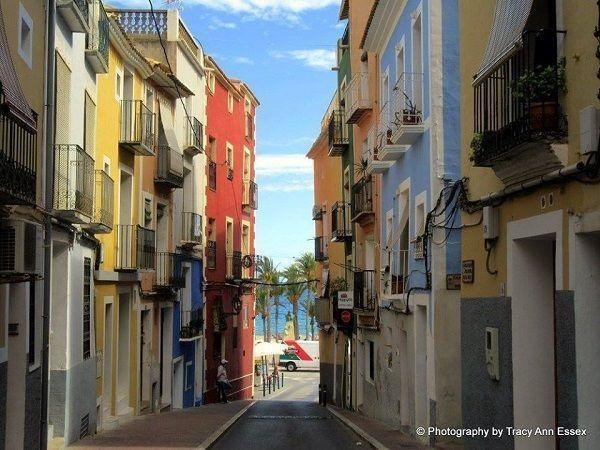 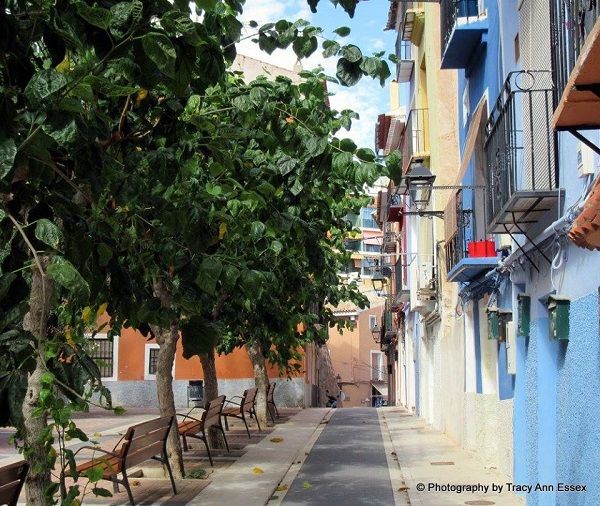 All About La VILA JOIOSA

One of the most important monuments of the city is the Iglesia-fortaleza de la Asunción, built in the XVI century this is one of the three church-fortresses of the province of Alicante and declared an Asset of Cultural interest.  The church is located in the old town with its main entrance located in the Plaza de la Iglesia, number six. 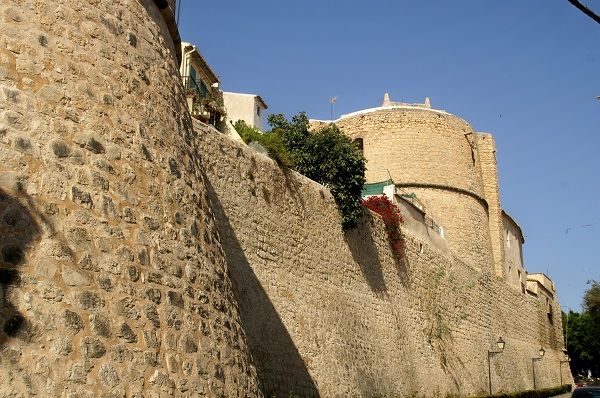 Being a fortress church, it was not only used for worship and prayer but also for defence against pirate attacks, the apse serves as the tower of the wall. As a fortress, it had windows for archers or, later, soldiers with pistols or arcabuces, to fire. In this way they could defend the population that was hiding in the church.

Parking: is on the side of the road wherever there is space.

From here: the chocolate factory is right beside you enter for your tour of the museum. More information here. 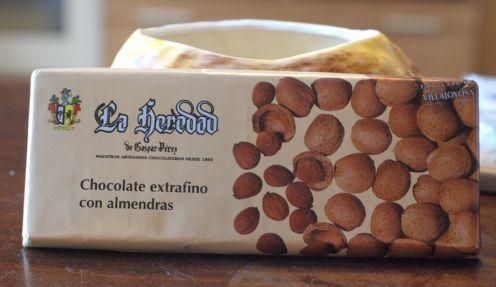 Mr Perez the current generation owner will guide you around this beautiful, traditional chocolate factory. Watch the chocolate being shelled, ground and melted.

You will experience such a unique and genuine insight into a chocolate factory who still follow traditions from over 100 years ago.

The chocolate shop awaits you! A secret door is unlocked, and you walk into a traditional and fantastic small shop of pure chocolate heaven.

Devour samples of freshly made chocolate and treat yourself to a bar or three of the exceptional Perez Chocolate. 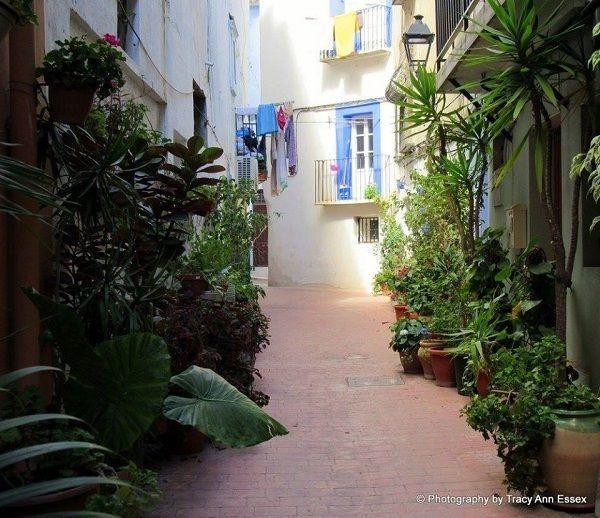 Visit the Roman ruins of Allon

Located in Vila Joyosa was the ancient Roman city of Allon.  The remains of these Roman Baths are very well-preserved. Masonry walls, as well as service rooms and a sauna enclosure with several heat rooms, are among the remains.  These baths can be found on Canalejas Street. Recovery work for these Roman baths is still ongoing. 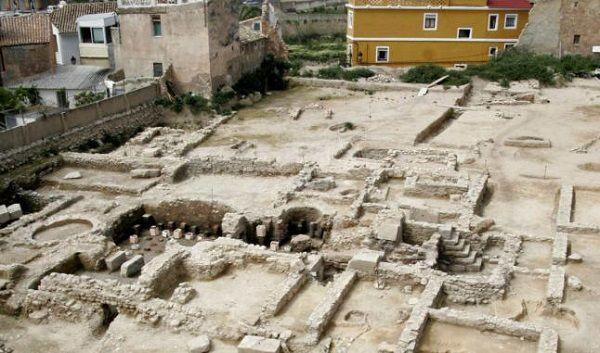 All About La VILA JOIOSA Villajoyosa

Torre Malladeta - Visit the 19th Century Tower.  This is situated just south of the town and gives you wonderful views in all directions. The tower was built by a famous politician, head of the Republican Party, and psychiatrist Dr. José Mª Esquerdo, at the end of the 19th century as a place of study. From there, he also controlled the psychiatric wards of the sanatorium he had in La Vila, located on the Paradís beach. The Iberian sanctuary, dedicated to the Mother Goddess (the Tanit of the Carthaginians) built in 4th century BC was once located on the slope and top of the hill, where the 19th century tower can now be seen.  In the year 100 B.C. the former buildings were demolished, and a series of rooms were built on terraces on the hillside. Fourteen of them have been found.  There are information boards giving you a detailed history of this area.

It is said that if you stand at the tower during equinox (21st - 22nd March and September) sunrise can be seen rising in a spectacular display from the top of Benidorm´s Island, this phenomenon was used to calculate the beginning of the agricultural year. Also, here you will find 'Villa Giacomina'. A rural mansion which was built in 1920. There is a network of paths with fantastic views of the Mediterranean and a small cover of rocks and crystalline water 'la cala de la Malladeta' quite difficult to access between the cliffs, but well worth to visit.

The main beach in the town centre of Vila Joiosa. A lovely wide sandy beach with palm trees with pedestrianised promenade lined with bars and restaurants. 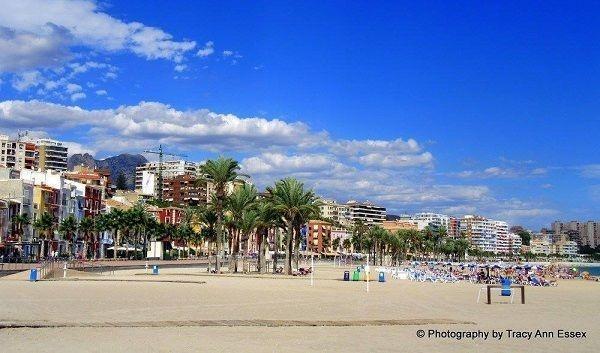 Two kilometres south of the town centre of Vila Joyosa, a very quiet beach ideal for fishing and nude bathing as this is a nudista beach.

To the south of Vila Joiosa, this pebbly Beach is the beach that is used by the Euro Tennis hotel and the five-star hotel El Montiboli 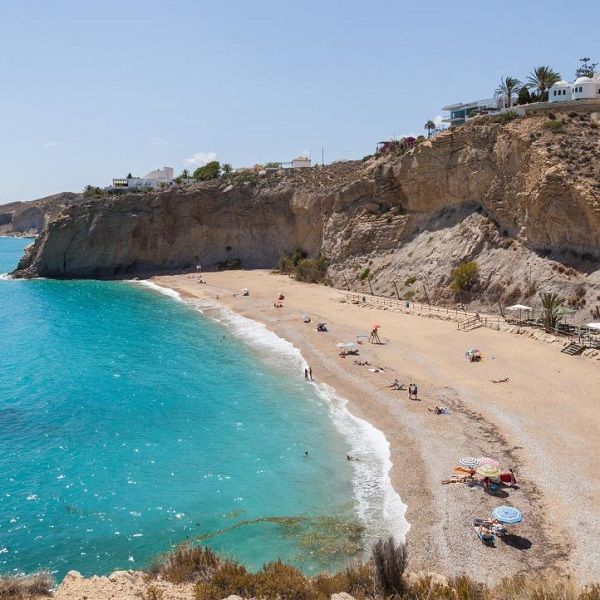 To the south of Vila Joiosa and also sometimes known as Bol Nou, nice, sheltered bay with good sand and with a beach bar, known in Spain as a Chiringuito

Good beach with lovely palm trees, just south of Vila Joyosa and one of the most popular beaches. To the north of Vila Joiosa and the Torre beach pebbled but very quiet and hard to find so it is a good beach to escape the crowds. A nice place to walk and have a drink at the beach bar.

Popular beach just to the north of the town centre and port. Good quality sandy beach, busy with beach bar

This quiet beach is the southernmost beach in Villajoyosa, it is noted for the famous Xarco watchtower.  Situated in the area of Tossal del Mar and accessed from the N-332 road.

The oldest archaeological remains found in the city date back to the bronze age and are remains of an ancient Iberian settlement. But it was not until the time of the Roman Empire when the city was an important economic and social growth becoming a major city of Hispania. you can still see the ruins of Allon, as the town was named during Roman times,

In the Middle Ages, this was an uninhabited region when Jaime II of Aragon decided to found a city in the 1300s to repopulate the area and protect it from the Barbary pirates, who at that time were pillaging and terrorizing the coastal populations. In the 16th century, seeing that pirate attacks were continuous and relentless, Philip II had built new walls and a system of defensive towers around the coast to protect the city.

This is a based on a historical re-enactment of a famous Moorish Christian battle which took place in 1538, led by Zallé Arraez.  This fiesta includes a full naval landing, battles on the beach, wonderful floral displays, magnificent processions and live music throughout the town.

Getting to Villa Joyosa
Round Town Travel - Choc and Shop coach trip, enjoy a visit to the Valor Chocolate factory and time to shop.
By car

The easiest way is on the N332, it is well signposted heading from Benidorm towards Alicante.

Parking: is in the gravelled car park and is free, situated at the end of the beach.

From here: walk out of the car park and turn right for the sandy beach, promenade and old town.

Parking: is in the underground car park and is charged for by length of stay.

From here: the car park is right beside the sandy beach, promenade and old town.

Top tip: the turning for the pay car park is between the petrol station and a small park with a fountain, the turning is signed Platja Centre.

Parking: is on the side of the road and is free.

From here: the marina is directly in front of the parking spaces, keep the sea on your left and walk along the promenade beside the sandy beach for the old town.

Look at the official website to find out timetables.  Tram Line No 1 will get you from Benidorm to Villa Joyosa in about 20 minutes.  Trams are every 30 minutes and cost around 2€

A taxi from Benidorm will cost approximately 20 - 25€

Find information on other places to visit HERE