All About Orihuela part of the Costa Blanca South  - Orihuela is a town and municipality in the province of Alicante, in the Valencian Community, it is at the southwestern tip of the province and borders the the Region of Murcia, it is the capital of the Vega Baja del Segura region. (Valencian, Oriola, the name of the city is a derivation of the Latin-Visigoth aurariola  meaning golden vase)

Orihuela lies in the fertile Vega (flat lowland) del Segura, The city centre stands 23 metres above sea level on the banks of the Segura River.

The city is well worth a visit for its cultural and natural heritage, especially for its historic center which is declared a historical-artistic and monumental complex.

Local agriculture is helped by a remarkable irrigation system left by the Moors. Its effectiveness resulted in the proverb “Rain or no rain, corn in Orihuela.” In addition to corn (maize), the chief agricultural products are oranges, lemons, potatoes, pepper, hemp, cotton, oats, wheat, almonds, and dates. Orihuela is also famous for its carnations, and it has a traditional shoe and textile industry 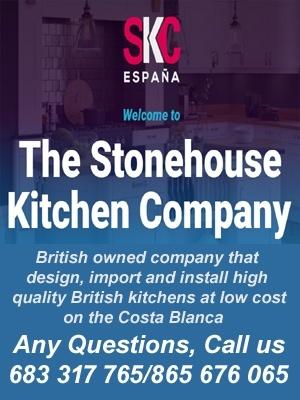 The city of Orihuela is full of museums and religions buildings, the town center is declared a historic and Artistic Monumental due to its rich heritage.  Even if you are not a “cultural” lover, Orihuela is worth a visit.  Take a walk beside the Rio Segura which runs trough the city where you will find many nice shops, restaurants and tapas bars.

The old part of the city is to the north of the Segura River, the new part on the south. Historic buildings include the 14th-century cathedral; the Church of Santiago (once a mosque; rebuilt in the 18th century); the 14th-century Church of Santas Justa y Rufina, with an 18th-century facade; and the College of Santo Domingo (1516–1701), the former university.

The Cathedral was built above a pre-existing Muslim mosque as a simple parish church and was later converted into main church by order of King Alfonso X of Castile in 1281. In 1413, pope Benedict XIII elevated it to the rank of collegiate, until it became a cathedral in 1510. 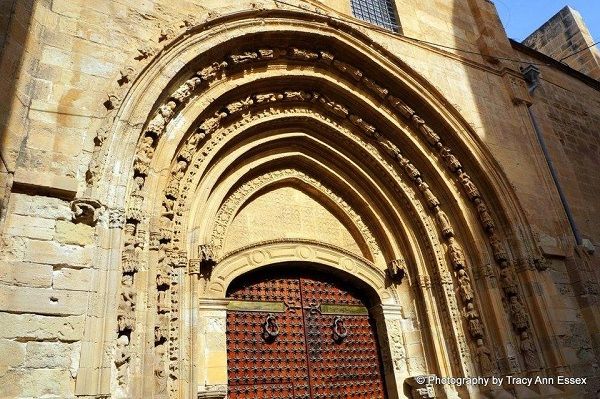 Construction was begun in the late 13th century in Valencian Gothic style, with a Latin cross plan including a nave and two aisles, an ambulatory and chapels within buttresses. The crossing, the late-Gothic great chapel, and the ambulatory are 15th century-early 16th century additions, including the removal of two pillars of the nave to obtain a taller vault at the crossing, after a design by Pere Compte. 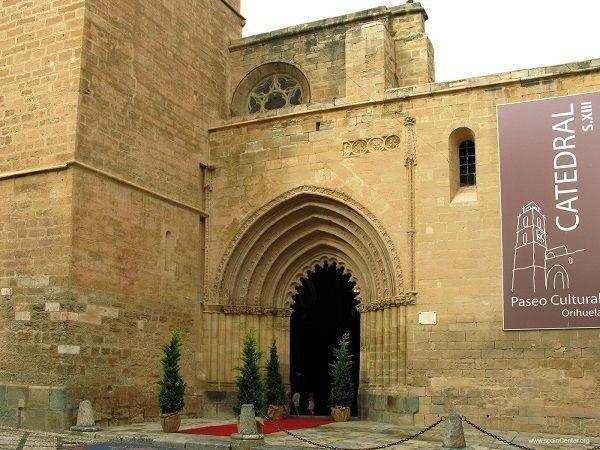 The interior receives little light due to the small size of the windows. There are three entrances: the Puerta de las Cadenas (Portal of the Chains, 14th century) is in Islamic style, the Puerta de Loreto (mid-15th century) is Gothic, and Gate of the Annunciation (at the north, built in 1588 by Juan Inglés), in Renaissance-style triumphal arch-shape. Other Renaissance elements include the stalls and the grills of the choir, and the cloister (originally from 1377, but rebuilt until 1560). The oldest part is the bell tower, which dates from late 12th-mid 14th centuries. It has four floors covered by groin vaults.

Built in the sixteenth century and using marked Renaissance art, this spectacular monument was created as a home for the Dominicans. After the Papal bull of 1569 and the convent was transformed into Pontifical University, working as such until 1824. 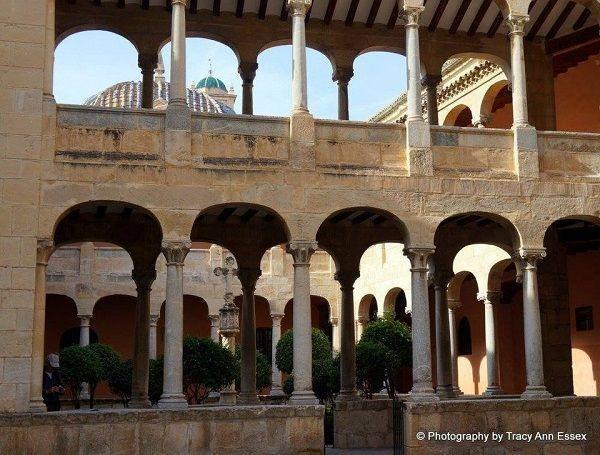 With different facades defining its three doors, a central cloister surrounded by unique arches and a well-preserved church with a Baroque style organ very typical of the ancient Kingdom of Valencia, the Convent of Santo Domingo is today one of the most visited monuments in this city of the South of the Valencian community.

Situated close to the Santa Domingo Diocesan College is the Miguel Hernandez House Museum. This building was home to the poet Miguel Hernandez, and retains the furniture typical of the last century, the house displays photographs and paintings from important moments of his lifetime..

In this house museum there is a feature of a traditional well located in the middle of a garden, a barn and yard, a small orchard where there still remains the famous fig tree under which Miguel Hernandez used to sit and write. 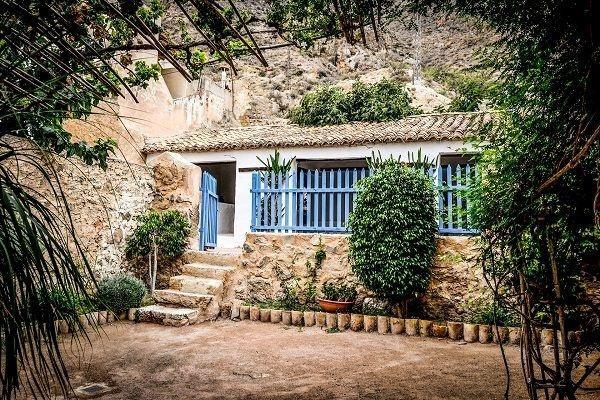 This was actually a traditional type of farm house, very typical of the early twentieth century.

Entrance is Free, this is one of the most popular and visited historical sites in the town.

This is located on  campus of the Miguel Hernández University.

The museum enables visitors to wander around the city layout of Orihuela by the perimeter path and along glazed walkways, and to be able see its layout dating back 1300 years. which enable the visitor to appreciate how the city looked during previous times.   Alongside the ruins are display panels and models, The museum also contains a collection of pottery and artefacts found at the site.

This building can be found in the central Plaza del Marqués de Rafal, Fernando Loaces Library is part of a huge new building, but built on the old condal palace Pinohermoso. It is a building where many original details have been preserved; certain elements of the facade have been rebuilt by the Ministry of Culture and Education. 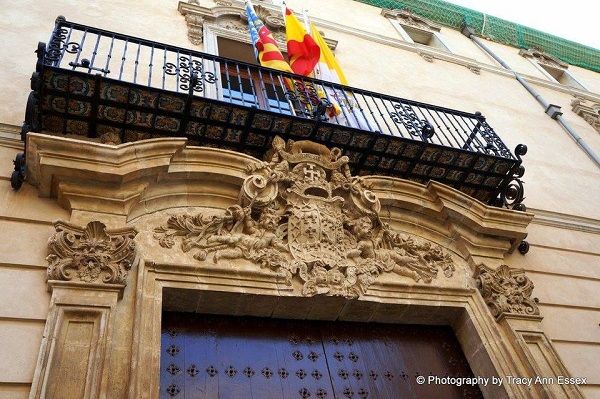 It consists of newspaper archives and more than 500 documentary collections of magazines, newspapers and publications of official character.

Fernando Loeces Library in Orihuela also has an extensive consultation room where books are on loan, and internet access is free. The original multimedia room is composed of more than 11,000 audiovisual documents and 2,500 documents in multimedia format.

The Episcopal Palace of Orihuela is a Spanish religious palace in the Baroque style of the eighteenth century. It is located in the city of Orihuela, capital of the eponymous diocese of Orihuela. This building was the residence of the Bishop of Orihuela.
It was declared a National Monument by Decree of October 31, 1975.

Orihuela castle is located up on the sierra of orihuela, in an area known as Monte de San Miguel and is amongst the oldest architectural monument’s in Spain, built in around 713.

The castle is believed to have been built in the Carthaginian period to protect the city of Carthago Nova, it also conserves Roman and Muslim remains, although it is suspected that the Iberians were the first to settle on the Monte de San Miguel.

Crowning the city and watching over the whole of the Vega Baja, are the remains of this fort which is in a completely ruinous state, although it is frequently visited by hundreds of visitors, especially during the weekends. 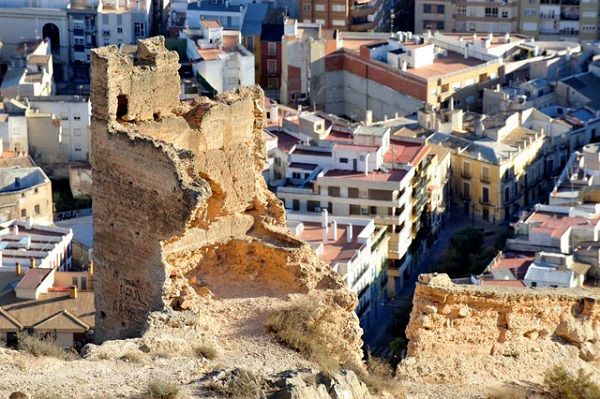 Getting to the castle - It is possible to drive part of the way up the mountain. Whether driving or walking, follow Calle Colón Zen up through the old town, the road then becomes Subida al Seminario which winds its way uphill to the San Miguel Diocese Seminary & Education Centre. There are signs for the start of the trail at the back of the seminary. These however seem to point you downwards on a longer route. It's best to just head upwards and as you climb you will find rocks with blue dots and yellow arrows marking the way. These are pretty faded so at times you will just be following your nose along what looks like an old track.  Its quite a climb to the top of the castle but the views are simply stunning and reach far across the Veja Baja del Segura, so its worth the effort.

Orihuela is a pre-Roman settlement, it became the Roman Orcelis. Captured by the Moors in 713, it was finally liberated by the Christians in 1264. It was sacked during the disturbances at the beginning of the reign of Charles I (Charles V of the Holy Roman Empire; 1520) and again in the War of the Spanish Succession (1706). Orihuela suffered several epidemics of plague, was partly destroyed by an earthquake in 1829, and has often been flooded by the Segura River.

The city was named the first city of the province of Alicante, 11 September 1437.

In 576 it was the capital of the Visigothic province of Aurariola, to which it gave its name. In 713 (5 April) the military man and Count Teodomiro, proclaimed himself King of Tudmir.

In 1304 Orihuela was considered to be on the border between the kingdoms of Castile and Aragón. In 1366 it passed to the kingdom of Valencia. 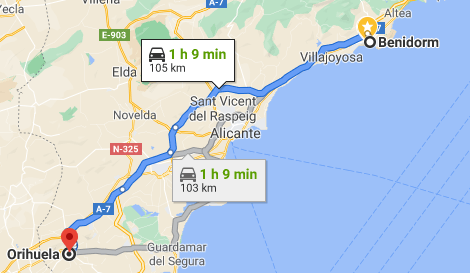 Trian RENFE - Orihuela city has a modern train station just 1 km from the city center, the city is connected by train to the nearby Alicante, Elche or Murcia. Trains from Benidorm to Alicante

As from 1st February 2021 The new train station "Orihuela Miguel Hernández"  is open which provides a new Ave service with direct connection between Orihuela and Madrid.  Journey time is a amazing 2 hours and 22 minutes, with four daily services, two in each direction. This service will gradually expand with demand.