GUADALEST The Village in the mountains near Benidorm

Guadalest, Spain - The Eagle's Nest carved into the Mountain

Located on the CV-70, 25 km from Altea, is the village of Guadalest. Occupying one of the most stunning positions in Spain, this small village is precariously perched on the pinnacle of a granite mountain, giving fabulous views across the valley carved out by the River from which the village takes its name. Getting to Guadalest by the twisting road that climbs ever upwards, passing through the village of Polop, is almost as spectacular as the position of the village, but the breath-taking views make the drive worthwhile even for the more nervous passengers!

Guadalest by bus - The No. 16 goes from the Plaza Triangular generally every day ... but only once a day, The bus starts in La Cala Finestrat at 9:45am, reaching the top of the Avd Mediterraneo at 10:05am and the Rincon de Loix at 10:10am. A single journey costs 3.90€. The journey time from the triangle is a little over an hour, passing through La Nucia, Pollop before heading onto the mountain road. The return bus departs at 1.30pm giving you approx 2 hours in Guadalest.  llorentebus  for details click on the link just in case times have changes or the service is not running.

Visit Guadalest with Round Town Travel

Visit Guadalest and Algar Falls with Round Town Travel

On reaching Guadalest you can see why the Moors, who constructed castles to defend the area, considered this place a site of strategic importance.

Quadalest castle was built by the Moors in 715AD, was an important strategic point at various times in history. It suffered quite a lot of damage from a major earthquake in 1644 and during the Spanish War of Succession in the early 18th century.

However, the building you will see on most of the postcards is the whitewashed bell tower of Penon de la Alcala which seems to cling to the mountain face. 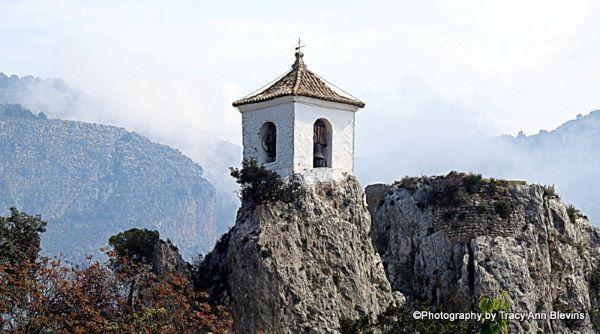 The old village and castle can only be accessed through a 15-foot tunnel carved from the rock and when you reach the other end and see the ancient houses, you seem to have been transported to another time and age.

Below the Portal de San Jose

Guadalest has plenty of museums, so you can learn more about its history, little crafts shops and places to buy a souvenir of your visit. Costing only a few euros the visit through the tunnel to the village is definitely worthwhile as the castle tour (starting at 10am) takes in the dungeon (great for the kids) and offers fantastic views across the valley from cobbled footpaths and lookout points.

The population of only 200 people now dedicates itself entirely to tourism, hence some of the area's best museums being located here. If you want to be transported to another world when land was fiercely defended, don't miss a trip to the village of Guadalest!

The Museo de Saleros y Pimenteros (Salt and Pepper Shaker Museum) has more than 20.000 salt and pepper shakers from all over the world!

Andrea Ludden has collected for more than 30 years, and has another museum in the USA, in Gatlinburg, Tennessee, which has another 20.000!

The museum is at Avenida de Alicante 2, El Castell de Guadalest, 03517 Alicante, directly on the main parking area, and is totally accessible, with no stairs or climbs. It is entertaining, educational, and apt for the whole family. The children love it!

This museum is the work of one-man Antonio Marco and has taken him 15 years to complete.

It is a private museum which opens every day of the year. You can see beautifully decorated doll houses with intricate details, a Nativity Scene and other models made from real bricks, stone and iron. The interiors are exact replicas of authentic houses. 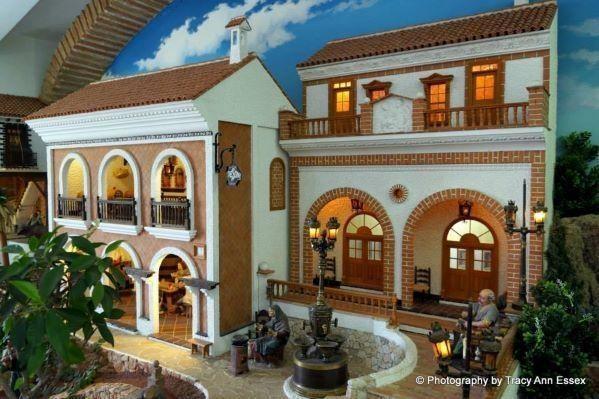 A particularly interesting scale model is the one of a giant Bethlehem. This nativity scene weighs 12 tons and in the style of the early 20th Century. It has received many awards from tourist associations, and the compliments of the Spanish Royal Family.The Nativity Scene required 20 years for its construction, and it is made without using cork, plastic, cardboard, or paint. Instead, stone, tile, brick, wood, iron, natural plants and bonsai were employed.

This museum has two very different collections -: miniatures that you inspect with a magnifying glasses and giant sculptures. 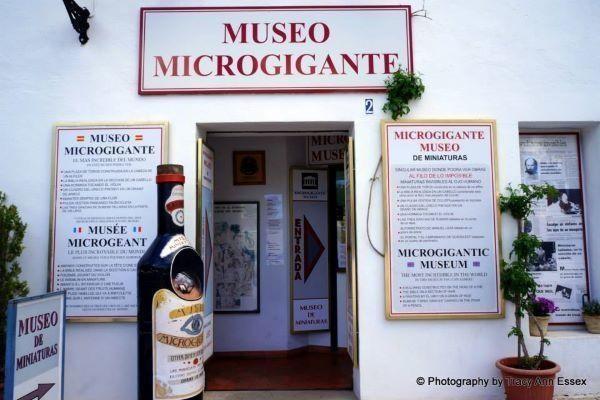 Among the miniatures to be seem are: -

This museum exhibits instruments of torture and execution from Medieval times to the 20th century. Situated in the old town of Guadalest.

The museum is very interesting and has many different kinds of torture devices that have been used throughout Europe. All of them were quite barbaric including the impaling device and a device I like to chop heads off. 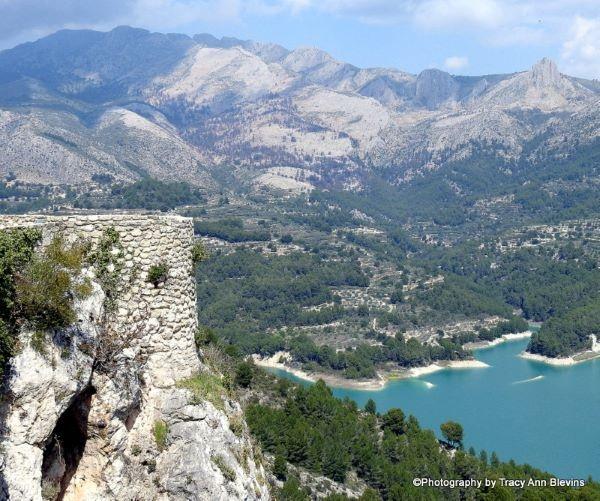 The dam was built across the Guadalest River between 1953 and 1964 and is 73 meters high, 270 meters long and supplies water to many towns and villages in the area, including Benidorm.

You can drive across the dam and along the North side of the lake by taking the turning marked "Embalse de Guadalest" on the road from Guadalest to Callosa. It is also just 5kms by a minor road from Abdet. Follow the (camino rural) road from the bottom of the village all the way to the bridge on the West side of the lake. You could park near here.

Enjoy a lovely walk around the Lake, on minor roads and paths, The journey is about 12.7km (7.9 miles). see map below. 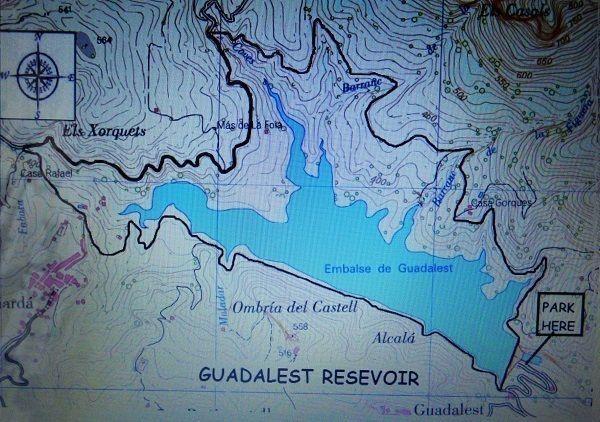 The Guadalest dam is a great place for freshwater fishing, but you'll need a licence.

The green colour is caused by tiny particles of silt suspended in the water. It is perfectly safe to swim in, although not suitable for small children or poor swimmers as the water soon gets very deep. The best access for swimming is from the car parking area at the dam. Go through the gates (where it says dangerous swimming "peligro de bano") you will find some access paths down to the shore.

Did you know that Guadalest has been a location for a number of films?  The town has been the backdrop to a number of popular films like “My Life in Ruins”, the sequel to the successful “My Big Fat Greek Wedding”. One of its producers was Tom Hanks! In the film, part of the town’s main plaza and panoramic views of the Guadalest Basin substitute for Greece.